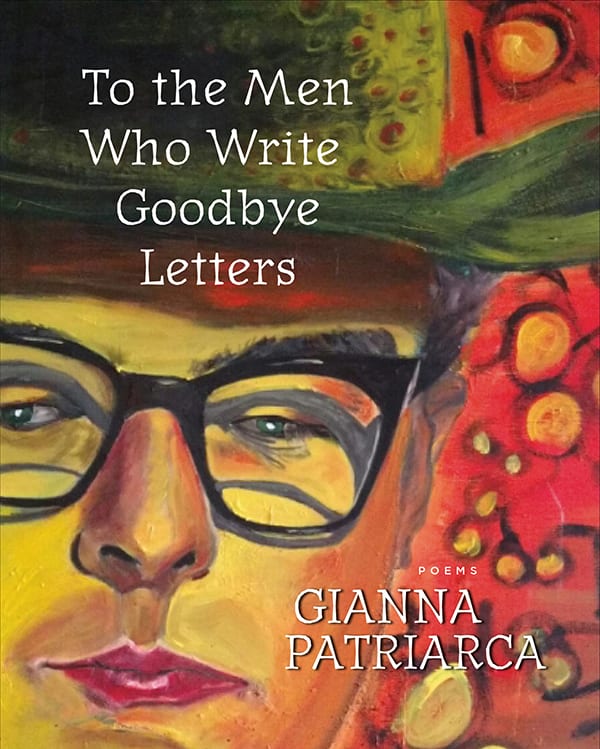 Toronto poet Gianna Patriarca’s new book, To the Men Who Write Goodbye Letters, has arrived at a propitious moment. The world is going through a terrible pandemic causing sickness and death across wide populations, requiring officials to impose lockdowns, mask-wearing and isolation. No one anticipated this dreadful environment, least of all a well-known poet popular for her witty observations of daily life. This time, however, Patriarca’s new collection carries a somber tone, meditative and reflective, with several tributes honoring poet friends who have passed away.

Skillfully and succinctly the poems tell stories of sudden departures with an air of regret for what was left behind. The opening poem, “Die   So I Can Write About It”, ends with the lines we wander backwards/towards our sins  surveying/ find only the grief   guilt/ in all the hollow spaces. From there, Patriarca’s forthright style gives voice to the immigrant experiences of exclusion as a child in school or as a writer trying to be recognized as more than an “ethnic.” The tribute to Alda Merini, “It Was the Wrong Time”, includes the lines she was born    too soon/ to speak her voice   too soon/ to define her   space. But it goes on to say, no more rejection letters    mailed/ claiming a voice   too ethnic/ an immigrant life   irrelevant. On that point Gianna Patriarca herself has made such a contribution to cultural recognition that she was commissioned in 2017 by the Bloorcourt Business Improvement Association to write a poem that was then permanently displayed in brass letters on stone at the corner of Bloor and Westmoreland Streets in Toronto. The title is “We Remain.” Surely this is as significant as the statue of Al Purdy in Queen’s Park.

Patriarca uses her Italian language roots with special tenderness in the section of the book devoted to her close relationship with her mother. There is a distinction between the Italian used in the translations of her other works and the village dialect of her household in “Dentr a stá cucina /Inside this Kitchen” and “Stamattina /This Morning.” She writes that the dialect was an old language/ perfect for prayers she whispered/ songs she sang.  it lived between us/like the child we both loved. “Ten Days in January” relays the heartbreaking journey of a devoted daughter beside her beloved mother in her final days. but her mind is clear/ her heart resilient, she writes, then uses the metaphor of her mother’s gardening to show the strength but also the difference between them. This series of poems will certainly resonate with readers who have shared the final days of a loved one.

Death is presented in other ways throughout the collection. The mother’s passing and the other farewells are the mature realities of human life. The stories of the suicides are more unsettling but reality nonetheless. In these days of the Corona virus pandemic, the strong and steady words of a familiar poet serve us well.

To the Men Who Write Goodbye Letters by Gianna Patriarca (Inanna Publications, 2020)

Caroline Morgan came from suburban Philadelphia, PA to the University of Toronto to study English Language and Literature. One of her teachers was Marshall McLuhan. She met Alberto Di Giovanni when she took Italian courses, including Dante and Petrarch. They married, stayed in Toronto, raised their family, and contributed to the social fabric of the city. Caroline edited 4 anthologies of Italian Canadian poetry and prose, and has published 2 books of poetry… Looking at Renaissance Paintings and Other Poems (2008) and Second Collection (2012). Her poems have been included in several anthologies, magazines, and online.

Gianna Patriarca is an award-winning author of eight books of poetry, one children’s book, and a collection of short stories inspired by the lives of Italian Canadian women, All My Fallen Angelas (2016). Her writing is extensively anthologized and appears on the course list of universities in Italy, Canada, and the USA. Her work has also writing been adapted for the Canadian stage, CBC radio drama, and appears in many documentary films. Her first book, Italian Women and Other Tragedies, is in its fourth printing and has been translated into Italian. She lives in Toronto and is currently working on a novel.