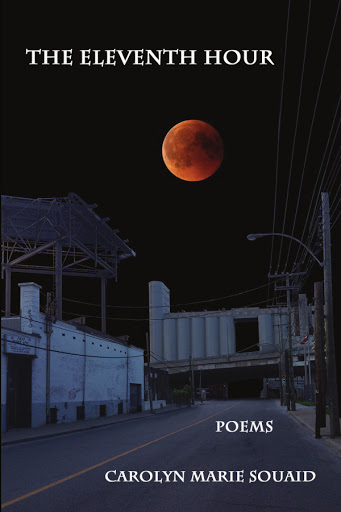 My grandmother’s got two vertical freezers so full of food, it’s her house I’m running to when the four horsemen of the apocalypse descend. Nothing she does is accidental. If she makes a hundred eggrolls, she knows exactly how many she’s giving away, and how many she’s freezing—I usually get eight. She doesn’t waste ingredients. I’m convinced she could do it all blindfolded. Carolyn Marie Souaid’s poetry is like that: no surplus, admirably restrained, and with a delivery that’s as precise as it is sustaining.

I first encountered Souaid’s writing in her novel Yasmeen Haddad Loves Joanasi Maqaittik, which tells the story of a Montreal schoolteacher who accepts a job in an Inuit settlement of Northern Quebec. I remember thinking that Souaid’s descriptions of the fictional Northern setting could only be those of a poet.

The Eleventh Hour, Souaid’s eight poetry collection, reads like a study of time: past, present, and future; or, I could say, like a study of moments in time. However, the work does not reach for grand, universal, everlasting truths or anything presumptuous like that. No. Instead, the poems carry their own small, intimate truths. Here is an example of such a small, intimate truth from the poem “Still Life With Slippers”:

We are happy, in general. We’ve outlived

our stove and several smartphones.

Souaid’s work recognizes the precarity of these bizarre twenty-first century circumstances we’ve inherited, and of those we’re responsible for. Her poems acknowledge that the world we live is at a “global tipping point.” Yet, even when it communicates the weight of that knowledge, the work never reads as panicked or accusatory or fatalistic. Instead, it reads as hopeful … grateful, even! In one poem entitled “Their Death Projects,” a (presumably) terminal character “chose to embrace / what had ruined him,” and is, in the poem’s last line, compared to “the Great poets who made art of their undoing.” Souaid’s effortless wisdom affects no derivative armchair platitudes or any of that learn-to-dance-in-the storm-crap. It is new, to wit:

… flamenco dancer in the final performance

of her career. Disregard her sweaty bow

as the curtain falls,

the dressing room where she sits at the mirror

Her rush to catch the last bus.

Ignore the scotch she pours

as she tallies up her personal regrets.

Remember, instead, her Spanish dress

igniting the stage, her racing heart,

orbiting the nucleus of time.

Re-read that second stanza: it’s a mantra—one they ought to print on t-shirts! I’d wear it.

The collection’s epigraph by Virginia Woolf aptly frames the work: “Instead there were little daily miracles, illuminations, / matches struck unexpectedly in the dark.” Souaid is not proposing that we learn to dance in the storm, that would be too easy. Instead, at this eleventh hour, she invites us to reflect upon how we got to where we are. And not in a catastrophic, apocalyptic sense, but by thinking on the assortment of our own small, intimate truths—our own “little daily miracles.”

In the poem “Timeline,” a devoted father represses his artistic impulses to provide a full life for his family. We meet him in his old age, as he is slowly making his way up the steps of a retirement home:

… plastic bag with his sketchbook and a sandwich

Sure, the hour is late—but it’s not too late. It never will be.

CAROLYN MARIE SOUAID is the author of seven previous poetry books and the acclaimed novel, Yasmeen Haddad Loves Joanasi Maqaittik (2017). She has performed at festivals and literary events in Canada and abroad, and her work has been featured on CBC-Radio and in a variety of national and international publications. Carolyn has been guest faculty in creative writing at Bishop’s University, and has taught for the Quebec Writers’ Federation. She lives in Montreal, where she counsels Inuit students attending John Abbott College.

JOSH QUIRION is a French-Canadian writer from the Eastern Townships of Quebec, Canada. He holds an M.A. in English Literature and Creative Writing from Concordia University, and is the co-founder/editor-in-chief of the Montreal-based cultural publication, yolk. Quirion published his debut collection, Towners & Other Stories, with Shoreline Press in 2020. His writing has appeared or is forthcoming in The Mitre and Prairie Fire, among others. He currently writes and resides in Montreal.