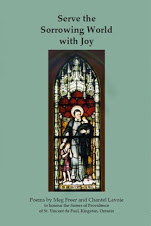 This lovely short book by Kingston authors Meg Freer and Chantel Lavoie was written to honour an order of nuns who have been carrying out community service in their city since 1861. The Sisters of Providence of St. Vincent de Paul are presented as “spiritual warriors” (10) who are social justice activists. They are seen in their full complexity as “lightning rods / for God’s grandeur— / grounded, otherworldly, / veiled and keenly tuned / to the world beyond the veil.” (22).

Each author wrote roughly half of the book’s poems, and these individual pieces weave together seamlessly to reveal the women behind the wimples, the work they conducted, both quotidian and religious, and their social activism. Freer mainly focuses in on fine detail, as in her poem about the sisters’ printing press where “every block of type [is] a moment” (10), and her evocations of schoolyards and chapels. By contrast, Lavoie’s poems tend to range more widely through time and distance, although she also brings crisp attention to details.

The notion of “service” is key to the book. It appears in the title and in several poems, including one that refers to the intriguing directive by St. Vincent de Paul, the saint to whom the order is dedicated, to ask forgiveness from “the broken … for helping them.” (5). This sense of humility in serving community is threaded through poems about the nuns’ work as teachers, health care workers and caregivers, about finding grace among the frustrations of red tape as they provide support to businesses, and about commitment to social causes despite exhortations to “Stay in your lane, Sisters” (25).

The poems are often descriptive or narrative, but there is lyricism and beautifully heightened language throughout. Virgin Mary is viewed by aspiring nuns as “the rock star— / the girl who said yes / to angelic hosts, to host a guest, blessed.” (7); a hushed moment where “[s]unlight through stained glass colours the gold cloth / on the tabernacle red. Words cling to silence” comes to life (31).

Archival photos are interspersed through the book and accompany many of the poems. They include such delightful images as a trio of nuns in a rowboat, along with several of nuns at work: with microscopes, safeguarding heritage seeds, or in kitchens, where they are “artisans of flour and water / in the Altar Bread Department” (15). We read about and see pictures of nuns arriving in Central America and the service work they carried out there. Activist nuns with placards are shown in both words and images at demonstrations against the closing of the Kingston Penitentiary prison farms, and at what the cover copy tells us were 20 years of silent vigils at City Hall.

The book includes poems about the work of the order from its early days to the recent handing over of their mother house to a collaborative community partnership that has pledged to carry on the nuns’ social justice work. These threads run parallel to poems that describe the lives of the women who choose or “were called in adolescence” (7) to this life of service, portraying novices alongside older women whose “virgin lips grow puckered / with time and pursing, to lick / a frugal thread, to thread a needle.” (9) and elderly nuns during 2020’s pandemic quarantine “lingering at the edge of light… [t]his time, no young among them” (33.)

The final few poems in the book reveal how, despite this decline in membership and the aging of those who remain, the order’s long legacy of community service remains strong. The Sisters of Providence ceremonially demonstrate their trust that transferring their land and property in aid of the community initiative known as Providence Village will “stitch a new / landscape onto a design woven long ago.” (37).

All proceeds from the sale of Serve the Sorrowing World with Joy will go to the Sisters of Providence of St. Vincent de Paul to help further this work of service.

Meg Freer grew up in Montana, went on to study musicology, and worked first in book publishing. She now lives with her family in Kingston, Ontario, where she teaches piano. Her photos, poems and prose have appeared in many journals, including Ruminate, Vallum Contemporary Poetry, Arc Poetry, Juniper, and Eastern Iowa Review. Her poetry has won several awards in the U.S. and Canada.

Chantel Lavoie, originally from Saskatchewan, first encountered the Sisters of Providence in 1988 when she spent a year working with them in Guatemala. She now lives in Kingston, Ontario with her two sons and her husband. She teaches literature and culture at the Royal Military College of Canada. She has published two collections of verse, Where the Terror Lies (2012) and This is about Angels, Women, and Men (2020).

Frances Boyle is the author of two poetry books, most recently This White Nest (2019), along with two works of fiction: a short story collection and a novella. She lives in Ottawa, and writes reviews for Canthius feminism and literary arts and for Arc Poetry Magazine. www.francesboyle.com