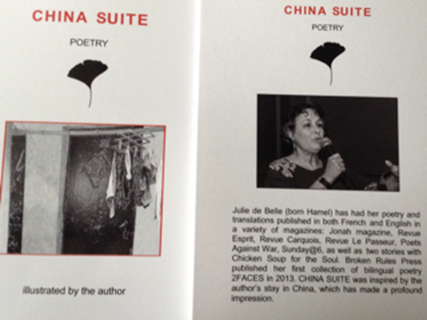 Here is a little book I read with a haiku mind.  A haiga mind, really, as the pages are accompanied liberally with photos by the author, of her near-year in China teaching English.  Stationed in Jiaxing,

The longer poems at the beginning of the book are signature de Belle:  sound rounds, moralistic, observant and wry.  In the second half, there are several whose verses s’enchaînent like linked haiku.  A poem in the middle of the book, paired with a gingko leaf silhouette, refers to short form:

A child cradles a leaf in her hand

A tiny triangular canvas for miniature

With that, haiku mind locks in, and the last lines of the next poem read that way:

Because all other gifts are made in China

And so from poem to poem:

China marches on in droves

She is a china doll

I personally don’t get the point of the capitalizations.  It shows a difference between long poetry and short – in the short poem every choice is a choice, has a reason: each word, each line break, each punctuation, capital letter, italic.  Most haiku poets in North America are parsimonious about using these because excess says something in itself.

My favorite poem, the one that prompted this review, is “Storytelling”.  Each verse begins:  “I tell her,” and proceeds into a short short story.  Some examples with adjusted line-breaks and a couple of suppressed words:

made from donkey skin

cooked and eaten on the spot

the parks on Sundays

and daily feasts among friends

tables as big as the sun

The book is a study of a tourist’s, an expat’s, experience of China: the cultural observations, the grey areas of appropriation, both within a culture striving for social unity appropriating its own people to its purpose, and between cultures judging and learning from each other.

So what is the point of reading poems through the lens of an Asian form they do not pretend to mimic?  I find the exercise of looking at long poetry as linked haiku to be instructive both as a long poet and as a writer of tanka.  Blending forms, just as a teacher of English in China is blending forms and bending her own form to adapt, is fun and instructive. There’s just enough hint of China in these poems to waft a sniff of old poetry.