Originally published by The New Quarterly 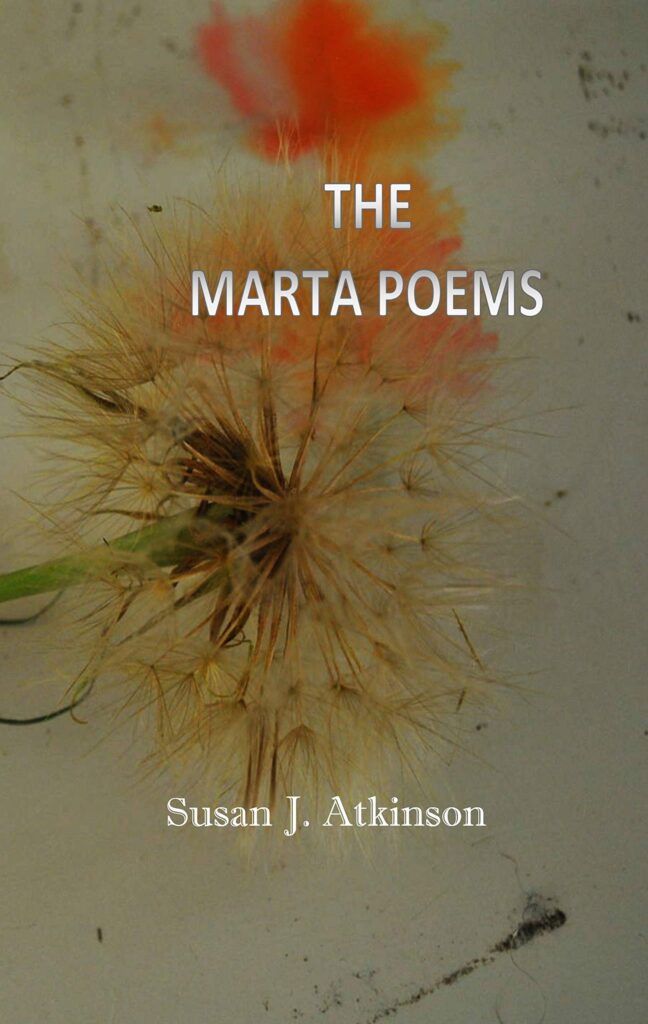 As a poetry editor for The New Quarterly, I first encountered Susan J. Atkinson’s work when reviewing forty applications for an Ontario Arts Council grant about two years ago. Among the poems carefully excerpted from in-progress manuscripts by writers both emerging and well established, her selection stood out—a unanimous choice by our four-person poetry editorial group. Her progress description made it clear that she had been working on the poems for some time; the finished product makes it seem as if she has been doing so for most of her adult life. The book is—forgive me for lapsing into blurb-speak—a compelling and assured work, unified not only by its credibly depicted poetic protagonist but also by a variety of motifs—recurring and sometimes sadly ironic images, allusions and actions. The overall effect is novelistic or, even more aptly, cinematic (perhaps it is not surprising that the author was involved film production for over a decade).

Marta is a displaced person, a DP, an acronym which, as my mother gravely informed me decades ago, was often used derogatively in Canada to refer to thousands of refugees relocated to various countries after their forced uprooting, imprisonment and enslavement during WWII. Marta is multiply displaced, and the book follows her relocation from Poland via cattle car to Siberia and then after a year of involuntary labour, the journey to Rhodesia, England and, finally Canada, only the last of these relocations being a matter of choice.

Allusions to nursery rhymes and fairy tales—Snow White, Rapunzel, Hansel and Gretel—abound in the poems about Marta’s childhood in Poland, and her life as a young girl does contain traditional storybook elements. Her mother dies in childbirth, and she is raised by a stepmother who, if not notoriously wicked, cares so little for Marta that she ships her off to relatives in the country much too shortly after the death of her father from an illness contracted as a coal miner.  A double irony is at work in his earlier reference to his daughter as Thursday’s child, for she has very far to go but her subsequent life symbolically suggests a more appropriate birth as Wednesday’s child, whose life is full of woe. Despite the comfort and kindness she experiences in her “little cottage in the woods,” Marta is still saddened by her father’s death and undeservedly burdened by guilt over her mother’s. Living “with a family that treat her/like a princess, Marta is wary of apples/especially the red ones.” These allusions are far less frequent in the rest of the book as fairy tale unpleasantness gives way to an evil that is anything but make believe, only to resurface near the end of the book (and also close to her death) in “On Sleeping,” when Marta dreams about a sinister dark-cloaked figure selling apples from a cart: ”Marta wants one. She wants a bite, a bite for her child/a magic bite to stir the girl who held her breath until/ the man in the white overcoat said she was dead.”

But any happiness in Marta’s life is, to use Alice Munro’s words, “like a bubble that’s about to break.” The coming darkness is foreshadowed in the last poem of the first section, ,”Her Name—June 1940,” in which she innocently “practices writing her name/plays at adding an h.” This scene is reminiscent of another more famous fictional orphan, Anne of Green Gables, who famously explains the greater distinction afforded by the final e. Of course, the added letter here takes on a much more sinister significance in the final phrase, “in case it is needed.

The “little cottage in the woods’ burns down and, shortly thereafter, she and her loving step-parents are shipped to Siberia by truck and train, “cooped with others/in cattle cars.” “Trapped in closeness, others kneecaps like sharp sticks/poking her thighs,” Marta endures weeks of starvation and thirst, finally arriving at a farm in Siberia, where she is immediately put to work pulling thistles in a wheat field, her hands “blistered and bleeding, prickles digging under her skin.” Surviving a year on minimal food and water, suffering from dysentery and pneumonia, Marta is fortunate to be among a group of Poles sent to Abercorn Camp in Rhodesia. Amid the relative comfort and security, Marta experiences what may be the only true love of her life, “a man with sweet cinnamon skin,” becoming for the first time “both a lover and a beloved.” Racial, social, and political realities make a more permanent relationship impossible, and Marta must abandon her lover and travel to England, where she meets and marries, more out of sympathy and convenience, a soldier still traumatized by the recently ended war. Expecting their first child, Marta and John enjoy a brief period of contentment during her pregnancy and birth of their only child, Irena. This section contains two of the most wonderful poems, one blissfully happy, the other unbearably sad. In “Her Sunlight,” Marta

watches Irena plant her foot  in a pool of sunshine

the child is mesmerized by the falling petals of light
bends to smell them, touch them, pick them

.…she crawls along the floor

sinks so close to the ground, face pressed body curled
around the buttery yellow splashes, a comma at the end

of an unfinished poem,

But such moments prove ephemeral, as we might have expected by the irony suggested by the name “Irena,” derived from the Greek word meaning “peace,”a  state destined for only a few brief stays in Marta’s life. In “Lullaby,” we learn of her daughter’s quiet, heart-breaking death. Holding the child in her arms,

But there is nothing. The room is still is so still Marta catches
her own breath to stop the pounding of her heart.

Marta’s desolation is vividly imagined in “Changing the Clocks,” where she refuses to set back her clocks and “make one more hour of darkness/instead she lives in limbo.” In “Stains Have Memories,” Marta comes to regret her earlier efforts to clean her daughter’s room “so many times/it can’t be possible/for a stain to remain/ to remember all the things/she wishes it could”—but eventually finds that she can’t  “forgive herself for/ scrubbing away/ the stain/the feel/the smell.”

Atkinson never deals directly with Marta’s death. Instead, she offers a final poignant poem in her own voice, “After Life,” in which she finds herself standing on the curb watching the rain destroy the leftovers of Marta’s now emptied house: boxes of letters, photographs,  and other papers now turning slowly to mush on the curb before the garbage truck carries it to landfill oblivion. Whoever cleaned out her house “didn’t care about the weather/ or what was in those boxes reeking of age and sickness,”  “cardboard coffins I had always wanted to glimpse,” now guzzling the October rain.” The poet retrieves what she can, carrying “envelope on envelope” to her basement… a thousand drowned moths sopping wet and tissue-thin/aching to survive.”

Much to her credit, Atkinson manages to balance the strong sentiment generated by her poems with a high degree of poetic craft. Apart from the fairy-tale motifs mentioned earlier, she uses a host of repeated images, a notable example being  on handkerchiefs and napkins, some folded for the delight of children, others fashioned from Marta’s rapidly shortening slip to make money on her way to Siberia, or still others compressed into ever smaller tear-soaked squares and hidden in a drawer as a way to end her constant weeping..

Bread or bread crumbs take on more than a fairy tale significance in many poems, in incidents like the moldy bread thrown on the floor of the cattle car, fallen upon by the occupants  “like hens pecking at corn” ; the feeding of ducks in a London park (a clearly ironic parallel); and, toward the end of the collection, in a poem titled “Resolutions,” another of Marta’s responses to Irena’s death, when she sits at the breakfast table and

sculpts crumbs into the scarred wood
By 10, a little girl moulded
From the bread smiles at her,
Small heart beating

The most prominently repeated activity in the book is Marta’s sewing, which becomes a metaphor for her endurance and survival. Learning the skill as a child, she sews in guilt over her mother’s death; she sews to make money in Siberia, Rhodesia, and Canada; she makes dresses out of only the darkest material in which “to wrap her sadness”; she fashions a quilt incorporating long-kept scraps of paper and cloth, eventually wrapping it up and hiding it under the bed as a way of coming to terms with the memories these scraps evoke.

What also speaks to the poet’s craft are the many poetic forms and figures of speech used throughout the book—effectively alliterative and assonant phases, italicized testimony in Marta’s voice, ghazal-like couplets, poem suites, and anaphora, the latter used in “All the Small Arguments,” where the repeated phrase “she kept them” introduces items in a list of marital grievances and repressions which Marta metaphorically seals up “in a small brown leather satchel/that had a broken clasp.” There is even what I take to be a concrete poem, “The Quiet Years,” which describes her quilt- making efforts somewhere toward the end of her life—a poem arranged on the page to resemble the patches gathered together in a bedspread.

In an on-line video from a reading given at Ottawa’s ling-standing Tree Reading  Series (2017?),  Atkinson mentions writing a collection based on “a little old lady who lived on her street” and explains that she wants to tell us a little “ about the small and the ordinary.” On the basis of these poems, I’d say that there is nothing small or ordinary about Marta or the poems themselves.