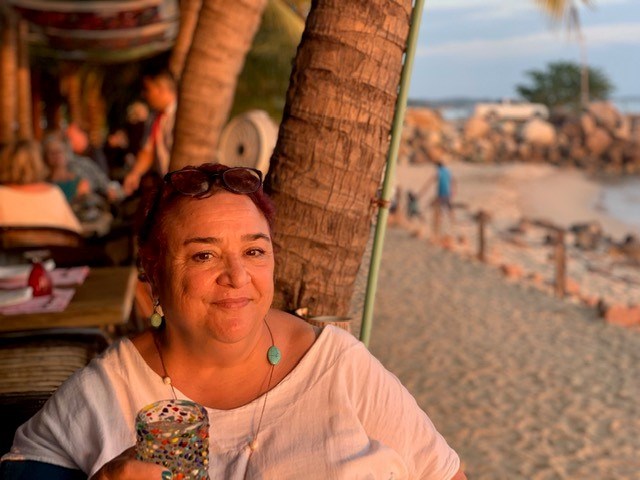 Rarer still are friends like Luciana Ricciutelli, Editor-in-Chief of Inanna Publications, who was all of these things, and more. To me and to many, as so many who knew her loved her like family from the start. Friends like Lu who knew me before I could write, or tie my own shoes. In rooms that always seem sunlit, even in stormy weather. Who weathered too many storms for one life, but also served as a lighthouse for countless Canadian authors as well as editors. Who was a fierce editor who read your work and took it to heart, the only way she knew how. And kept it there.

Luciana lived for women’s writing; both Inanna and the journal Canadian Women’s Studies / Les cahiers de la femme were both central to her life’s work. But if you’ve had the blessing of knowing Lu outside the publishing realm—of having received one of her safe, all-encompassing hugs, or eaten one of her extraordinary meals, or simply being in the presence of her light—then you may very well imagine how the loss of someone that rare is a loss like no other.

When I heard about Luciana’s fast decline, I felt myself thrown out to space, floating in and out of various registers of grief and disbelief. Then when faced with trying to imagine a world without her, I began to pray for Tino and the family, Stefano and Claudia. But prayer, too, became a difficult endeavor. Language had mostly served me as a glowing vessel, waiting to be filled with words, with meaning. But how do you write about emptiness? The vessel that fills only with inconsonant words, if even words; muffled, incredulous sounds. As though a prayer in the mouth of one who does not believe.

And still, I can scarcely believe she will no longer be, let alone believe in these words as testament to her having been. Incongruent, too, trying to write about someone who was so life-affirming, so full of living—anima—in/as memory. And then the familiar shapelessness of shock that comes in, first, as a distinct wave that sets forth a smaller collection of crests, which dissipate amongst the hours we fill with the various modes of tending to and caring for, working on and surviving through. There is the attempt to continue, as usual, despite the tectonic shift in which even the linearity of days isn’t promised.

Still, you must try and navigate the new landscape. “I want to write a novel about Silence,” says Teret, a character from Virginia Woolf’s first novel, The Voyage Out. “The things people don’t say.” Woolf knew how to paint the scenery of lives who face (or will come to face) the emotional vicissitudes of loss. Of self, of others. But it mustn’t have been an easy practice or task for Virginia. Nor for Luciana, whose years of dedication to literature was her way of saying to her authors—I hear you, even what you don’t say. Go on and speak your truth. To carry on that echo is to know that writing and bringing justice to a suffering have something in common; they both “deal” in silence. And to be an activist, as Luciana has been her entire life, is to work on behalf of voices yet to surface. Luciana was also a Woolfian scholar. And Woolf, like Lu, was lost too soon.

Not even the author’s own ability to delve into the psychology of things could deliver her from the shadows of her inner world. But Woolf gave coherence to the brutalities of life in a way that seemed to say, the pain is the truth.

Lu, losing you is painful and that is the truth. But say I am learning that being a strong editor means being invested in the delicate work of bringing a text closer to its truth. To the author’s truth. The truth is, writing is a struggle. But say the struggle itself is the source—the sand in the shell, the clearing after the storm, the abject beauty of broken, refractive light. Say metaphor—loved by multitudes of poets, if not all—is supposed to help us imagine new worlds. Say I refuse to imagine a new world without Lu. Sorry, Lu. Say I will spend the rest of my life trying to write about this loss, however irresolute the words show up. Say, even, that the grief returns in bigger waves; say I still show up.

Lu, let’s say this is a thank you for believing in the power of words. For being the best editor in the world. For believing in my words, which has meant quite literally the world to me. Say my discomfort is evidence I’m doing something right. Say I know you can hear me, Lu, even when I do not say a word. I love you, Lu, and I will say it again and again.