We know right away after reading the first poem of In the Shadow of Vimy that the book is not going to be a paean to war.

Despite its innocuous title – ‘Picking up Pies at St. John’s Anglican’ – the poem plunges the reader into the poet’s main theme: war and its consequences. “…far off colonies of conquest, hope, and white lies. A century has passed since this no man’s land of madness, and the grief of thousands of Ophelias…” “The feral laws of capital were questioned…” but “…the carbon god reborn with super villain status he comes to terraform the planet with production models perfected in the mess tents of the Marne.” Whew! War and its consequences: the exploitation of workers (soldiers) and the Earth for profit.

Donovan explores this theme further (and in many of the poems) in ‘Mining on the Western Front’ as workers go from the Sydney mines to serve in the First World War, and today’s maritimers go out west to work in the oilpatch. “Caught in the debris of this military orbit we have become a gas station hawking our tar (in service of the Middle Kingdom) to the highest bidders.” Double whew! Canada caught between the U.S.A. and China.

And, as the in memoriam poems pile up (to individuals from Donovan’s extended family who served in two world wars, or, in the case of the women, mostly stayed home and kept things going), the ‘shadow’ of the Vimy monument is explained as the veterans go about their lives and the rest of us try to understand. 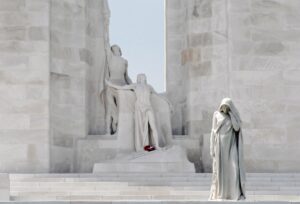 I had to look up images of the Vimy memorial to round out my knowledge of it and I’m glad I did. Otherwise, I wouldn’t have discovered that the small (comparatively) hunched hooded stone angel off to one side, its back to the main piece – the two upturned arms (or is it a broken gate?) – is called ‘Canada Bereft.’ Two words you don’t often read so juxtaposed.

Donovan’s are dense poems, packed with information: history, geography, and the mysteries of human nature.

Read slowly, the poems’ rhythms reveal themselves, grinding inexorably like glaciers. (This is why I have chosen to quote from the poems without offering line breaks.) And the tone of the poet is mostly heavy, growling to this ear.

Because Donovan is of Irish and Scottish blood, (I hope I got that right) he’s interested in both cultures and how they overlap in Northern Ireland. This identity and how emigration and immigration change identity are explored in many of the poems.

Belfast politics appear in ‘Lough Swilly’, which is translated lake of shadows. Shadows again. In ‘Home Thoughts’, about the historical eviction of the Irish, we are cautioned to remember these events not just as memorials to suffering, but because they are still occurring to other peoples.

Donovan softens his tone in the lovely light lyric of ‘In Memory of Seamus Heaney’ which contains the simple repeated line “The day of his death was a warm Irish day.” Donovan offers us two images with which to say farewell to the dead poet. One: “a long-boat to take him in the wake of Colm Cille to Islay” to leave him at one of the headquarters of the ancient Kingdom of the Western Isles when the culture was coast-centric. (Colm Cille is St. Columba, an early Christian missionary.) And two: to put Heaney in Derry, right at the heart of the ‘troubles’ “in Badger’s below the wall, nursing a pint before last call.”

I appreciated Donovan’s poems about women. ‘Vancouver Lights c. 1941’ gives us a woman relieved by war of a terrible husband. “God Save the King for ending our private little war.” she muses as he leaves for the conflict. And in the same poem, more generally, “…the world was as it ought to be. So many women having to run the show.”

He devotes several poems to chronicling the life of Molly Lamb Bobak (1930-2014), Canada’s first female war artist, whose war diary, laid-out in the form of a newspaper with illustrations, has been digitized and is available at the Library and Archives Canada website. Such lines as “I’m painting a still life in Petawawa hoping to improve my pay.” in her voice, bring the artist’s experience to life.

Associative language is used to good effect in the poems. From ‘Living out the end times on Cape Breton Island’ we get “Last year an undertow breached the breakwater like a teenage Brian Wilson and surfed all the way up the harbour, Mini Tsunami, a Fukashima understudy”. And strong language. From ‘Goodbye Fort MacMurray, Goodbye’ we get “How did we end up ugly Canadians, it’s not as if we were mining execs” and “How did we learn to love asbestos?” and, towards the end of the poem “How free are Chernobyl lichen Caribou?”

Strong also these words from ‘Come From Away’, one of the more lyric poems in the collection, about a woman who emigrates from the USA in the 1960s, expecting more freedom of expression, of thought, and meets up with rural maritimers “…like Calvin’s saints, poor, pragmatic, Gothic, hunkered down here in hills of bigotry as familiar as the South.” (This poem contains one of my favourite lines from the book: “the quiet tick of fireflies under the still hunter’s moon.”)

In ‘History Lessons’ we learn some in the poet’s family are for and some against the monarchy. Thus we find a photo of the Queen, brought home when the local Legion closes, hanging in the basement under an old Montreal Canadiens hockey calendar from 1972. Humour. Deadpan, but humour nevertheless.

As well as the history and geography and politics in Donovan’s poetry, individual poems contain instances of strong emotion.

In ‘Ingonish Island, September 2001’ two men in a boat aren’t just fishing; they’re sharing a lifetime of spoken and unspoken feelings. “…the deep sea beckons and either way he’s for it” may be about the cod the poet’s friend has just unhooked and tossed back, but is it? “What wish would my friend make if he could wind back time?” “Drifting now, we rock in the tribal current of memory,”. “…a friend adrift whose voice cracks slightly begging pardon.”

We sense these two guys are old or older. But the bonding in Donovan’s poems is often inter-generational as when the family view the sinking of the battlecruiser HMS Hood by the Bismarck (1941) in ‘Sydney-Glace Bay Drive-in’. Of the 1418 men aboard, 3 survived.

Singing and laughing on the way to the show (in the early 1960s I estimate), some of the kids hide in the back of the car so they can (again, I surmise) pay a lesser entrance fee. They eat popcorn as the ship explodes “in a blinding flash that could have been anything, really.” The father, a veteran of the Second World War, says one word “magazine.” And we’re left to imagine his feelings.

The grimmest bonding occurs in ‘Watching War Horse With Caleb’ when the poet takes his grandson to see the movie version, the two of them having loved reading the book together and been entranced by the “delicate, transparent beasts of wood and canvas and care” as realized by the stage production and seen by them in ads and on You Tube. But at the movie “Caleb cried amid a chorus of traumatized children, “They’re shooting the horses!” Guilty fathers and

grandfathers we shivered in our air-conditioned seats, watching the young and old fall face first into fresh clay quickly turning to mud.”

In ‘The Battle of Beaumont Hammel’, a First World War battle which took the lives of 732 out of 800 Newfoundland soldiers, we read “Sons in fetal positions, calling and keening in a corner of no child’s land, embracing crater walls as seal barks echo in cliff-wash for lost cousins on clampers and ice bergs off Bonaventure Bay.” And at the end of the poem: “…the folly of the fight for empire. And so we remember them now, only, and always, with love.”

In the Shadow of Vimy: Poems, New and Selected, Stewart Donovan, The Nashwaak Press, 2021

Louise Carson has published eleven books, two in 2020: Dog Poems, Aeolus House, and her latest mystery The Cat Possessed, Signature Editions. Her previous poetry collection A Clearing was published by Signature in 2015, and she’s twice been selected for inclusion in Best Canadian Poetry – in 2013 and 2021. Louise also writes historical fiction. One such novel, In Which, Broken Rules Press, 2018, was shortlisted for a Quebec Writers’ Federation prize and a ReLit award. With her daughter and pets, Louise lives in the countryside outside Montreal. 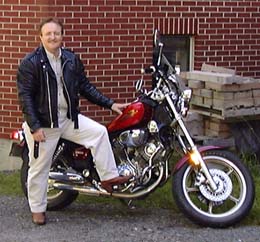 Professor, poet, novelist, and motorcycle enthusiast, Stewart Donovan has been a prolific source of Atlantic Canadian literature during his adult life.  Donovan was born in Cape Breton, Nova Scotia, and lived there throughout his childhood. His family’s Irish roots heavily influenced his choice of study, and he eventually pursued a Ph.D. in Anglo-Irish Literature and Drama at the University College Dublin. Ireland is one of Donovan’s greatest inspirations for academic pursuits, journal articles, and notably, poetry. His first book of published poems, Cape Breton Quarry (Wreck Cove, 1990), is a collection about the childhood wonder of growing up in the Maritimes and the socio-political and economic history of the region. Donovan’s contribution to poetry has not only been through his writing.  In 1994 he founded the Nashwaak Review, presently serving as Editor. Donovan grew the literary Magazine to become a recognized publication for original Canadian poetry, essays, and reviews. Many of Donovan’s articles on poetry and Irish writing have been published in regional journals such as The Antigonish Review, and in national journals such as The Journal of Canadian Poetry. Stewart Donovan lives in Fredericton, New Brunswick, where he teaches at St. Thomas University in both the Irish Studies Department, which he helped develop, and the English Department.