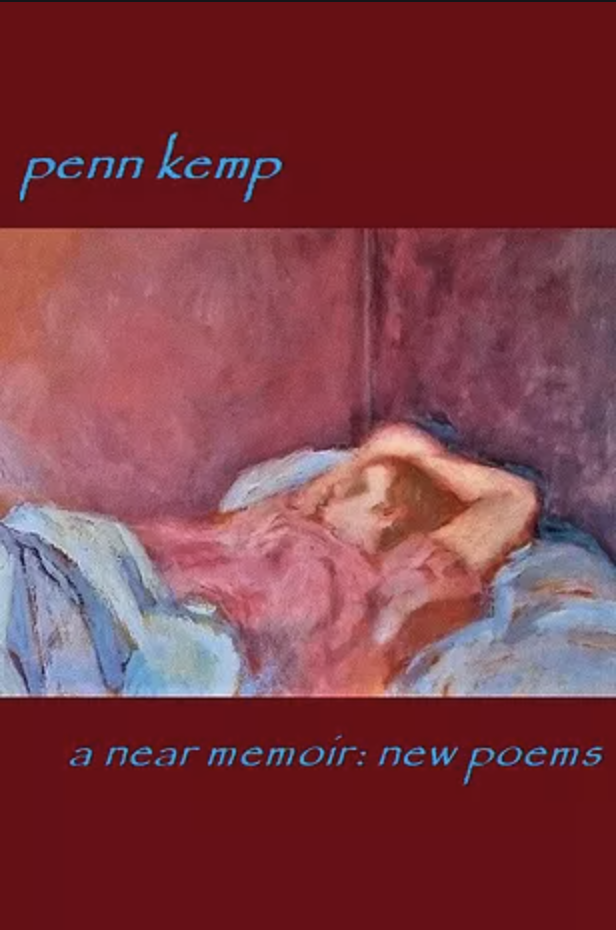 A Near Memoir: New Poems, Penn Kemp’s elegant chapbook, features her father’s portrait of her at 14 on the cover. Photos and art invite the reader into family dynamics. Fitting for a memoir, Kemp’s poetry expands Heidegger’s perception that “nearness slows the future’s approach, creating room for a present to develop out of the past: all three, together, in relationship, are what is known as time.” Kemp’s formative and familial poems compress time into a warm embrace. The closing poem, “Choose to Challenge (2)” reaches outward to inspire the reader: What calls / you to be the best you can be? What / calls you to act for the sake of all beings?”

Kemp’s incisive prioritizing of many decades of poetry and activism is breathtaking. Her opening poem, “To Carry the Heart of Community Home” plays on Heidegger’s theme: “The through line leads on. Art / plays itself out as prayer […] what ancestry.ca / does not reveal.” The poet’s customary word play, humour, deft imagery, keen perception and uniting philosophy are vividly present. Her inability to carry on her mother’s skating skill is adroitly summed up in her poem “Shoot the Duck” where that trick of sitting on the skates with one leg darting out is “like the barrel of a gun.”

That metaphor alludes to the theme of family warrior history. The poem “Circling the Gulf: A Gain A Loss Ingrained” after eloquently describing her son’s suffering, closes with the plea: “Our work is to stop / the war in art and life so that children don’t continue to enact conflict.” Another war poem: “The Stand of Oak” memorably chronicles a veteran taking acorns from Vimy Ridge to grow a stand of oaks: “Thriving, they will return life to Vimy Ridge.”

Another poem about Kemp’s formation, “A Convoluted Etymology of the Course Not Taken”

plays on Robert Frost’s poem “The Road Not Taken.” It reveals Kemp’s switch from Biology, Latin and Linnaeus to Latin and Languages, because seniors have to dissect a pigeon. It heartily ends: “and kept / my birdfeeders full,” foreshadowing her commitment to poetry and ecology.

Sacredly feminist, her poem “Invocation,” places the 14 female engineering students massacred in Montreal as proxies for all the missing and murdered women, addressing their souls: “As / if you have life beyond what we recall, remember / before this dark December claims its own again.” Kemp’s weave reveals what Shulamith Firestone and Anne Koedt publicized: the personal is political.

Throughout this significant chapbook, A Near Memoir: New Poems, Kemp braids personal and historical lessons and family legacies into an SOS not to repeat history’s mishaps and mayhem, but to harmonize with all beings, starting from within. The opening poem “To Carry the Heart of Community Home” embodies Heidegger’s observation, showing us: “How can the past ever be through / with you? How can the future not / know who we are, who we become?” The use of the pronouns: you, we, underscore Kemp’s inclusive and generous heart. This multi-genre book is a wake-up call for saving ourselves and our home. The closing poem, “Choose to Challenge (2)” was commissioned by the one Canadian all-women institute of higher learning, Brescia University, to celebrate International Women’s Day; Kemp read it on YouTube with her gentle humour, impassioned plea, and abundant wisdom. Her photo of a passion flower aptly symbolizes Kemp’s approach to life.