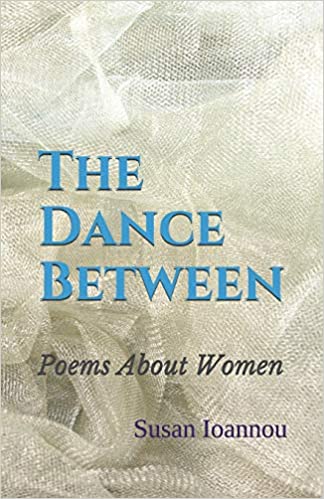 The Dance Between: Poems About Women

The Dance Between is a suite of spare and striking poems about women, in various stages of life’s rhythms. Susan Ioannou’s epigram speaks of the moment between “what you once were, / and what you are now becoming” as being that dance. The poems span women’s lives, past and present, following common threads that are both personal and universal.

The three sections group poems according to women in history and in the poets’ personal history. In the first section, “Out Front”, Ioannou sketches many profiles of women artists who have influenced the narrator. Part 2, “The Fallen”, follows tragic narratives of women’s loss and loneliness. The third part, “The Stars Wait”, comprises poems about women’s rites of passage, epiphanies, and coming of age.

Many poems are collages of female figures, mosaics of memories, word portraits, and personal sketches. Poetic portraits range from landlord to sculptor, Latin dancer to war bride, babies to grandmas. Often sculpture is a metaphor—for women’s lives and bodies, sculpted by history, by others, by time and culture. “An acre of earth / or inside our heads / where do we wander, describe what is real?” There are portraits of domestic artistry, communing with nature, and making something out of nothing.

These poems reflect on how some things change and some are timeless in the lives of women. There is simplicity of image and setting; poems are spare and paint pictures with brushstrokes. “We look through illusion, / permit time’s brush its stroke.”

Often poems are seen through the artists’ perspective, and are shot through with light—light within people and in the memorable glints of brightness of place. “Between our words, warmth / hovers thick with light.”

There are tragic stories of survivors and war brides, of prejudice and powerful suppressive practices, with hints of tragedy and loss, yet balanced with tragedy and loss are poems of new beginnings: fledgling ballerinas and a golf lesson, first writing workshops and first connections, as well as resilience. Despite dark images, the narrator “uncurls poems towards the light.”

In the final section, women move towards empowerment and self-realization. In the end, each woman creates “a revised ending for herself.” Ioannou moves from specific to the general, from personal to the universal, from loss to learning. Like the mentioned cross-stitch samplers and quilts of the pioneer days, these poems weave images and samples of women in Canadian life. “Loneliness, she knows / can thicken drop by drop, / and choke the spirit down.” Domestic scenes are often warm, in contrast to nature scenes often fierce, struggling “to wed you with old earth.”

Often there is the undertone of longing and yearning, yet resilience and light shine through overall. The poet explores opposites, and not just the tension between them, but, as the title suggests, the lively dance between, “never to be known, and so, / unable to be forgotten.” This book is also available at amazon.ca.