Reviewed by By Louise Carson

The Hammer of Witches by Kelly Rose Pflug-Back, Dagger Editions, 2020 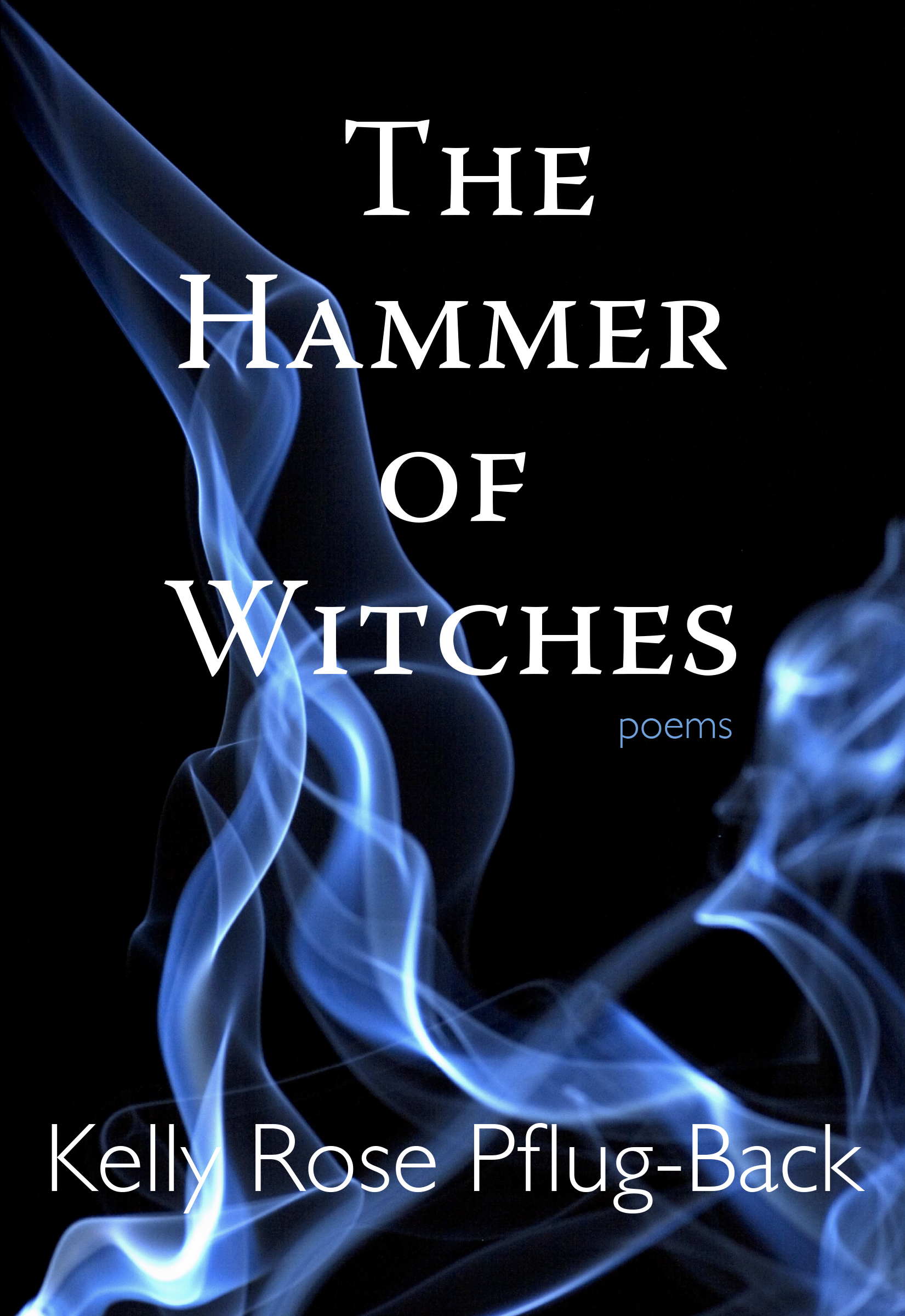 One of the things I liked about The Hammer of Witches was that it made me look stuff up. As in the title of the first poem – ‘Malleus Maleficarum’. MM is a treatise on witches, translation, The Hammer of Witches, and published in 1486. Its authors were two Dominican brothers, Heinrich Kramer and Johann Sprenger, who were charged by the pope to extirpate witchcraft in Germany.

So, on the face of it, the hammer of witches is the combined energy of the various instruments by which society, religion, dare I say, the patriarchy, attempts to ‘straighten’ out the more ‘bent’ members of said society. (The image of a blacksmith straightening a nail comes to mind. After all, what use is a crooked nail?)

And the thirty-two poems in this slender volume are full of the misery being marginal can bring. But do the marginal, the ‘witches’, swing their own hammer? Singly or collectively, do they have any power? It is this counterweight that I believe Pflug-Back has written about.

The poem ‘Malleus Maleficarum’ addresses the poet’s familiar. “Bride of nothing / bride of wind / and pouring rain”. And it conflates their past lives as executed witches with their present lives. “the two of us lost together / still // in this forest / of tall buildings.”

‘Miscarriage’ evokes just that. “those mangled pieces of you and I / and never will be.” Pflug-Back uses the word strange three times in this poem. “strange attars” “strange tampering” “life’s strange passage”. I concur with the premise that whenever the body goes through a brutal physical experience like a still birth, miscarriage, labour, abuse, chemotherapy, surgery, the psyche resonates from it as much as does the body. Afterwards, as some time passes, she soothes us with this passage:

and the department store Santas have closed their cotton wool eyes”

which is a lovely way to describe fall’s end and winter’s beginning.

This is followed by the touching, delicate memorial verse ‘For Dave’.

“You know, I don’t really get it either

I keep thinking to myself, Dave died

that must be hard for him

I should text him and see

if there’s anything he needs.”

And so it goes. Poems full of tortured, grotesque imagery. Poems clear and clean in their wistfulness. ‘Phantasmagoria’ is violent and cold. In ‘For T.’ scars are flowers and “I would give it all away / to see you turn to smoke in their hands // a gust of torn paper eaten to lace by flames / carried high above the razor wire’s clawed coils’.

In ‘Tarantelle’ (Another word I had to look up: a southern Italian folk dance, fast, and performed with tambourines.), “she” is life, the earth, death – take your pick.

“She wants me to forget my name

and press my cheek into her belly’s smooth altar.

and sow me in the ground like a seed,

my skull crowning from the dirt once the frost has thawed.”

“She wants to cover me, she says

in pollen and spit

dead leaves and the carapaces of insects

‘Vanishing Act’ is a conversation with a junkie who may be dead and Pflug-Back sets up a sleazy, sad scene which will return in other poems.

‘Imposters’ is another poem in which the women dead at the hands of men are addressed. The poet’s total alienation from reality is thus expressed: “In real life I am just bones, Jennifer / wrapped in a shredded tarp beneath four feet of earth / in a culvert ditch somewhere in southern Ontario / dreaming that I met you.” The poem goes on the describe violent acts against women and ends with “I’m not here either, / You and I, we haven’t been here / for a long, long time.” Painful.

‘River’ is an elegy for one who’s left the poet. And we are presented with strange images like “My ancestors were sea serpents, I told you once / and guided your hands to the frilled crests of bone / that still ridge my skull at the temples”.

The book certainly reaches its apogee of misery in ‘My Bones’ Cracked Abacus’ with phrases like “my twisted arms” “broken teeth” “an instrument gutted”, but is made interesting with passages like:

“the birds walked hunched under their winter cloaks,

only graceful in flight.

they pull themselves, dripping

from the cluttered dark of your pupils,

where their wet feathers drag.”

‘Birch’ is another elegy for one who’s left, but have they left town or the planet? Who knows? In any case, we hope the poet doesn’t find them, as she says, “catching moths with the flame of your lighter.”

The poet takes her pills under supervision in ‘After the Fall’ and is depressed in ‘Stone’. But these two poems are but steps taken to reach the brilliant piece ‘A Chorus of Severed Pipes’. The word stone returns in the first line, thrown by her when a child, to break the moon’s reflection in water. “Wheat stalks sighed under the thresher’s blades, / a chorus of severed pipes.” Sigh. (Me.) Lovely, in a horrible kind of way. She danced “and the world sang to itself / to keep from being frightened.” Describing the power the child thinks she has over the natural world.

The next poem that I thought was outstanding was ‘Makeshift Ballroom’. What an evocative image. You could use those two words as a writers’ prompt, couldn’t you? The poem is short and dense.

Verse one, in which “somebody’s mother” gives a cynical interpretation of love, pulls us into verse two, where a memory of a childhood chant – step on a crack, break your mother’s back – is implied, and has Pflug-Back watching cracks but feeling her own back (double entendre intended?) “changing shape.”

She shifts to another childhood memory, a fairy tale in which the girl/princess’s finger is self-pricked, and she falls asleep “thinking that I’d wake and mistake your pupils / for little safe houses at night / because of the windows reflected in them.” And then she references that other place of alleged safety and pleasure: Christmas. “I breathed myself too high into somebody’s thrashing green branches / and even that fatigued me; // casting something altogether removed, / perfect and antiseptic and trailing strings of little lights.”

The ballroom was a traditional place to meet a mate, practise courtship rituals. But, in the final four lines:

“I think that you and I were never built for this dustless spill;

neither seraphim nor parasitic gulls

in this blue-choked parade of pretty girls.”

Roll-on disillusionment and thank you for your honesty. Should be required reading for all sixteen-year-olds.

‘Canadiana’ is one of Pflug-Back’s simple poems about a male ancestor’s imagined demise, he himself “trailing ash / of burnt-up bodies” as he arrives here and I think of the witches back where he came from.

And then – boom! again – back to some very strange ways indeed in ‘Sweet Mary, Her Body an Ark of Wild Beasts’, which title, I am sure, would have been seen as blasphemous by the authors of the MM.

“As a child, you told me

how you used to wake sometimes

to see a wax museum of saints

looming above your bed

the dark-haired Virgin standing over you,

her robes a swimming quilt

of fish and birds.

Their feathers are cursive, crested

she pressed her palm

to your chest, once

and fear died inside you.

I wonder where the mark of her hand is now

of a shattered city.”

“I want to open my eyes

to see her staring down at me

from the grotto tattooed

on your sunken chest

frail and impossible, a hothouse flower

blossoming in the nuclear heat.”

While I find this a strange land or mindscape to inhabit, I am struck by the beauty of the language.

Another of the poems that stood out for me was ‘What I Learned from You about Love”, a beautiful clear elegy. She had me with the first few lines. “Among the frigid tinsel stars / of Christmastime / I picture you, in childhood”. She situates the dead one in a couple of possible scenarios. “Maybe in death’s storm-wet forest / Pleistocene mammals // surround you with the musk / of their rough fur”. “Maybe you’re there / with your family / and those paper masks / have all been lifted / off their faces // borne like lanterns / into midnight branches // their arms a wreath around you / a sorry you never got to hear.” She brings us to something “vast as an ocean / or the first breath / of a newborn mouse // searching in its mother’s fur / for milk // stars and planets / and space debris / dancing in the endless black / of its closed eyes.”

And the poem ends with some words that I think should possibly be spoken as part of every eulogy. “How lucky it is to be born … to know … that this is all there is, / all there needs / to be.”

Louise Carson has published eleven books, two in 2020: Dog Poems, Aeolus House, and her latest mystery The Cat Possessed, Signature Editions. Her previous poetry collection A Clearing was published by Signature in 2015 and she’s twice been selected for inclusion in Best Canadian Poetry in 2013 and 2021. Louise also writes historical fiction. One such novel, In Which, Broken Rules Press, 2018, was shortlisted for a Quebec Writers’ Federation prize and a ReLit award. With her daughter and pets, Louise lives in the countryside outside Montreal.

Kelly Rose Pflug-Back’s fiction, poetry, and essays have been published in a variety of publications and anthologies, such as Counterpunch, Huffington Post, Fifth Estate magazine, This Magazine, Briarpatch, Imaginarium Speculative Fiction, The Vancouver Media Co-op, CrimethInc and more, and her work has received awards and nominations from the Rhysling Foundation, the P.K. Page Irwin Foundation, and the Great Canadian Literary Hunt. Pflug-Back holds a Bachelors in Human Rights and Human Diversity from Wilfrid Laurier University and a Masters in Development Studies from York University, where she studied the relationship between resource extraction and colonialism. Her poetry chapbook, These Burning Streets, was published with Combustion Press in 2012. Pflug-Back lives in Toronto.