Walking Across The Day by d.n simmers, New Westminster, BC: Silver Bow Publishing, 2020. 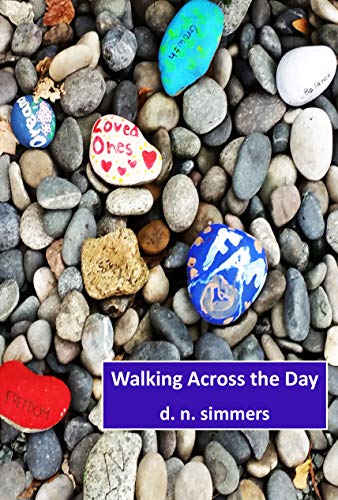 Vancouver poet d.n. simmers published his third collection of poems, Walking Across the Day, with Silver Bow in 2020. Entering into the book, the epigraph comes from the title poem, offering the lines, “Day is the omelette / made from and / folded into time.” This singular phrase marks the beginning of an exploration into what a day means, what it holds. The interesting juxtaposition of the omelette as an object, contrasted with the abstract concept of time, creates a unique metaphor that describes the interplay within daily moments, pulling between the existential and the mundane. As an entry point into the book, I felt, as a reader, as though I was watching the author dance with larger conceptual notions of time, of life, of the soul, while remaining anchored and always returning to the mark of the present.

The first poem, “I Remember,” is titled with the anaphoric phrase that rings out through the poem. “I remember…” continues to reverberate within the much larger space the collection creates for memory. Traveling with one foot in the present, another in the past, simmers asks questions of time’s relationship to experience. All of this develops a temporality in which every moment is included, where the mind of the poet and reader is permitted to wander.

simmers, who passed in 2020, was an active member of Vancouver’s Downtown Eastside Writing Collective. So, it was not surprising to me that some of his most powerful poems stand out for their imagery and lyricism portraying scenes, infused with surrealism, from the city’s neighborhood. “A small dog / with white whiskers / eats half a muffin” off the sidewalk while the dead “with their skeleton faces” look on. It quickly becomes clear, striving for expression, the poet’s world includes the living, the dead and ghosts. The ghosts in the work exist as phantoms of memory, of dream, but not gothic, approaching the speaker with a gentle and attentive haunting. Other powerful, memorable and confessional poems, sprinkled through the book, deal with issues of alcohol-use and of addiction, evoking vivid images like “the glass eyes of liquor vampires.”

Many of the poems are titled with lines borrowed from other poets. These frequent borrowings originate from a range of modernists, Romantics and Beats as well as contemporaries. I found that this explicit act of naming influence reminded me of how the scaffolding of a poet’s praxis is most often secured by their own unique conversations between their reading and their writing lives. Billy Collins said, most poets write because they first read a great poem. Wishing they had written it themselves, they then go off and attempt to write their own. With simmers, I sense that it is not jealousy, but more likely admiration as the catalyst. His approach feels non-egoic, more of like a poetics of absorptive reading, then a release of what wants to be written.

Two-thirds of the way through the book, “The Mistakes Are Not Erased,” is a piece which serves as an effective ars poetica. The poem effectively highlights the poet’s general approach, that is to hold words loosely, abandoning the pat, technical rules of writing in favour of the source, muse, point of inspiration. Prior to coming to this poem, I was somewhat distracted by various bits of coarse phrasing, at times tripping over odd syntax, seemingly errant punctuation. However, this “Mistakes” piece induced me to retrospectively consider the book’s previous accumulation of poems. Reading back through them inclusive of ‘error,’ re-viewing through this lens, I was then fully equipped with a new perspective. I was comfortably carried forward into the remainder of the collection. “Telling” at times, the didactic quality re-registered itself as an intimacy with the speaker, landing on my listener’s ear with an endearing quality. It is likely that a more elevated register would have the power to attenuate this. In total, I concluded that any error or deviation from expected norms in the collected poems made them feel more pure and ‘of this moment.’ The poet’s freedom is found in an overriding need to speak, to break silence without regard for convention or prescribed ways of being in a poem.

Notably, simmers’ voice often resembles the natural patterns of unrehearsed speech. His post-Wordsworthian gaze and vocabulary is coupled with the influence of the Black Mountain/Beat poets. With this in mind, it struck me that a good number of his poems, in their construction, appear to align with something like Ginsberg’s mode of automatic writing, vis-à-vis the mantra, “first thought, best thought.” Writing in this intuitive mode, simmers conveys to his reader, “[t]here was this feeling / and a hurricane was crashing in / and another followed it.” As a reader, I could often feel the push of the poet’s ballpoint pressing into paper. The result delivers writing that comes across as intrinsically fresh. Continuing with writing as a feeling or an impulse, other notable poems engage more overtly in the playful use of language as the speaker is found “breathing and walking around / with the dancing bear / of life.”

There is more to be said, of course, as the tone of the collection ranges from the memorial to the immediate. Equal parts confessional, elegiac, meditative and at times melancholy. The bulk of the poems are attentive to daily events of a speaker passing through them, “wandering and wondering / what if and why.” Whether walking across a street or a field, the process of walking, in the non-infinitive, is often reflexive, as the introspective speaker strives to amplify the significance of the ordinary. The act of walking, which is normally unremarkable, in the hands of this poet, becomes a mindful investigation. By the end, every ordinary moment “like a strange wave / that comes together and begins / breaking apart” is gathered and assembled into the mosaic of a day.

Michael Edwards is a writer living in Vancouver, BC on traditional, unceded territory of the Musqueam people. A graduate of The Writer’s Studio Online at SFU, his poems and prose have been published in various online journals. He is also the editor of Red Alder Review, an online publication focused on building connections between writers and the wider community. Blog: michaelwriter.home.blog // Twitter: @michaelwrites1

d. n. simmers  has published 3 books of poetry —the 1st was Food Truck Elements of Shadowed Lights (Silver Bow Publishing 2018), which was a finalist in the annual Fred Cogswell Award For Excellence in Poetry 2019. His second book of poetry, The Red School Bus (Silver Bow Publishing) was released in 2019. He was born and raised in Vancouver, BC  Canada.