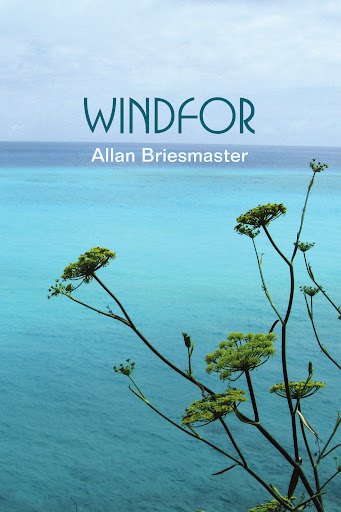 As I was curious about the origin of the title of the book, I flipped ahead to the title poem, which lies roughly at the book’s half way point. This is what I found: a poem full of feeling, a love poem, a request or a mild prayer for companionship “to round my orbit…common ground.” The word windfor was made by the poet by squashing together wind and for; and this echoes the wish in the poem for “A constellation / of two…” to which the addition of air blows away any eyes’ accretions which may have led to boredom or staleness. “Give us wind for our eyes.”

So why put this poem at this point in the book, as the opening poem of section two – From Division? I figuratively trudged back to the beginning of the book and commenced reading the poems in order.

Section one, A Traveller, begins with the poem ‘esse est percipi’, which means: to be is to be perceived. And it’s a love poem with a simple idea. That to love gives an otherwise solitary life meaning. (The book is dedicated to the poet’s wife.)

Subsequent poems in this section discuss coming of age and how uncomfortable that can be. ‘A Connection’ is a forerunner of the poem ‘Windfor’, an almost love poem, though we aren’t sure to whom it’s addressed, just someone, like the poet, not “cool in youth”.

The title poem of the section ‘A Traveller’ muses on the freedom inherent in travel. “one’s own compass-needle / spins to the draw of an unfixed pole.” And how “The mirror-walls / drop.” What Briesmaster is doing is drawing an analogy between maturing and travelling. “Mind becomes honeycombed, chiaroscuro / of laneway, boulevard, citadel, green arcade. / Cobbles, footpaths. Ley-line.” “Across sunset-glow, your private story / fills out”. And one incorporates “a vision // no longer fed by your parish of origin.” He concludes “in the end, no homely harbour endures.” Nice.

Those who’ve read other of my book reviews will remember that when challenged by my ignorance in a poem, I look things up. So it was with ‘Shackleton’s Version’. I read it then looked up the title character – Ernest Shackleton (1874 -1922), an explorer of the Antarctic and known for his persistence in never giving up, especially on his third expedition which featured disaster after disaster. As I’ve aged chasing my dreams, I recognize persistence, or stamina if you like, to be the most necessary virtue. And Briesmaster gives us what he imagines might have been Shackleton’s philosophy in one stanza of the poem.

“I could never afford to sink into fear.

Something in me knew: if I could hold myself

together, model hope and confident cheer,

persist, methodical, and patient and fair,

then everyone would get home from this alive.”

And they mostly did.

By now in this book, we’ve reached maturity and even age. ‘How age’ continues “calls us, now, to both sustenance / of the time-proven and letting go the rest.” And in ‘Some Things I Miss’, the poet shares his firm conviction that behaving well is the most important part of caring.

Sometimes, I like to write poems that have an important word at the end of each line. And sometimes, as the poem unwinds, this just happens.

‘Under Planets Again’ is one of Briesmaster’s careful, philosophical poems, and who’s to say whether he placed key words at the end of each line by design or accident. Here’s a sample of end words from the middle of the poem: “alone / ensorcelled / strain // sense / becoming / lustres // turn / realization / jovial” (in the sense of the planet). And at the end of the poem: “stifled / belief / knowledged // comprehension / us / reach”. Quite inspirational, no? This poem ends the first section A Traveller and leads to the second section From Division where we find the poem ‘Windfor’, already discussed at the beginning of this review.

On this second reading of ‘Windfor’ I discover the lovely line “Let air, backed by the sun of your look / circle in.” Perhaps we all can try to offer warmth to those around us, those who care to look, that is.

Division bad, conjunction good, seems to be the theme of this book. Not that all is sunny.  Several of the poems in this section are about depression. The wonderfully titled ‘Shadowgaps’ declares “You drift… / distant, shrunken” while ‘Prayer in Dimness’ asks “Grant me the higher light.” Though the poet knows the valleys will be darker and deeper in contrast. But the title poem of the section ‘From Division’ reassures as it talks about a “mutuality / windowed throughout my wall.”

In ‘In Existential Twilight’ Briesmaster laments the greed of some of the world but is firm that hope is necessary. (I may disagree with the concept of hope – something is or is not – but honour his impulse.)

More poems about politics, then relationships follow until section three On All These Walks begins and we hear the poet’s lyric, nature-venerating voice. In ‘A Mid-April Credence’ we get this passage. Listen to the vowels transition from i’s through o’s to a’s.

“The wind holds its breath;

but twig-tips need no motion to intone

And in the ecstatic ‘At Flower Garden Heart’, a >-shaped poem, this at its centre:

“a welled immersive yearn to keep

the mode of bumblebee, golden thigh-deep

in wading up that lavender-fur spire –”

In the last poem of this section, he addresses the dead in ‘Eastward from Sunset’. He senses their presence and wonders if his will someday make itself known to those still alive. It includes the lovely line “What traces waken across vacant dark?” And this poem is the segue to the last section of the book Passage After which is short but contains some of the most perceptive writing of the book as Briesmaster thinks about death and the possibilities afterward.

He doesn’t know. Who does? In ‘Ensouling’ which has the subtitle ‘speculations’, he asks “Is the weave at the centre undone?” and concludes that asking “hard questions, headed beyond the last veil.” is his only option.

‘On Crossing Alone’, the five-page poem that concludes this book, is also a speculation. It has its moments.

“Find what it is

will serve as for-

ward wings that could

in no way spread, before.

And “While, ever past // each passage after passage, you / unbend.”

As I mentioned, the last words of lines of poetry can be powerful. Likewise, when one puts the titles of the four sections of Windfor together, one gets this:

on all these walks

And I return to the book’s title poem one last time, to absorb the poet’s thesis: that humanity and the spiritual combine when we love. Just cross. To more openness, more caring.

Louise Carson has published eleven books, two in 2020: Dog Poems, Aeolus House, and her latest mystery The Cat Possessed, Signature Editions. Her previous poetry collection A Clearing was published by Signature in 2015, and she’s twice been selected for inclusion in Best Canadian Poetry – in 2013 and 2021. Louise also writes historical fiction. One such novel, In Which, Broken Rules Press, 2018, was shortlisted for a Quebec Writers’ Federation prize and ReLit award. With her daughter and pets, Louise lives in the countryside outside Montreal.

Allan Briesmaster is a freelance editor and publisher. He was a founding partner in Quattro Books and currently runs his own literary press, Aeolus House. He is the author of eight books of poetry, most recently The Long Bond: Selected and New Poems (Guernica Editions, 2019), and he has read his work, given talks, and hosted literary events across Canada. He lives in Thornhill, Ontario.