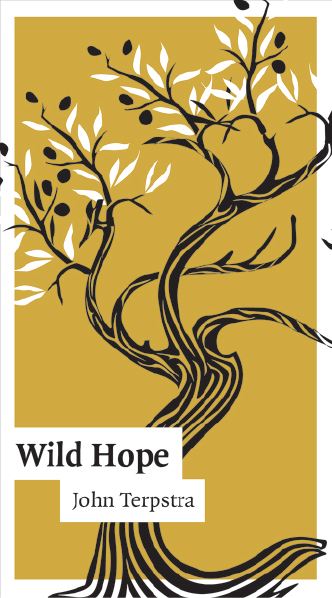 John Terpstra’s book of prayers takes its title from the final line of “The Kind of World We Live in,” the first poem in his collection. This Lenten poem was written pre-COVID-19 but was likely influenced by the rumblings of the coming pandemic and most certainly by other existential threats such as global warming and war. In it, the poet straps on his backpack with the world shoved temporarily inside. Hope comes with fasting and submersion in the natural world, a transformation reflected in the language of the poem. Terpstra’s gut-wrenching and earnest imagery of the first stanza gradually evolves into thought with only the broadest descriptions. The poet has given up the noise of specifics to convey a quietude within.

This is not to say that the other pieces in the collection aren’t powerful in their imagery. They most certainly are. From “Holy Innocents’ Prayer,”

thinner than the barrel

who have no enemy

These prayer poems of Thanksgiving and Intercession were written for Hamilton’s St. Cuthbert’s Presbyterian Church and as such, they are accessible. The poems do not require a run to the dictionary or a hunt through a concordance to find obscure biblical references, though I suppose a reader might wish to Google “Caravaggio’s Deposition, or Entombment” to fully appreciate “The Disciple Cradles in His Arms the Dead Christ,” if unfamiliar with the painting.

Social justice themes run throughout these poems and prayers mainly concerning housing, inequity, and the exploitation of children and of the poor. But hope is always present in prayer, even with the honest acknowledgment of so much wrong in the world. While addressing these issues, Terpstra injects enough wry humour here and there, to acknowledge that joy is also a part of prayer.

For the generosity of the earth

which grows our food

what to do with it all

But even “A Prayer for All of the Pumpkins,” the most light-hearted poem in the collection, concludes with more.

Thank you for the meat

and for the seed

of this funny food

and later in the prayer,

Help us to know

our place in the scheme of things

Children of the maker

and to the world

When I received Wild Hope, a book published 2020, I suspected it might contain Covid-19 poems, a topic I admit I have become fatigued by. Most of Terpstra’s prayers were written pre-pandemic, and yet they speak presciently to our current situation. I have been enriched and heartened by these poems and prayers, as I suspect parishioners at St. Cuthbert’s were upon first hearing them.

Carol L. MacKay is a poet and children’s writer living on Vancouver Island. Her poems have appeared in The Fiddlehead, Antigonish Review, Prairie Journal, The New Quarterly, and as part of LCP’s Poem in Your Pocket Day 2020 postcard project.

John Terpstra is a poet and non-fiction writer who lives and works as a carpenter and cabinetmaker in Hamilton, Ontario. He has published ten books of poetry and several works of non-fiction, including The Boys and Falling into Place. In addition to many readings at St. Thomas’s Church, he has published Devil’s Punch Bowl (1998) and In the Company of All (2016) in The St. Thomas Poetry Series as well as contributed to Anniversary Poems (2013) and two anthologies: Poetry and Spiritual Practice (2002) and Poetry as Liturgy (2007).