The League of Canadian Poets is proud to announce the winners of our annual awards: the Gerald Lampert Memorial Award, the Pat Lowther Memorial Award, the Raymond Souster Award, and the Sheri-D Wilson Golden Beret Award. These awards are given in recognition of incredible talents in Canadian poetry. Each winner will receive $2000, thanks to funding from Canada Council for the Arts , Ontario Arts Council, Toronto Arts Council, and Canada Book Fund. 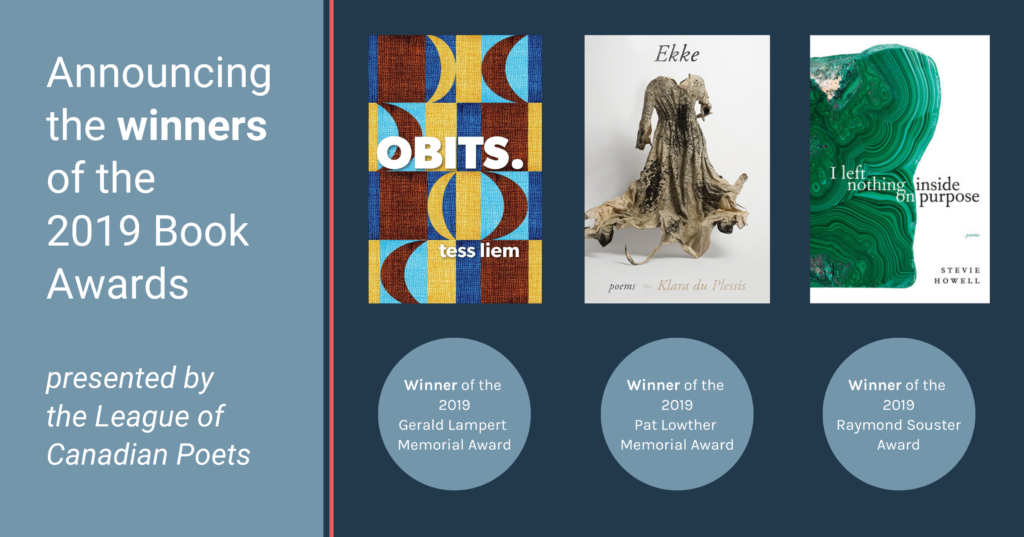 Gerald Lampert Memorial Award for a debut book of poetry 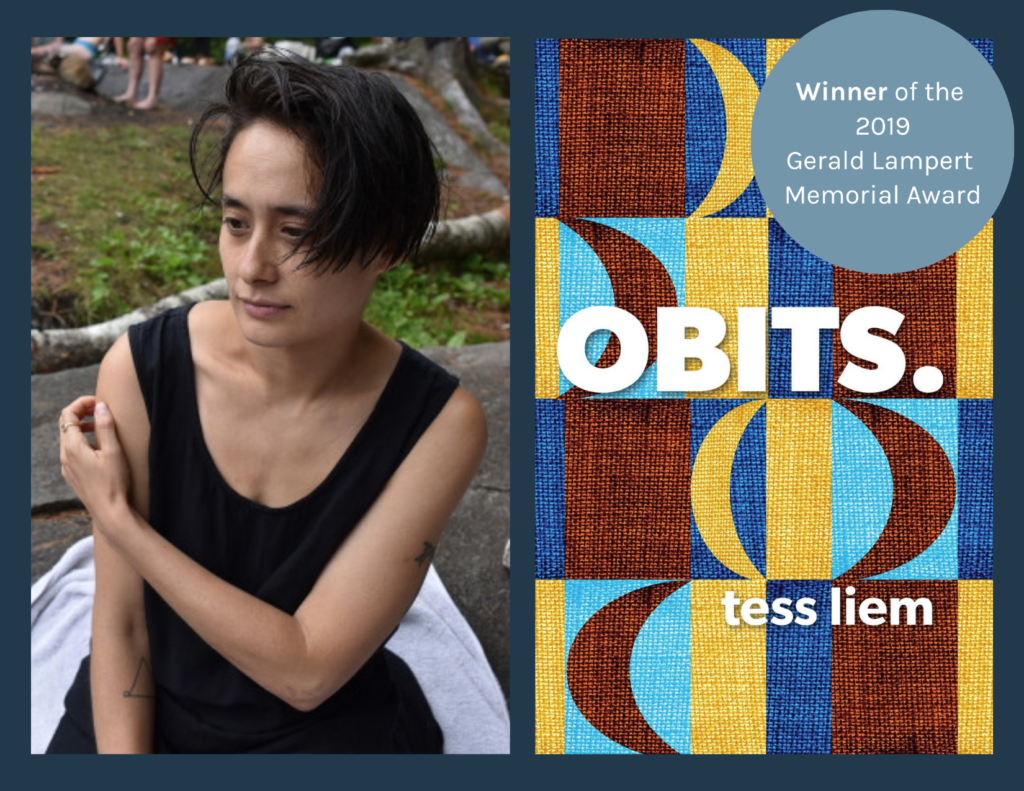 From the publisher: Can poems mourn the unmourned? In Obits. a speaker tries and fails to write obituaries for those whose memorials are missing, those who are represented only as statistics. She considers victims of mass deaths, fictional characters, and her own aunt, asking what does it mean to be an ‘I’ mourning a ‘you’ when both have been othered? Centring vulnerability, the various answers to this question pass through trauma, depression, and the experience of being a mixed-race queer woman.

From the jurors: Tess Liem’s Obits. is a rare success for any book, let alone a debut. Namely, it manages to create what feels like an entire intellectual world: whole ethics, aesthetics, aspirations, fears, and philosophies, line by line and trope by trope. The book takes real risks dangling over the edge of amateurism with its emotive openers and its centre-alignment, and relies on nothing but prosody and guts to win a skeptical reader back. It contains one of the most complete treatments of depression in Canadian poetry and an expansive, challenging, new approach to the idea of mourning. Most importantly, Liem’s ability to manage the collection itself as a gestalt object, tying images to one another across pages and reusing titles, sounds, and lines, is downright symphonic. It feels like someone’s life’s work.

Click here to read “Adaptation” from Obits. and here to order a copy of the 2019 Gerald Lampert Memorial Award-winning title from Coach House Books.
.
.
Tess Liem lives in Tio’tia:ke/Mooniyaang—unceded Haudenosaunee and Anishinabe territories (Montreal QC). Her writing appears in The Puritan, Plenitude, Cosmonauts Avenue, THIS and elsewhere. Her debut collection of poetry, Obits. (Coach House 2018), was shortlisted for a Lambda Literary award. 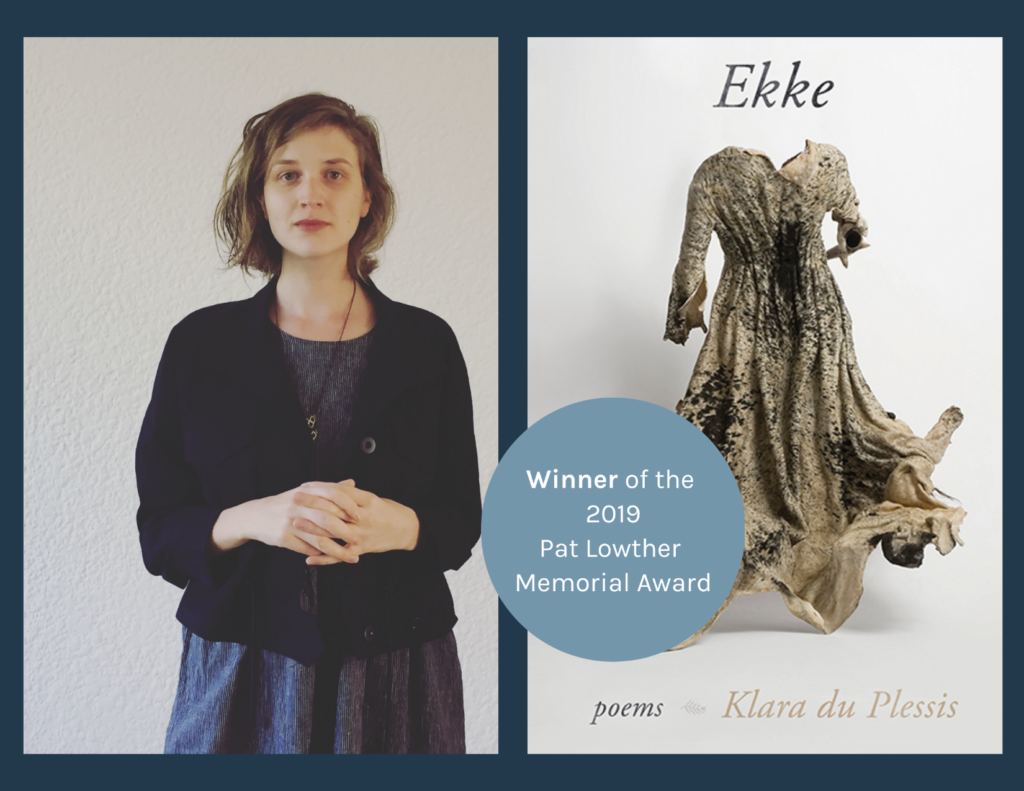 From the publisher: Multilingually inflected, Klara du Plessis’ first collection of poetry explores the multiplicity of self through language, occupying a liminal space between South Africa and Canada. A sequence of visceral, essay-like long poems, du Plessis’ writing straddles the lyrical and intellectual, traversing landscapes and fine arts canvases. Ekke is a watershed debut from one of Canada’s most exciting young voices.

From the jurors: An intelligent book constructed of long poems, Ekke reflects on the strange vagrancy of meaning and slippage of sounds between different languages. Both politically conscious and aesthetically beautiful, Ekke reads like a combination of the best parts of Lisa Robertson and M. Travis Lane: brainy and beautiful meditation with a beating lyric heart.

Click here to read an excerpt from “Someone Other Than Else” from Ekke and here to order a copy of the 2019 Pat Lowther Memorial Award-winning title from Palimpsest Press.

2019 Winner: I left nothing inside on purpose by Stevie Howell (McClelland & Stewart) 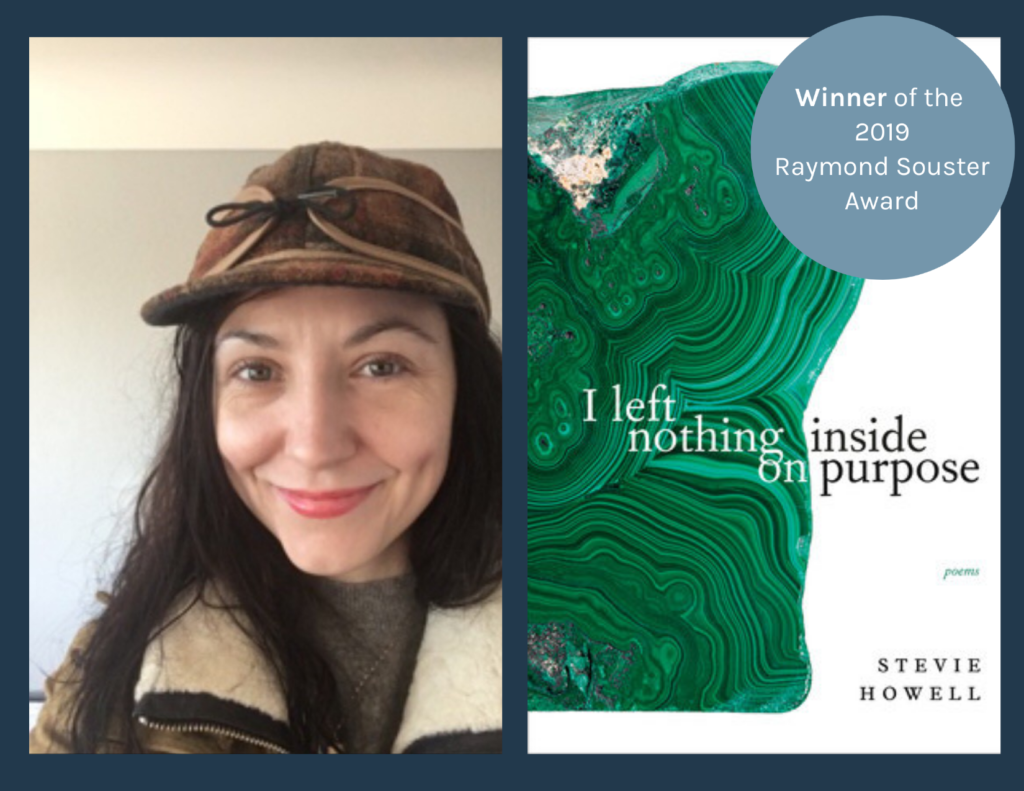 From the publisher: Poems of stringent aesthetic demands and volcanic emotional release make up Stevie Howell’s wondrous I left nothing inside on purpose. These poems–bewildering in their linguistic beauty–verge on prayer in their intense plea to be truly seen by another, a sort of devotional sequence addressing the psychological construct of attachment. Can we change? Has anyone ever changed? Does it matter? Lives marred by injury and violence, both physical and psychic, emerge in the book as meditations on trust, endurance, faith, destruction, and love. Howell’s voice combines ferocious intimacy and moral rigour with precision and compassion. The Hawaiian surf, the neuropsychologist’s lab, the deliriums of social media, and the recovery room. From geology to theology, lyric pain to the contemplative mind of the quasi-saint, I left nothing inside on purpose is a deeply affecting, glittering analysis of who we are when we claim to be ourselves in the world.

From the jurors: Stevie Howell’s poems create a dazzling sense of contemporary experience, with all its wounds, as well as the bruising quality of the past: an AI bot named Tay learns to be racist and sexist from “Talking w/ humans;” Kintsugi pottery and fragments from Kierkegaard, D.H. Lawrence, and the vocabulary of self-help rattle through the deceptive transparency of Howell’s lines. The voice here insists on ironic distance and uncomfortable intimacy, poetic history and the banality of the present, “crowdfunded innocence” and “how pain never knows when to stop.” This collection is sophisticated, funny, and sad, often within the same line.

Click here to read “I welcome the wound &” from I left nothing inside on purpose and here to order a copy of the 2019 Raymond Souster Award-winning title from McClelland & Stewart.

Stevie Howell is a psychometrist & writer who lives in Victoria, BC. Stevie’s second collection of poetry, I left nothing inside on purpose, was released last spring by Penguin Random House Canada. Stevie is currently writing a thriller, & forever working on her afterlife. 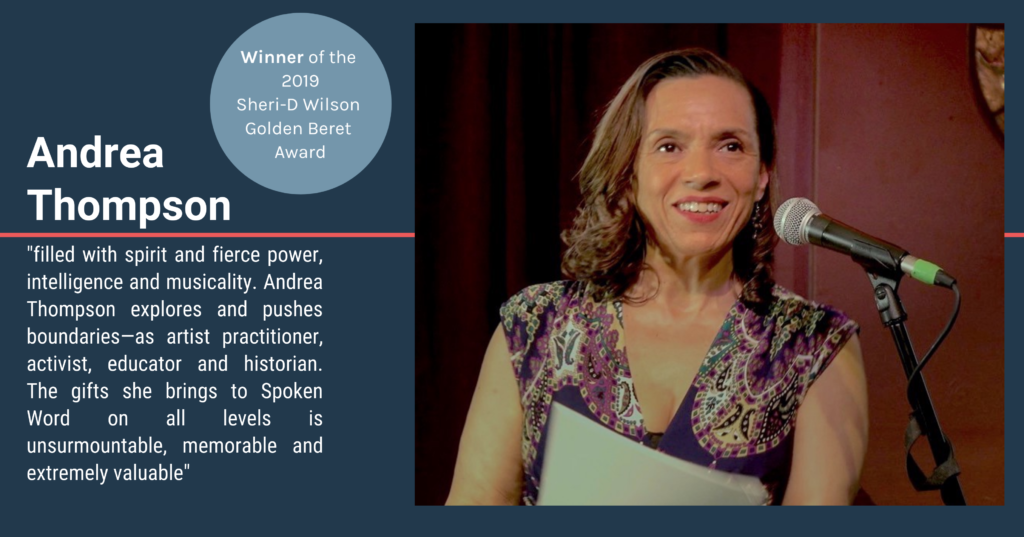 From the jurors: Andrea Thompson is a Canadian icon of Spoken word and her submissions reflect her long and praiseworthy career. The work is well-written and professionally produced with top notch recordings—as Andrea presents a strong-woman voice filled with spirit and fierce power, intelligence and musicality. Andrea Thompson explores and pushes boundaries—as artist practitioner, activist, educator and historian. The gifts she brings to Spoken Word on all levels is unsurmountable, memorable and extremely valuable!

Andrea Thompson is a writer, educator and spoken word artist who has been publishing and performing her work for over twenty-five years. In 1995 she was featured in the documentary Slamnation, as a member of the country’s first national slam team. In 2005, her spoken word CD One was nominated for a Canadian Urban Music Award. She is the author of the novel Over Our Heads and co-editor of Other Tongues: Mixed-Race Women Speak Out (both Inanna Publications). Thompson currently teaches at Workman Arts, as well as through the Ontario College of Art and Design University and The University of Toronto’s Continuing Studies departments. She has written several academic essays on spoken word, “Spoken Word: A Gesture Towards Possibility” (Writing Creative Writing: Essays from the Field,2018).  Her most recent CD, Solorations, is available through iTunes, Amazon and most online streaming services.

You can view the 2019 Book Awards shortlists here.

WINNER: For Your Safety Please Hold On by Kayla Czaga (Nightwood Editions)

And I Alone Escaped to Tell You by Sylvia D. Hamilton (Gaspereau Press Ltd.)

The Quiet by Anne-Marie Turza (House of Anansi Press Inc.)

A Quiet Coming of Light by Jude Neale (Leaf Press)

Cinema of the Present by Lisa Robertson (Coach House Books)