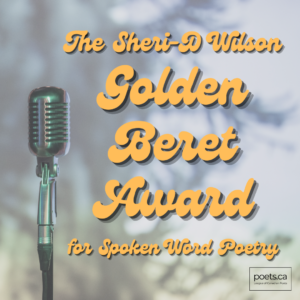 The Grand Prize for the Sheri-D Wilson Golden Beret Award is $2000.

With this prize, the League is excited to be focusing on spoken word poetry—including dub poetry, sound poetry, and slam poetry, among many other subgenres—and it’s rich and powerful history that has grown to take the international stage by storm.

Nominations for the 2021 Golden Beret Award are now closed.

The Sheri-D Wilson Golden Beret Award was founded by Sheri-D Wilson and the Calgary Spoken Word Society. Past iterations of this award have honoured Canadian spoken word artists who made substantial contributions to the development of spoken word, through the originality of their writing/performance works and involvement in the expansion of the spoken word community.