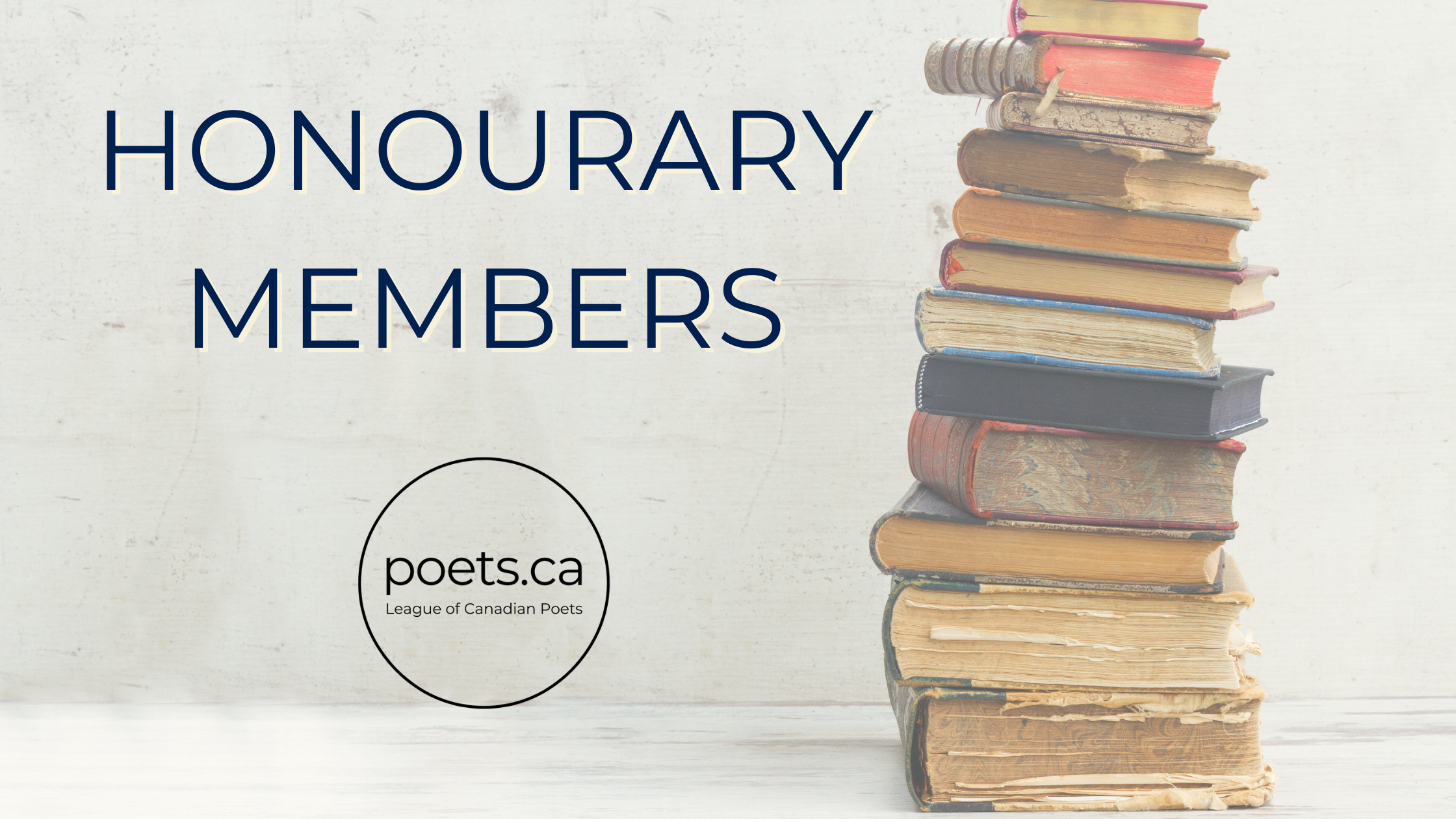 The League is proud to welcome new honorary members into our ranks each year. The Honorary Membership award is presented to distinguished individuals as a mark of distinction and appreciation for special achievements and contributions to the art of poetry.

Below is a full list of Honorary Members of the League of Canadian Poets.

From the team at Massy Books: Poetry allows us to confront and enhance our sensitivity to the ways in which we understand words, thoughts, and experiences in our physical, sensorial, and cultural worlds. Whether at readings, open mics, book launches, or literary workshops, Massy Books has experienced how these events are a form of collective healing, proving how important it is for humans to deepen our understanding of one another, the importance of presence, and the need for connection in our present time. When a community listens, when stories are shared and voices become intertwined, our community becomes more alive.

2018: University of Regina Press, a little house on the prairie with big ambitions, publishing books that matter–in both academic and trade formats (including Measures of Astonishment).

2017: Gord Downie, poet and lead singer of The Tragically Hip

2015: John Toews is the Events Coordinator for McNally Robinson in Winnipeg. He is known for his mellifluous voice behind the microphone, his love of books and for 5 years he has been known as one of Winnipeg’s biggest supporters of writers both traditional and self-published. On behalf of McNally Robinson Booksellers he welcomes local and visiting writers to the reading venues at the popular independent bookstore.

2014: Prior to her retirement (2020) Kitty Lewis was the helm of London-based Brick Books, the only press in Canada that specializes in publishing poetry books.

2013: Jean Baird in the President of the Al Purdy A-Frame Association.

2011: The Stursberg family. The League of Canadian Poets’ youth poetry contest is funded through a generous donation from the Stursberg family, in honour of their late mother Jessamy Stursberg. The establishment of this award is meant to honour the memory of Jessamy and her life long love of poetry. She believed with Christopher Fry that “Poetry is the language in which man explores his own amazement”. Poetry was – for her – the deepest way of understanding the world. Her keen mind retained impressive amounts of verse, most of which she knew by heart. This gift became a comfort once her eyesight failed. It is the wish of her family to see Jessamy’s love of poetry carried on by young people. Through this fund, Canadian youth now have access to greater opportunities to grow, as poets, through the love of writing, reading and instruction.

2009: Helen Fogwill Porter is a Canadian author and activist.

2009: Ray Mitchell, Chartered Accountant, has been Treasurer of the League of Canadian Poets since 2006. He obtained chartered accountant designation in 1971 after attending University of Western Ontario and University of Toronto. He retired in 2005 and is now doing contract and consulting work. Other organization affiliations include fundraiser for The Toronto Zoo, past director of Etobicoke Community Care Access Centre and past Director Fundserve, CDS Inc. Federal Trust Company. His other interests include birding, theatre, bridge, golf, fishing and sports.

2008: Martin Levin is the former Books Editor at the Globe and Mail.

2007: Judy Mappin is a Canadian bookseller and philanthropist.

2005: Gwen Hoover is a fundraiser and experienced arts administrator for organizations such as the International Festival of Authors, Prince Edward County Music Festival, Canada Council for the Arts.

2005: Edward Lemond is a poet and bookseller.

2004: Gaston Bellemare is the President & Founder of the Festival International de la Poésie. He was awarded Honorary Membership  in 2004.

2002: John Flood is the President of Penumbra Press.

2002: Prior to his retirement, Randall Ware was the Manager of Cultural Programs at Library and Archives Canada.

2001: Scott Griffin is a Canadian businessman and philanthropist best known for founding the Griffin Poetry Prize, one of the world’s most generous poetry awards.

2000: Joe Rosenblatt has written more than 20 books of poetry, several autobiographical works and his poems have appeared in over thirty anthologies of Canadian poetry over his forty year career as a poet. His poetry books have received major awards, such as the Governor General’s award for poetry in 1976 and the BC Book Prize in 1986.

1994: Peter Gzowski (1934-2002) was a Canadian broadcaster, writer and reporter, most famous for his work on the CBC radio show Morningside.

1991: Greg Gatenby in an author and poet. In addition to his work as a writer, Greg Gatenby was the founding Artistic Director of the world-renowned, annual International Festival of Authors (IFOA) and of the weekly Harbourfront Reading Series.

1991: Irene McGuire is the owner of Writers & Co., The Literary Bookstore in North York.

1990: Angela Rebeiro served as Executive Director of the League of Canadian Poets, Playwrights Union of Canada and the publisher of Playwrights Canada Press.

1981: Arlene Lampert was the first Executive Secretary and later Executive Director of the League of Canadian Poets in the 1970s. She was married to Gerald Lampert.

John Robert Colombo is an author, anthologist, and communications consultant.

Jack Stoddart ran General Publishing Co. and its offshoot, General Distributions Services, what became the largest publishing and distribution group in Canada until its collapse in 2002.

Colleen Thibaudeau (1925-2012) was a poet and short-story writer. In 2012 the League of Canadian Poets and Colleen Thibeaudeau’s family established an award in memory of the late poet. The award was created to honour and recognize a substantial volunteer project or series of projects that significantly nurture and support poets and poetry across Canada.