Our events calendar is under construction!

If you would like the LCP to share your event and it is not listed on Facebook, email laura@poets.ca for more info on LCP communications and how we can help. 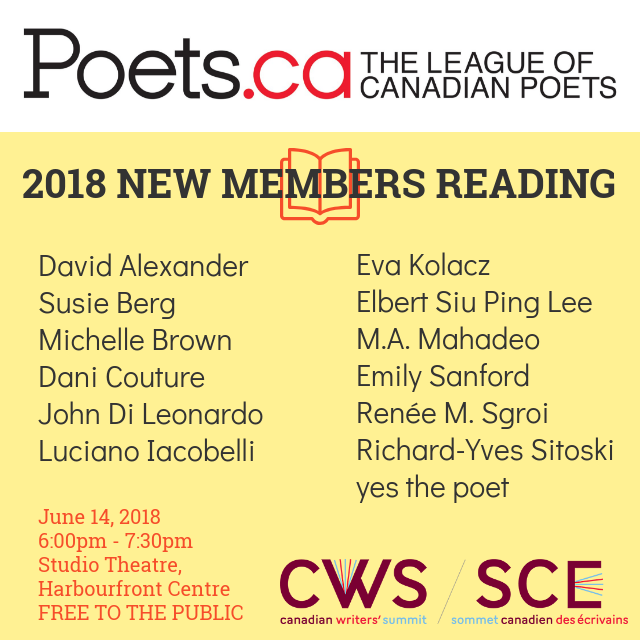 Join the League of Canadian Poets in celebrating their new members from the past year at the Joseph Sherman Memorial Reading! This event is free and open to the public.

David Alexander is the author of two chapbooks and a full-length debut, After the Hatching Oven, published this spring by Nightwood Editions. His poems have appeared in journals and magazines including The Puritan, The Humber Literary Review, and the Literary Review of Canada. He works for The Word On The Street festival in Toronto.

Susie Berg is the author of two full-length poetry collections from Piquant Press, including her most recent, All This Blood. She has also published two chapbooks and a Lyrical Myrical Press handbound book with one of her mentors, Elana Wolff. Her poems appear in various journals and anthologies, and she spent two years as the curator of Toronto’s Plasticine Poetry Reading Series. Find her online at http://sber40.wixsite.com/susieberg.

Originally from Victoria, BC, Michelle Brown now lives in Toronto. Her work has previously appeared in Arc, CV2, Prism, The Malahat Review and The Walrus, amongst others. A finalist for the CBC poetry prize and Young Buck poetry prize, Safe Words (Palimpsest Press, 2018) is her first full-length collection.

Dani Couture is the author of three collections of poetry and the novel Algoma (Invisible Publishing). Her work has been nominated for the Trillium Award for Poetry, received an honour of distinction from the Writers’ Trust of Canada’s Dayne Ogilvie Prize for Emerging LGBTQ Writers and won the ReLit Award for Poetry. Her latest collection, released this year by Wolsak & Wynn is Listen Before Transmit.

John Di Leonardo is a Canadian visual artist/poet. He has published two award winning chapbooks Book of Hours (2014), Starry Nights (2015), and is the recipient of the 2017 Ted Plantos Memorial Award. John’s book of ekphrastic poems Conditions of Desire will be published in 2019 by Hidden Brook Press. He writes and paints in Brooklin, Ontario. You can visit him at johndileonardo.ca.

Luciano Iacobelli is a Toronto born Poet, publisher and visual artist. He is the author of numerous chapbooks and five full length books of poetry. He is the owner of Quattro books and also Lyricalmyrical press, a minipress specializing in hand made chapbooks. As a poet, Luciano Iacobelli is eclectic and is interested in both conventional and experimental poetry. In his most recent books, the Emu Dialgues and The Examined life he very much endeavors to expand the boundaries of language. His recent poetry has a strong visual component and incorporates graphics and unconventional spacing of text.

Eva Kolacz is a poet and painter whose works are inspired by the multifaceted nature of both the interior and exterior world.  In her native Poland, she debuted as a poet and became a member of a writers’ association. After immigrating to Canada in 1981, she continued to write and publish poems.  She is a member of The Ontario Poetry Society and the Polish American Poets Academy and an elected member of the Ontario Society of Artists.  Eva lives in Oakville with her husband the poet, Laurence Hutchman.

Elbert Siu Ping Lee grew up in Hong Kong in the New Territories, at a time where pigs and piglets roamed the streets alongside humans and cars. In the mid 70s, they came to Canada to study at McGill University. Later that decade, they went for graduate studies in New Zealand and briefly served as editor for a newsletter for a small religious community. Since then, they have lived in Hong Kong, Toronto, and Montreal. Moving between cities for a poet translates into a vast and ever-changing space for poetic imagination responding to different forms of beauty and sensuality appearing at particular times and spaces. These ‘gems of encounters’ were the sources of inspiration for their book Rain on the Pacific coast, published in 2013.

M.A. Mahadeo is a 24 year old poet from Queens, New York, who now loves living in Toronto. Her work is featured in Man In The Street Poetry Magazine, Blood & Bourbon, Rejected Lit, and Fresh Voices.

Emily E. Sanford was born in Nova Scotia and holds an MA in Literature from Guelph. She is the winner of the 2016 Eden Mills Writers’ Festival Literary Award for Poetry, and her work appears in Canthius, Grain Magazine, Minola Review, newpoetry.ca, Plenitude Magazine and is forthcoming in Applebeard Editions’ anthology of Flash Fiction. Emily is the Creative Writing Program Administrator at the University of Toronto School of Continuing Studies, and co-hosts the Brockton Writers Series.

Renée M. Sgroi recently edited the anthology, Written Tenfold (Poetry Friendly Press) for the Brooklin Poetry Society, of which she is also president. Her work has appeared in The Prairie Journal, Prairie Fire, The Banister, and Verse Afire, as well as anthologies published by Beret Days Press. As a new member, Renée is excited to participate in her first League event. You can find her online at https://reneemsgroi.com and on Twitter at: @ReneeMSgroi

Richard-Yves Sitoski is an Owen Sound poet and songwriter. He is currently an event coordinator for the Words Aloud Spoken Word and Storytelling Festival. He has released an album of spoken word verse, Word Salad (2017), and two volumes of poetry, brownfields (2014) and Downmarket Oldies FM Station Blues (2018). He is also a member of the Métissage Collective, a group dedicated to exploring the lesser-known stories of Owen Sound’s history in song and verse.

yes the poet [they/them] is a Cuban queer non-binary androfemme and activist with too many feelings. They are a Canadian National Slam Champion, arts educator, member of the Voices of Today Festival Organizing Committee (Canada’s National Youth Slam), and an activist/organizer with No One Is Illegal – Toronto and the Mining Injustice Solidarity Network. yes is a prison abolitionist, intersectional feminist, leftist and anti-state activist. They write a lot about state violence, being Very Gay, their feelings (read: personality & mood disorders), and reclamation.