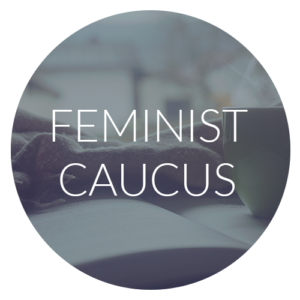 Founded in 1981, the Feminist Caucus is a Standing Policy Committee of the League of Canadian Poets. Membership is open to any League member who shares the goals and objectives of the Caucus. All League members may participate in the annual business meeting as well as the annual open reading. Find out more about the history of the Caucus here! Join the Caucus and receive email updates by signing up here. For questions about or interest in the Feminist Caucus, email litfeminist@poets.ca.

You can find a collection of selected media on the Feminist Caucus and its publications here.

In agreement with the LCP constitution, the Feminist Caucus declares its passionate support for freedom of expression and to uphold an attitude and governing policy that commits to the respect for all people – of all ages, sexes, sexualities, genders, races, religions, abilities and classes. We will work to educate ourselves, our organization and the larger community about racism built on white supremacy, anti-black racism, and anti-indigenous racism and colonialism in Canada. As Feminists, we will work towards changing our practices to better reflect, include and give power to persons who have been systemically marginalized in Canada.

We are committed to the unity of professional poets across the country, and will take action as to demand support in an atmosphere of respect, education and cooperation with intentions built on breaking through barriers so to create and embrace a synthesized community – within the League and beyond.

Updated 2017 by the League’s Feminist Caucus

Documents from the Feminist Caucus

New! Check out the Feminist Caucus in Conversation Series

The Living Archives Series documents the presentations of the panels sponsored yearly by the Caucus since its founding within the League in 1982, and includes various texts, correspondences, and other works significant to its history and the discussion of women and language in poetry. The series has become part of Women and Gender Studies at universities and colleges University of Western Ontario, in London, Ontario.  It has also garnered positive reviews, such as in Canadian Literature, a preeminent refereed academic journal. Sumptuous high-cost, perfect-bound, glossy editions have been published in past years by partnering with book publishers such as Quarry Press and Broken Jaw Press.