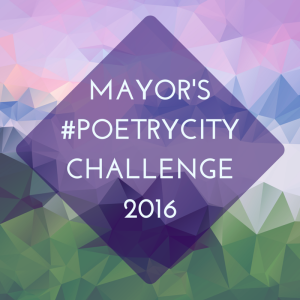 To celebrate National Poetry Month and UNESCO World Poetry Day, each year municipalities across Canada are challenged to bring poetry into politics. One mayor leads this annual challenge by inviting a poet to read at a council meeting in March or April, and challenges mayors and councils across the nation to follow suit and join the celebration. Initiated by Regina Mayor Pat Fiacco in 2012, the Mayor’s Poetry City Challenge celebrates poetry, writing, small presses and the contribution of poets and all writers to the rich cultural life in our country.

Last year the torch was passed from Regina to Calgary, and Mayor Nenshi’s first challenge was a huge success. With over seventy participants, the 2015 challenge was our largest yet—but we hope for even more in 2016! This year’s challenge is a collaboration between the League of Canadian Poets, The City of Calgary, and the Writers’ Guild of Alberta, with the support of Loft 112. Follow the League on Twitter, Facebook, and Instagram, and track the hashtag #PoetryCity to get involved!

Communities participating in the 2016 challenge will be added to this page as we receive their confirmation.