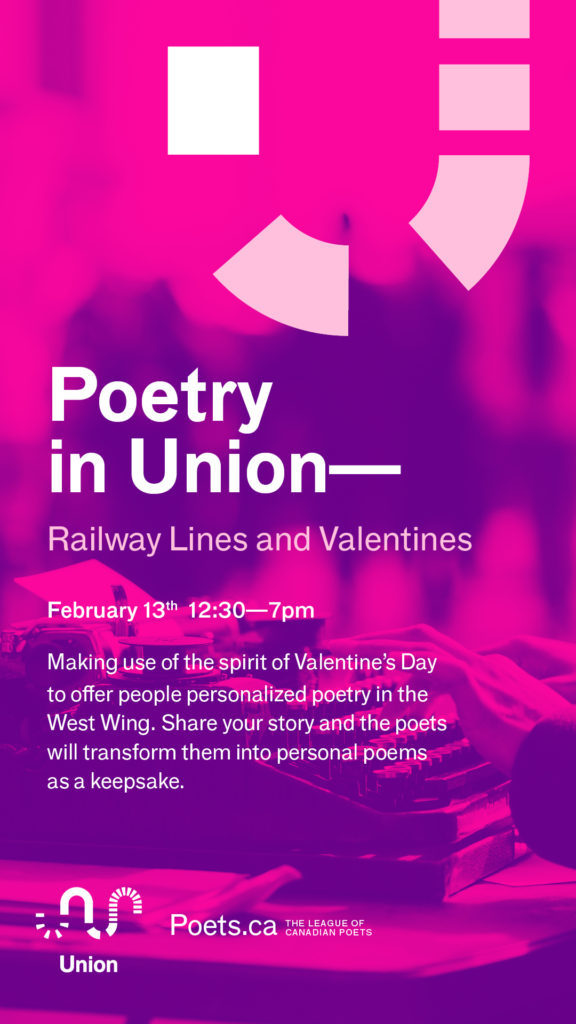 The League of Canadian Poets and Toronto’s Union Station are excited to present Poetry in Union: Railway Lines and Valentines, a public art experience.

At this event, seven of Toronto’s strongest, most diverse and most talented poets provided personalized poetry on request to reflect participants’ own experiences and stories. This was a unique opportunity to interact directly with an artist to create a romantic valentine’s gift, celebrate a friend, experience, or key moment.

This Valentine’s Day–themed interaction was the perfect way to add a touch of art, poetry, and romance to the daily lives of commuters and travelers in Toronto. In addition to original poetry, commuters had access to free treats and hot chocolate, romantic gifts, spoken word poetry performances and live piano.

More on this event

Dominique Bernier-Cormier was born in Quebec and grew up in Moscow, Paris, and Beijing. His poems have been shortlisted for the Montreal International Poetry Prize, ARC’s Poem of the Year Contest, CV2’s Young Buck Award, and the Frog Hollow Press Chapbook Award. His poem “Fabric” won The Fiddlehead’s Ralph Gustafson Prize for Best Poem in 2017. Correspondent (Goose Lane Editions, 2018) is his first book.

Ronna Bloom is the author of six books of poetry. Her most recent book, The More, (Pedlar Press, 2017) was longlisted for the 2018 City of Toronto Book Award. Her poetry has been recorded for the CNIB, translated into Spanish, Bengali, and Chinese and used in the work of filmmakers, doctors, academics, spiritual leaders, and architects. Ronna is currently Poet in Community at the University of Toronto and Poet in Residence at Sinai Health. Her Spontaneous Poetry Booths and RX for Poetry have appeared in hospital waiting rooms, bookstores, fundraisers and arts events in Canada and abroad. www.ronnabloom.com

Michael Fraser has been published in numerous national and international anthologies and journals including: Paris Atlantic, Arc, CV2, and The Caribbean Writer. He is published in the Best Canadian Poetry in English 2013, and 2018. He won Freefall’s 2014 and 2015 Poetry Contests. He won the 2016 CBC Poetry Prize. He won Exile’s 2018 Poetry Competition. His latest book is To Greet Yourself Arriving (Tightrope Books, 2016). He is the creator and former director of The Plasticine Poetry Series.

Suparna Ghosh has published three books of poetry – Sandalwood Thoughts, a collection of poems and drawings; Dots and Crosses, a prose poem with CD, and Occasionally, comprising free verse and ghazals. The ghazal, Intrusion, has been made into a CD and four musical videos. She has been published in local and international journals. Suparna was short-listed for the Montreal International Poetry Prize; her poem, Unlimited, was published in their Global Poetry Anthology. A grand prize winning poem was choreographed and staged in San Francisco. She has exhibited her paintings in Toronto, New York, San Francisco, Seoul, Mumbai, New Delhi.

Jessica Hiemstra is an award-winning multi-disciplinary artist. She lives in a little beige house, takes long walks, paints, illustrates and writes. Jessica has edited numerous anthologies of poetry, stories and essays, among them How to Expect What You’re Not Expecting: Stories of Pregnancy,Parenthood and Loss. She is the author of three full-length collections of poetry, most recently The Holy Nothing, with Pedlar Press (2016). Jessica is thrilled to be participating as a typewriter poet for the League and can’t wait to show people in Union Station a little (actually a lot of) love.

Rajinderpal S. Pal was named “Best Local Author” by the readers of Calgary’s Fast Forward magazine. He also won the Henry Kreisel Award for Best First Book for his critically-acclaimed poetry collection pappaji wrote poetry in a language i cannot read, which spent six weeks on the Calgary Herald bestseller list. He also has won the Calgary semi-finals of the CBC Radio Poetry-Face Of. Pulse has been nominated for both the Stephan G. Stephansson Award for Poetry (an Albert Book Award) and the W.O. Mitchell Book Prize from the City of Calgary.
.
Lara Bozabalian’s poetry and prose have been published in journals, magazines and newspapers, as well as in two literary anthologies. She is the author of four chapbooks, Exhale to December, The Morning Glories, New Dream and Free, and her first full length collection, The Cartographer’s Skin (Piquant Press, 2010). She has featured regularly at reading series around Ontario, including the Art Bar, Harbourfront, Ryerson University, the Luminato New Waves Festival, Eden Mills Writers Festival and the Words Aloud Festival.
.
SPIN El Poeta was born in Guatemala in the midst of a brutal 36 year war. Politicized by the
experience of becoming a refugee the day after his eleventh birthday. Raised with excellence by his mother. SPIN embarked on a journey to vindicate their suffering & learn his history and that of the country where his innocence was stolen by US foreign policies. To date SPIN has performed in 7 countries and over 20 cities including sovereign
indigenous territories in the north. SPIN has delivered arts education workshops to young offenders and over 1 000 students. He formed part of the first ever Canadian Hip Hop curriculum. SPIN is also the proprietor of ONE MIC EDUCATORS a social business designed to engage students and youth through Culturally Relevant & Responsive Pedagogy as well as Hip Hop as Critical Pedagogy.