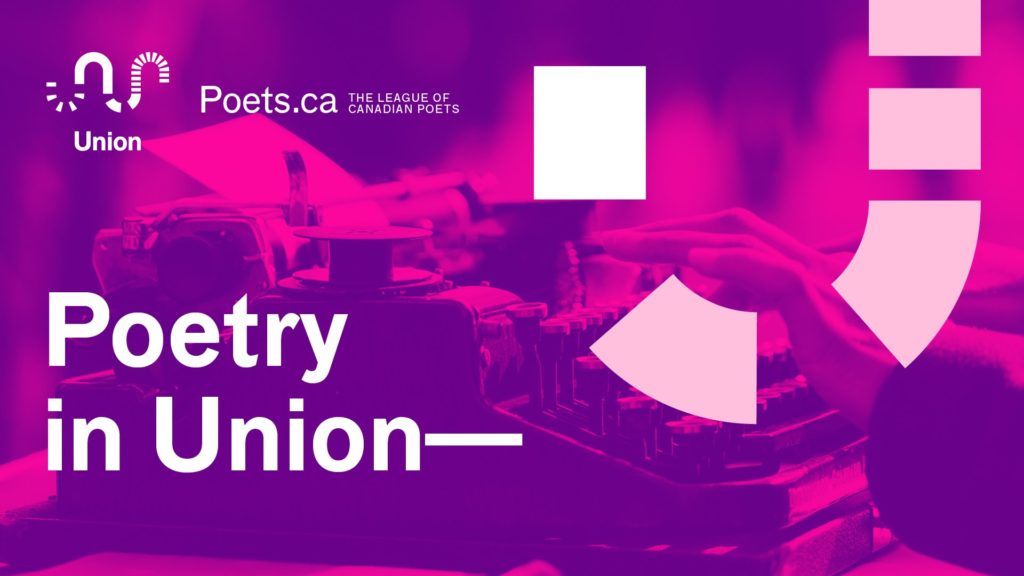 The League of Canadian Poets and Toronto’s Union Station are very proud to have presented Poetry in Union 2020, a public art experience.

At this event, a selection of Toronto’s strongest, most diverse and most talented poets provided personalized poetry on request to reflect participants’ own experiences and stories. This annual event provides a unique opportunity to interact directly with an artist to create a romantic valentine’s gift, celebrate a friend, experience, or key moment.

Introductions for our 2020 event were provided by Al Moritz, Toronto’s Poet Laureate.

Special thanks to Kate Marshall Flaherty and Ronna Bloom, who helped to organize Poetry in Union 2020!

Ronna Bloom is the author of six books of poetry. Her most recent book, The More, (Pedlar Press, 2017) was longlisted for the 2018 City of Toronto Book Award. Her poetry has been recorded for the CNIB, translated into Spanish, Bengali, and Chinese and used in the work of filmmakers, doctors, academics, spiritual leaders, and architects. Ronna is currently Poet in Community at the University of Toronto and Poet in Residence at Sinai Health. Her Spontaneous Poetry Booths and RX for Poetry have appeared in hospital waiting rooms, bookstores, fundraisers and arts events in Canada and abroad. www.ronnabloom.com\

Jacquie Buncel’s writing has been published in anthologies such as Outrage: Dykes and BIs Resist Homophobia and Countering the Myths: Lesbians Write about the Men in Their Lives and journals such as Atlantis: A Women’s Studies Journal, Contemporary Verse 2 and Poetica: Reflections of Jewish Thought. Her first book is a collection of poetry, entitled Turning the Corner at Dusk (Wolsak and Wynn, 2010). This book explores her parents’ stories as Holocaust survivors and her own experiences as a second generation of the Holocaust. She performed poetry readings from this book across Canada at synagogues, churches, schools, colleges, and universities. She studied creative writing for young adults at the Humber College Creative Writing program and has a B.A. (Honours) in English Literature from Queen’s University and a Master of Education from the Ontario Institute for Studies in Education of the University of Toronto. She is a member of the League of Canadian Poets and an associate member of CANSCAIP. She lives in Toronto with her partner and their two daughters. www.jacquiebuncel.ca

Domenico Capilongo is a Toronto high-school creative writing teacher and Karate instructor.  His first two books of poetry, I thought elvis was italian, hold the note and short fiction collection, Subtitles were shortlisted for several awards. His latest  book of poetry, send,  is about the way we communicate. His work has been featured in several national and international literary journals. He is almost finished a manuscript about words that were born in the 1970s. He also writes an interview series called Un Momento for italocanadese.com.

Dani Couture is the author of several collections of poetry and a novel. Couture’s work has been nominated for the Trillium Book Award for Poetry and Pat Lowther Memorial Award, received an honour of distinction from the Writers’ Trust of Canada’s, Dayne Ogilvie Prize for Emerging LGBTQ Writers, and won the ReLit Award for Poetry. Her latest book is Listen Before Transmit (Wolsak & Wynn 2018).

Sadiqa de Meijer is the author of Leaving Howe Island (Oolichan). Her poetry collection, The Outer Wards (Vehicule Press), and her book of essays on her first language, alfabet / alphabet (Palimpsest Press), are both forthcoming in 2020. She resides in Kingston, Ontario.

Puneet Dutt’s debut collection of poetry, The Better Monsters (Mansfield Press), was a Finalist for the 2018 Trillium Book Award For Poetry, was Shortlisted for the 2018 Raymond Souster Award and was named one of “Ontario’s Best Books” by NOW Magazine. Her chapbook, PTSD south beach (Grey Borders Books), was a Finalist for the Breitling Chapbook Prize. She holds a MA in English from Ryerson University, is the Editor-in-Chief of The Puritan Magazine, is an editorial board director at Canthius, and is a creative writing workshop facilitator with the Toronto Writers Collective. Dutt is an immigrant/settler and currently lives in Markham with her husband and son.

Maureen Hynes’s first book of poetry, Rough Skin, won the League of Canadian Poets’ Gerald Lampert Award for best first book of poetry by a Canadian. Her 2016 collection, The Poison Colour, was shortlisted in 2016 for both the Pat Lowther and Raymond Souster Awards. Maureen’s fifth book of poetry, Sotto Voce, comes out from Brick Books in fall, 2019. Her poetry has been included in over 25 anthologies, including twice in Best Canadian Poems in English, and in Best of the Best Canadian Poetry, 2017. Maureen is poetry editor for Our Times magazine. Maureenhynes.com

Lois Lorimer is a Toronto poet, actor and teacher who was born in Brockville, Ontario. Her poems appear in journals including: Arc, Literary Review of Canada, Hart House Review, as well as anthologies including The Bright Well (Leaf Press: 2012), Another Dysfunctional Cancer Poem Anthology (Mansfield Press: 2018) and Heartwood (2018). Her first collection is Stripmall Subver sive (Variety Crossing: 2012). Lois has a poem upcoming in Literary Review of Canada Jan/Feb 2020 and looks forward to writing poems for commuters at Poetry in Union!

Poet and fiction writer, Jim Nason is the author of six volumes of poetry, a short story collection, and three novels. He has been a finalist for the CBC Literary Award in both the fiction and poetry categories. His most recent poetry book Rooster, Dog, Crow was Shortlisted for the 2019 Raymond Souster Award, and his poems have been included in anthologies across the United States and Canada, including The Best Canadian Poetry in English 2008, 2010 and 2014. Jim is the founder and organizer of Canada’s annual human rights poetry event “Meet Me in the Middle: Writers on Rights.” “Damned if You Do,” is the title story from his new short fiction collection. Visit Jim’s website at www.jimnason.com

Andrea Thompson has been publishing and performing her work for over twenty-five years. In 1995 she was featured in the documentary, Slamnation and in 2005 her spoken word CD, One, was nominated for a Canadian Urban Music Award. She was the 2009 Canadian Festival of Spoken Word’s Poet of Honour, was host of the television series, Heart of a Poet, and is author of the novel Over Our Heads, the collection, Eating the Seed and the chapbook, Evidence. Thompson has written numerous critical essays on spoken word and is currently teaching through the University of Toronto’s continuing studies department, CAMH (Centre for Addiction and Mental Health) and Workman Arts. In 2019, she released her CD, Soulorations and later that year won the League of Canadian Poets’ Sheri-D Wilson Golden Beret Award for Excellence.

Susie Whelehan‘s face still hurts from smiling after the launch of her first collection of poetry, The Sky Laughs at Borders, published by Piquant Press, in October 2019. She is not complaining. Just reporting. Before this she wrote in many genres, including children’s television. Her poetry and essays have appeared in several Canadian and American journals and anthologies, The Globe & Mail, The Toronto Star,  and in her friends’ and family’s birthday cards. With Anne Laurel Carter, she co-edited the collection and contributed her memoir to My Wedding Dress: True-Life Tales of Lace, Laughter, Tears and Tulle, published by Knopf/Random House. That was great fun as well. With the publication of her poetry collection she became a full member of the League of Canadian Poets, is thrilled to be a part of “Poetry in Union”, and looks forward to this spreading across the country.

Read a recap of the 2019 Poetry in Union event here

Poetry in Union is the perfect way to add a touch of art, poetry, and romance to the daily lives of commuters and travelers in Toronto. In addition to original poetry, commuters will have access to free treats and hot chocolate, romantic gifts, spoken word poetry performances and live piano.

This event is based on the success of The Poet is In – an annual project that takes place at Grand Central Station in New York. You can find out more about The Poet is In here