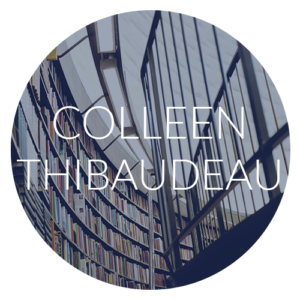 The League is honoured to recognize the contribution of member volunteers through the Colleen Thibaudeau Outstanding Contribution Award. Established in 2012, the award is offered annually to a League member in recognition of a substantial volunteer project or series of projects that nurture and support poets and poetry across Canada. This award was established in 2012 in memory of Colleen Thibaudeau (29 December 1925–6 February 2012), an Honorary Member and lifelong supporter of the League of Canadian poets, to show her support for the League, which was a source of friendship and recognition for her in her lifetime. Below is a complete list of recipients of the Colleen Thibaudeau Outstanding Contribution Award.

2016: Bruce Rice, for his invaluable efforts in establishing the now-annual Poetry City program and his longtime volunteer record with the League.

2015: Glen Sorestad, for his contribution to our annual Anne Szumigalski Lecture program and anthology, Measures of Astonishment, as well as his longtime volunteer record with the League.

2014: Allan Briesmaster, for his work in developing and executing the Poetry in Transit initiative, and his longtime volunteer record with the League.

2013: D.C. Reid, for his work in establishing the League Planned Giving and Bequests initiative, as well as his devotion to the League during his time as President.

2012: Wendy Morton, for her work in establishing Random Acts of Poetry, WestJet’s Poet of the Skies, and Chrysler’s Poet of the Road.