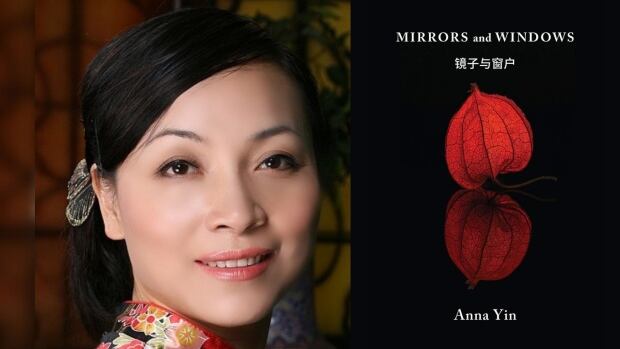 Very seldom these days do avid and adventurous readers come across a volume that meets both needs: the need “to delight and instruct” (Sir Philip Sidney’s requirements for poetry) as well as the modern collector’s joy in finding a book that is not only a pleasure in design and materials to hold in one’s hands but also a joy to read or simply page through. So many books being printed these days are hand-me-downs (poor materials, poor design, etc.) rather than hold-me-ups!

Mirrors and Windows is a great exception and a volume that is most handsomely edited, designed, and printed, the handiwork of Anna Yin who is very active on the Canadian poetry scene. She was the Ontario representative for the League of Canadian poets. She was a finalist for Canada’s Top 25 Canadian Immigrants Award in 2011 and in 2012. She is the author of five books and is the Inaugural Poet Laureate of Mississauga (2015-2017) which is part of the Greater Toronto area. I could go on listing more credits, but the subject of this appreciation is not Anna Yin herself but her first anthology, Mirrors and Windows.

The text is printed in a highly readable type face on high-quality book stock, more than 280 stark-white pages. The title is Mirrors and Windows in both English and Chinese, as is the subtitle “East-West Poems with Translations.” The byline reads “Translated, Compiled and Edited by Anna Yin.” As for the publisher, it is Guernica Editions … of Toronto, Chicago, Buffalo, Lancaster (U.K.), and the month and year of publication are October 2021. I received a review copy with no selling price indicated, so I am not aware of what is being charged for this volume, but even if the price is higher than that of the regular quality paperback, it’s worth the premium being requested.

The Contents covers seven pages in both languages. It begins with an essay “On Translating Poetry” by the multi-talented George Elliott Clarke and an essay “Why Mirrors and Windows?” by Anna Yin. Both essays are interesting and will be mentioned again below.

Part I is titled “From English to Chinese” and consists of texts in both languages of poems by Albert F. Moritz, Alice Major, Allan Briesmaster, Bruce Hunter, Bruce Meyer, and on and on, a total of 39 poets who are represented with a total of 60 texts. In point of fact there are 120 poems (in two languages) which seemingly represent Canada and “the U.S. and elsewhere.”

Part II is titled “From Chinese to English” for it consists of 20 Chinese poets generally represented with a poem apiece. Part III consists of “Poems inspired by translations” (seven of these) followed by biographies of all the poets and the translator and a list of acknowledgments. It takes a while to take in all of this wealth of words and ideograms!

Clarke writes sensitively about all the so-called languages that he has at his disposal, meaning the diction of an African-Canadian, African-American, with such “languages” as Canadian, Ebonics, Nova Scotian, “and even shards of French (an official language in Canada), plus the academic diction in which I’m steeped as a scholar …. ” Life is an amazing experience for Professor Clarke!

Anna Yin, for her part, refers to Maya Angelou and then expands on her observation: “‘I long, as does every human being, to be at home wherever I find myself.’ I hope this contribution will open more of these homes.” Obviously the mirrors and windows of the book’s title are those in “more of these homes.”

At this point the reader of this appreciation might expect the author of this review to settle down and “appreciate” the selections and the translations. That, of course, is impossible, as English-Chinese and Chinese-English translations require the ability to read the two languages. Lucky Anna Yin who can do that, and from what I assume, she has done it ably and well.

While I feel this publication is eminently worthwhile and that it could open windows if not doors in the future, I find myself wondering why the collection was not confined to the literatures of the two countries, Canada and China. Including a poem by a former Poet Laureate of Great Britain in the “From the U.S. and Elsewhere” section seems a little odd. Also including “tributes” written by Anna Yin in the process of devising translations to praise poets like Molly Peacock may seems a little peculiar (though it is rather pleasant and thoughtful).

If I have a criticism of the selections – set aside the translations for now – it is the absence of the aspects of Canadian life that really do interest foreign readers, presumably those who live in the world’s most populous country.

Where are the poems of the Inuit, the songs of the Indians, the heroic ballads from the North, the variety of landscapes, and the voices of the Québécois? They are nowhere to be found in these pages. It is an incidental matter perhaps, so rather than end this appreciation on a cavil, permit me to say that the volume at hand is a very welcome one and will reward many readers for many days of the week.

John Robert Colombo, one of the founders of the League of Canadian Poets, is known as “the Master Gatherer” for his compilations of works of Canadiana, including volumes devoted to Canadian songs, poems, myths, and legends. www.colombo.ca