in the luminous house 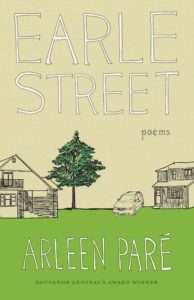 When you look out your window, what do you see? Are there trees? (how many?) Birds? (ever-fretting pigeons, circling the feet of passing pedestrians? Or are they predatory where you live—a turkey-vulture, perhaps, solitary, perched on some naked branch, craning his neck to better see what pulses with life below?) Maybe you see a hole dug out from the ground, around it an assembly of passive orange cones. Maybe you see a wall of brick.

The window is a frame, but by no means an enclosure. Arleen Paré, winner of the Governor General Literary Award and author of six books of poetry, confides in her reader that “this second-floor window that looks over the street scares me    a wasp tries to get in tries to get out    the wasp itself doesn’t scare me    but the wanting to be somewhere else    though scares may not be the right word    maybe the word is disorients    maybe I mean something like confines    wearies    maybe the word is entombs” (“Truth vs. Truth”). This ontological uncertainty leaves traces throughout the book, both by way of absent punctuation as well as in the rhetorical hesitancy that is characteristic of Elisabeth Bishop. The resulting effect engages the reader in a lively process of discovery and renewal, rarely closing a thought with a “.”, but instead leaving it propped open to further inquiry. It’s an invitation to come in, to see the particulars of another street from another window.

Earle Street is home to a large katsura tree, whom the speaker addresses throughout the book “as if” it was her lover. But she knows better than to confuse amour with metaphor: “I know nothing about you except what I see, what is written. So insufficient. The purple finches are also in love, as are the flickers and chickadees who make their days in your crown. I have let you root in my heart, knowing nothing of yours” ((Romantic) Metaphor III: Vulnerable but Already Dead). Is this not the image of true affection?— to let a person, a place, a thing, take root in your heart and not demand entitlement over theirs?

As philosophically contemplative and ontologically suggestive as Paré’s writing is, her distrust of parameters supports the urgency of its subject matter. In “This Land is a Language”, for example, Paré identifies ideological gaps that are mirrored in linguistic gaps between the English language and the languages of the Coast Salish peoples. Gaps, ideological or syntactical, may often constrain or impede mutual understanding. But gaps, too, provide space for light to enter:

gathering here on this page

this street    these rectangular and irregular verbs

vehicles    curbs    all within these unceded territories

the Songhees and Esquimalt Nations    the Lekwungen and W̱SÁNEĆ Peoples

the place where I am

despite discovering that the word

unceded does not appear in the dictionary I use

even though the word ceded appears on page 229

which should precede uncelebrated uncensored unceremonious

at the same time in a parallel universe

the notion of ceded land

does not arise in the Coast Salish languages

as if an arm or a foot

could be simply surrendered

The language of Earle Street is entirely Arleen Paré’s own. In this book life is breathed into nouns that have the capacity to live, while adjectives and adverbs walk away from their owners if only to prove that they can. Paré disrupts the fixity inherent in ideas of normativity by underscoring the very liminality that exists at the core of language. Here, cascading rain “quicksilvers the pavement, the trees”, streets are “canyoned”, and the katsura tree outside the speaker’s window has leaves that are small lungs. In a poem about preferring evening strolls around the neighbourhood over walks along the ocean’s rock edge, the speaker admits she likes the “orange rectangular glow… the silhouettes of women moving through rooms / amber-lit at the end of the day / more than the stars” (Natural vs. Natural). Again, parameters are invoked to challenge modern conceptions of what is natural—“nature” being a term only equaled in ambiguity and contention by “god.”

who consider this urban inclination unnatural

profane    as if humans in their own human lairs

are not natural too

As we learn from the poem “Passing Through”, the street, though singular, is not complete without yielding a passage. The particular route that led me to Earle Street was taken by chance. Never had I heard of Arleen Paré, nor was I in search of new poetry. I had just returned to Victoria after studying literature for the last three years at Concordia University, in Montreal, and was working fervently on a collaborative essay on Brazilian author Clarice Lispector. What impelled me to leave the kitchen table—for we hadn’t yet bought a desk—was the Complete Stories of Clarice Lispector, published by New Directions in 2015. However, once through the heavy doors of Munro’s Books, the arrows taped to the floor to ensure social distancing led me first to the wildlife section, then history, then, alas, the poetry section, where I couldn’t help but make a visit before moving to the wall of fiction where Clarice would be waiting. The title immediately caught my eye: Earle Street. I’d seen it, the street that is, recently on a walk around the neighbourhood. It wasn’t more than five blocks from my new address.

I hope a street in your neighbourhood will lead you here, too. The trees are magnificent.

Clayton Longstaff is a writer of poetry and prose living on unceded Lekwungen & W̱SÁNEĆ territory. In 2020, he graduated with an honours degree in English Literature from Concordia University, in Montreal. His work has appeared in publications including Soliloquies Anthology, Montreal Writes, Contemporary Verse 2, and elsewhere.