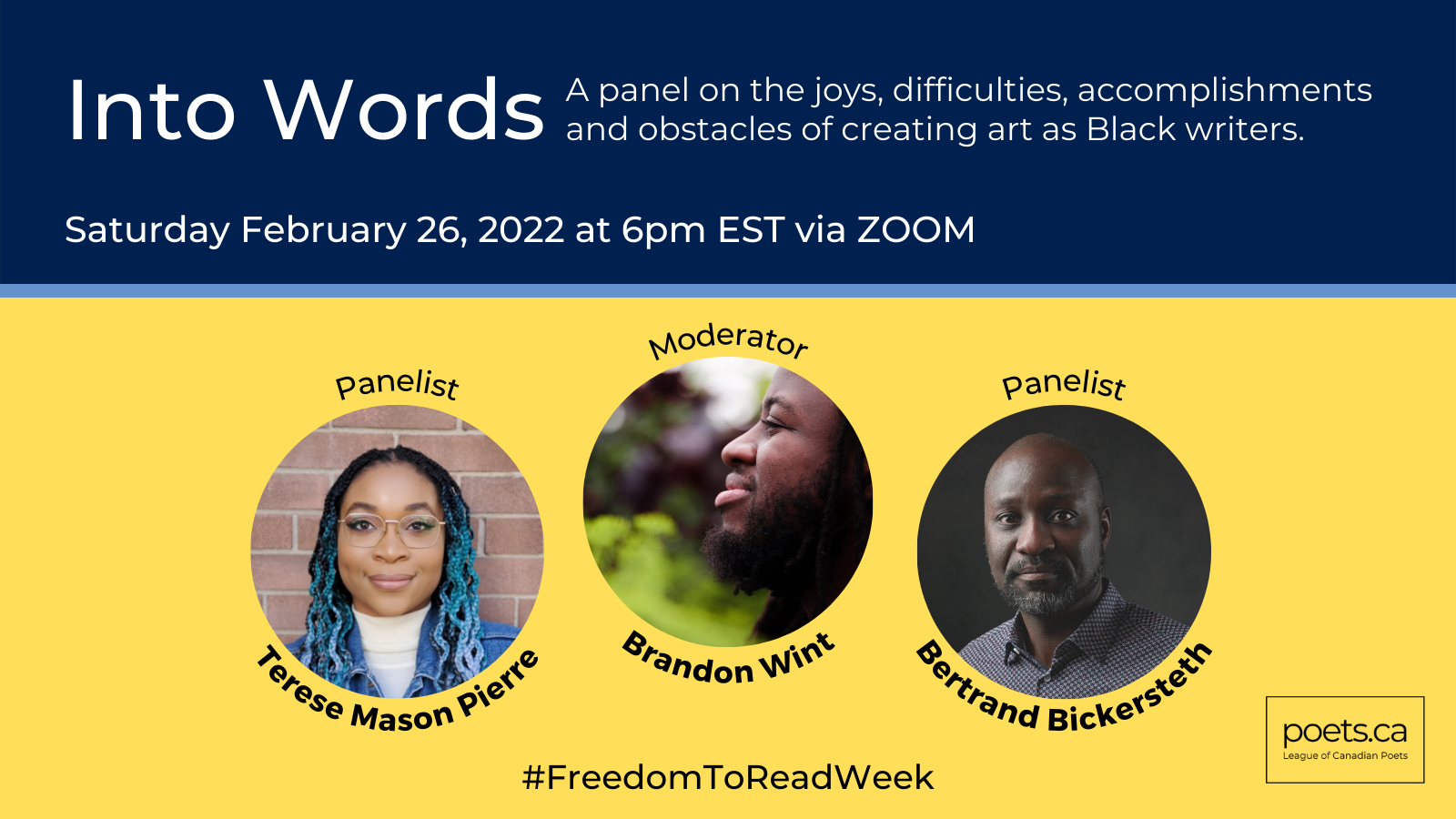 The LCP and Freedom to Read Week present:

Into Words: a discussion on identity in writing

A panel on the joys, difficulties, accomplishments and obstacles of creating art as Black writers.

With this event, we honor and celebrate the freedom to read, write, and share the rich and complex stories of Black writers in Canada. Our moderator Brandon Wint will lead writers through a discussion of how identity finds its way into writing, and how that transforms into what readers take from a poem, story, novel, or essay—and the various factors that can influence that transformation.

Brandon Wint is an Ontario born poet and spoken word artist who uses poetry to attend to the joy and devastation and inequity associated with this era of human and ecological history. For Brandon, the written and spoken word is a tool for examining and enacting his sense of justice, and imagining less violence futures for himself and the world he has inherited. For more than a decade, Brandon has been a sought-after, touring performer, and has presented his work in the United States, Australia, Lithuania, Latvia, and Jamaica. His poems and essays have been published in national anthologies, including The Great Black North: Contemporary African-Canadian Poetry (Frontenac House, 2013) and Black Writers Matter (University of Regina Press, 2019). Divine Animal is his debut book of poetry.

Bertrand Bickersteth is a poet, playwright, essayist and educator who was born in Sierra Leone and raised in Alberta. His collection of poetry, The Response of Weeds, was a finalist for multiple awards and won both the League of Canadian Poets’ Gerald Lampert Memorial Award and the Writers’ Guild of Alberta’s Stephan G. Stephansson Award for Poetry. His writing has appeared in many places including Geist, The Malahat Review, The Walrus, The Sprawl, and the CBC project Black on the Prairies. He lives in Calgary, teaches at Olds College, and writes about Black identity on the Prairies

Terese Mason Pierre is a writer and poet whose work has appeared in The Walrus, The Fiddlehead, Quill & Quire, Fantasy Magazine, and elsewhere online and in print. Her work has been nominated for the Elgin Award, the bpNichol Chapbook Award and Best of the Net. She is the co-editor-in-chief of Augur Magazine, a Canadian speculative literature journal, and she is the author of chapbooks, Surface Area (Anstruther Press, 2019) and Manifest (Gap Riot Press, 2020). Terese lives and works in Toronto.

About Freedom to Read Week