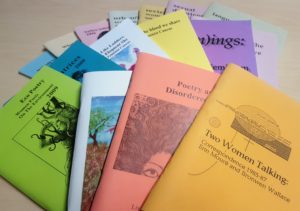 The League’s Feminist Caucus came to be as a result of a long article by Sharon Nelson published in the summer 1981 edition of the League newsletter: she examined the disparity in representation of men to women poets within the League, which brought many of the female members together to ultimately form a new committee—the Feminist Caucus.

The committee’s beginnings were fierce and controversial, with some members of the League even resigning over it, calling it a “disruptive” group and protesting the inclusion of a “special interest group” in the League. Some members called for the League to “disassociate” itself from the group, lest it appear the association was giving a “seal of approval” to the Caucus activities. Then-Executive Director Geraldine Gaskin wrote that that she was receiving letters suggesting she resign over her role in supporting the committee, accusing her of being a “radical feminist… deliberately trying to dissolve the League”.

But the Feminist Caucus persisted, with the support of its members and the administrative support of the League office—“I find it absolutely incomprehensible that people are actually taking me to task for doing my job!” wrote Gaskin in response to her accusers—and continues to this day.

On the tenth anniversary of the Caucus, they launched the Living Archives chapbook series, a collection of contributions to feminist thought, discussion of sexual politics, literary theory, and women’s history as experienced or shared in, during, and through the panels organized and sponsored by the Feminist Caucus at the League AGMs. Find out more about the Living Archives series here. 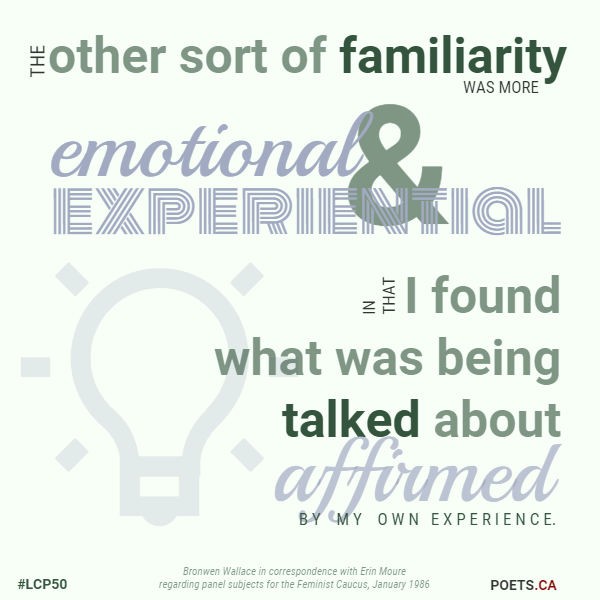 As we were going through our office library, we discovered the Living Archives chapbook Two Women Talking, a collection of correspondence between Erin Moure and Bronwen Wallace as they discussed panel ideas and content for the Feminist Caucus. We’ve loved reading through these snapshots of feminist history in the League, and we want to share some of our favourite snippets with you:

“My idea of course is to make visible feminist perspectives on poetry…and to let us all learn (by us I mean the women because I don’t feel at present like being responsible for men’s learning, but if they want to learn, too, the more the merrier) about each other, our diversity as women, the importance of that. I’m not into colouring things up swell and united and harmless to look good to the Big Boys, because A) **** the big boys, and B) doing that always ends up excluding some women, and I’d rather solidarity with women than with big boys.”

“I want all the women to go away inspired, and women who haven’t thought about feminism and women’s difference in writing since your panel a few years ago, or maybe they’ve never thought about it, will start thinking about it. And the men? I hope they get out of it whatever they can.”

“I’m supposed to talk about feminist poets for three ****ing hours, but I will mostly read women’s poems and talk as little as possible.”

“The other sort of familiarity was more emotional and experiential, in that I found what was being talked about affirmed by my own experience.”

“Let’s not kid ourselves. Language-centered writing can be just as easily co-opted by the patriarchy as any other kind.”