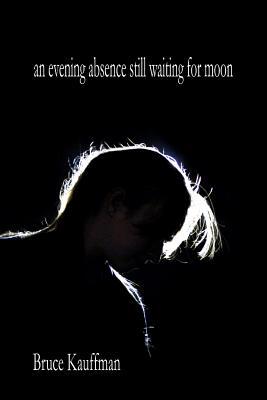 You know a book of poetry has possibilities when the opening epigraph is seven lines from W.S. Merwin’s ‘Ancient World’, which function as a kind of extended haiku, beginning, “Orange sunset/In the deep shell of summer” and ending with “…the sound of a door closing/And at once I am older”.

And it was “In the deep shell of summer” – July, 2019 – that I first read Bruce Kauffman’s book an evening absence still waiting for moon and liked it very much.

I sat in the carport facing the woods on a perfect day – temperature skin soft, enough breeze to blow away the mosquitoes – and was slowly pulled into the poet’s mind.

I made an afternoon of it, postponed walking the dog, weeding, watering; those summer tasks that seem so imperative and then, as the day settles into indolence, just slip away. Tomorrow. I would be practical tomorrow.

As I read I made little notes in the book – a check mark for a poem I liked, a star for one I really liked – and it is these I consult today, as I re-read the book.

Last summer as I read, a toad hopped near my shoes (which were new and which I’d been admiring, else I’d never have seen him), around behind my chair, and then, labouriously, up three or four logs high (I am not kidding) of the low woodpile that’s been settling in the carport for years (awaiting some electrical failure on a cold day), and came to rest near my right elbow, scarcely a foot away.

A mosquito floated by. I killed it and offered it to the toad, who was facing me, eyes closed, placing the squashed thing an inch or two from its mouth. Its mouth worked but it didn’t accept. The toad was asleep. I read aloud to it a few of the poems then, as I continued in silence, I found myself slowing, looking at the garden and woods between poems, and liking them (the poems) more and more. It was that kind of day.

A year later, we are all older, and I sit indoors today, not because it’s not another perfect day – it is – but I spent the morning doing the dog walking, the weeding, the watering and got rather hot. Today I will read the book again, sitting on the sofa, the sleeping dog’s gentle snore and the distant drone of the neighbour’s lawn mower my only audible accompaniments.

If I had to pick one word to describe Kauffman’s poetry, I think that word would be ‘tender.’ Writing in ‘last poem’ (of which all poets think), he finds two options: that it will be “when/the pen/runs out of ink” or “when/the last tree/is felled//and in the tears/of that time//nothing to write/no one to tell”.

That Kauffman appreciates tenderness can be seen in the poem ‘canada’ where he lists “a softer texture/a quieter voice/a more gentle heart”, positing that even our future fossils will be felt to be softer than those of our neighbours to the south. (He speaks as an expat.)

Another word I would use to describe these poems is ‘timeless.’ Kauffman tries to be both in and out of time simultaneously. In ‘insulation’ two men read their newspapers and discuss current events, “while a new morning/away from this/is spinning outside//already weaving itself/in the still colour and fullness/of what it is/becoming”.

And linking time and space (as one does), we find in ‘universes’ that the micro becomes the macro, as “a full single raindrop…is an ocean” “to a single almost invisible/wisp of dew”.

And how about this for a time concept; in ‘on learning’ we are challenged with the idea that we learn only “a single thing” and that that learning comes at the moment of death; and that at that moment, that information is sensed by the next generation being born; they are listening to it and then “softly whispering back/the first few words/of an echo heard”.

The third word that comes to mind as a descriptor after ‘tender’ and ‘timeless’ is ‘childlike’. Witness the end of ‘hollow tree’. The hole is “becoming/for me or/any other small child/a cave//a cave/before the lion comes”.

In ‘a café in time’ there are two stanzas which help explain the simplicity of Kauffman’s language. ‘i’ll leave creation/to the well-educated/the clever//i’ve already walked through/that country/and left it’. But this simplicity is deceptive. Read ‘within a day’, a two page poem which inexorably moves from macro to micro: “a lake…remembering even/its oldest memory/once but a droplet of water/arriving here//from/nowhere that it knew”. This is one of those poems where I can feel my heartrate slowing and my brain focusing, down, down.

There is much of the lyric in this book. In ‘divided time’, the poet marvels that as the sun sets here it rises elsewhere in similar colours “as if blackness had stolen/all the colours/from our evening sky//caressed them for an instant/between its palms/and then/in a gentle sweep/spread them with its fingers upon/that chalkboard’s other side”. Here are all the elements I have described: the tenderness, the chalkboard reminding us of school and childhood, and always time.

In ‘voice’ we are told that “it” speaks “in the softest/and oldest language//silence” but as to what the voice is saying, the poet leaves the poem completely open for the reader to decide for themselves.

I would be remiss if I didn’t draw your attention to the opening three lines of ‘origin’. “it is from the earth/that dirt within us/that all things grow” and to the ending of ‘a murder of crows’, after the poet has witnessed (as I have once only myself) a low overhead flight of hundreds of crows in autumn, “pulling behind them/the end of light/the end of day/the end of season/this almost end of year.”

And in the second to last poem ‘in the end’ Kauffman references the fourth poem in the book, ‘last poem’, as he tells us “i will have been/writing a single poem/for over seventy-five years”.

I finish my book. I stretch my legs. The toad is still sleeping.

Bruce Kauffman lives in Kingston and is a poet, editor, event promoter, spoken word radio show producer, and host of a monthly poetry open mic. In addition to other work, he has had 2 chapbooks and 3 collections of poetry published: The Texture of Days in Ash and Leaf, a seed within, and The Silence Before the Whisper Comes.

Born in Montreal and raised in Hudson, Quebec, Louise Carson studied music in Montreal and Toronto, played jazz piano, and sang in the chorus of the Canadian Opera Company. Her previous books include the literary mysteries The Cat Among Us and Executor, and the poetry collection A Clearing. Her poems have also been published coast to coast as well as in The Best Canadian Poetry 2013. She’s twice been short-listed in FreeFall Magazine ’s annual contest, and her poem “Plastic bucket” won a Manitoba Magazine Award for Prairie Fire. Louise has read her work in the Montreal area, Ottawa, Toronto, Saskatoon and New York City. She lives in rural Quebec, where she gardens, writes, and teaches music.