footsteps in the garden by Bob MacKenzie (cyberwit.net, 2021) 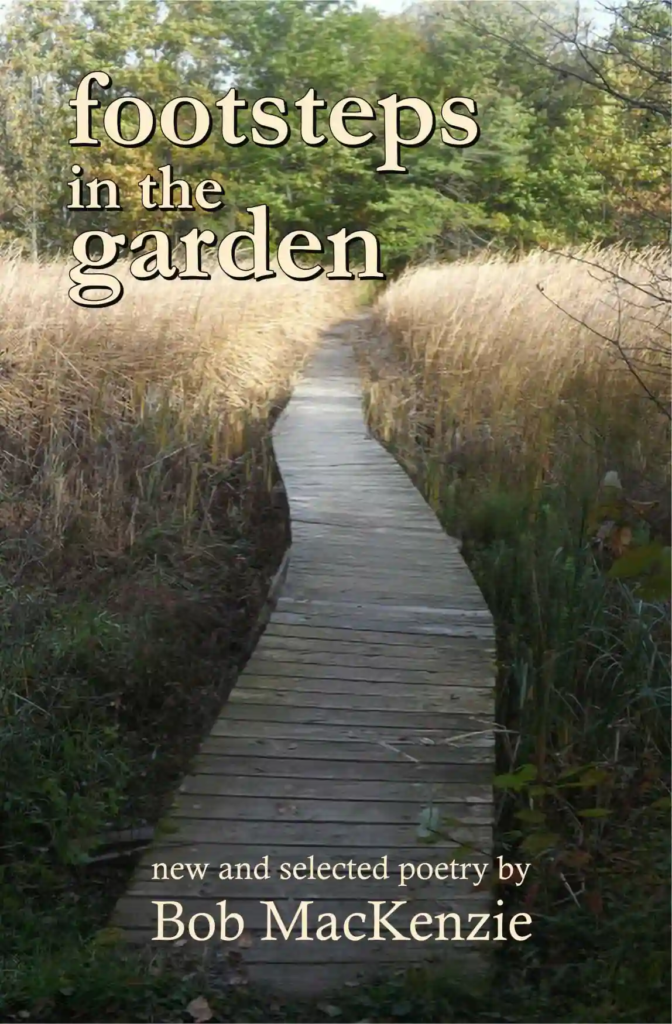 Bob MacKenzie’s latest collection of poetry, footsteps in the garden is for settling in. This is a collection that wants your time and attention for its spirographic dances with words in a plethora of gardens, both real and imagined.

MacKenzie’s gift with words is shadowy playfulness, scooping the reader into dreamscapes held in cages, and landscapes littered with wildlife above and below. Gracing gardens of biblical beginnings or blooming love in bedrooms, there is much to contemplate as Mackenzie weaves the reader in and out of spaces where:

Many poems take on the form of a wild-eyed, long sestina, with rich textures, heightened emotions and riveting rhythms. Readers are at once engulfed in dream-like stories pulling from the past, present and future musings that may or may not be lived by the writer himself, but that boldly take centre stage in his imagination. There is a very cyclical movement within the longer poems that connect us to life experiences both terrifying and exulting. It also feels like the writer is searching…diving into the “place” that poetry excavates as an exercise in exercising those shadow demons that seem to always be near, in spirit or in body or in boots or in bomb blasts.

Some pieces exemplify MacKenzie’s witnessing, and resulting story-building, whereby he, for example, sees a homeless person and weaves her backstory into view. He recycles and reuses words in slightly shifted sentences that gust new meanings yet remain connected. The poems are both laments and hopeful songs between different worlds with gardens of pain and sorrow or new and lasting love. We meander between lived place and dreams between personal history or imagined existences between childhood and adulthood, and beyond. All the while, there is a tallying of our steady imprisonments – fear, death, pain…and love. Reader’s can find a natural respite from the longer, shadow-driven pieces that settles into softer, shorter pieces like “portrait” and “some times of night.”

There is a sensitivity toward the place of the poet’s voice – if it is a container for our fears, for our sense of self, for our experiences internally and externally, can a poem bring us out of invisibility?

“…I am invisible; I am unheard; I am a prophet…” (pg.38, from “The Dark Shimmering Deep for all the prophets in rags”)

It is as though MacKenzie uses the “garden” as a container in which to express both the personal and the collective spaces between shadow and light. He extends his gardens into cities, buildings, cells, bedrooms, streets and more, giving an architectural ‘voice’ within a nature-driven “voice” of places where seeds can root or wither.

Between the long poems looping with sestina-esque playfulness, are short poems, sonnets, and lyrical pieces steeped in love. The entire collection, however, has an undertone of jazz. There is a definite and deep appreciation for the musical majesty of jazz, and it reveals itself in poems like “this is for the jazz” and “justice,” but the flow of the words, the rhythms and unpredictable yet fitting cadence and cross-rhythms mirror the vibe and eloquence of jazz music.

To conclude, footsteps in the garden is footsteps into MacKenzie’s own jazz-tastic, lyrical deep-dive into his shadows, and at its essence, the brightness of hope as the light discovers and embeds itself even the darkest spaces.

“…what dark shadows might threaten
the slender darts of the sun melt
or soften to nothing more dangerous
than the sodden leaves underfoot…” (pg. 114, from “the obelisk”)

footsteps in the garden is available in Canada from Indigo, direct from Cyberwit.net (the publisher), and from Amazon worldwide.

Canadian poet Bob MacKenzie grew up in a photo studio in mid-century rural Alberta with artist parents.  His father was a professional photographer and musician and his mother a photo technician, colourist, and painter.  Raised in this environment, he developed an affinity for photography, the intricacies of language, and an eclectic range of music.  Bob’s poetry has appeared in more than 400 journals across North America and as far away as Australia, Greece, India and Italy.  He has published seventeen volumes of poetry and prose-fiction and his work’s appeared in numerous anthologies.  His poetry has been translated into several languages, including Persian (Farsi), Greek, and Arabic.  Bob has received numerous local and international awards for his writing as well as an Ontario Arts Council grant for literature, a Canada Council Grant for performance, and a Fellowship to attend the Summer Literary Seminars in Tbilisi, Georgia.  With the ensemble Poem de Terre, for eighteen years Bob‘s poetry has been spoken and sung live with original music and the group has released six albums.