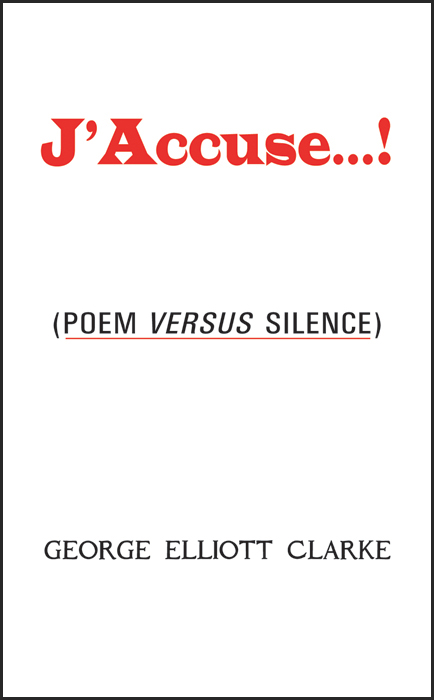 The title of George Elliott Clarke’s book length poem, J’Accuse…! (Poem versus Silence), is borrowed from Emile Zola’s 1898 letter “J’Accuse”, published in L’Aurore newspaper; Zola’s intention was to expose the injustice committed against Alfred Dreyfus, a young military officer wrongly convicted of treason and then deported to the infamous Devil’s Island in 1895. L’affaire Dreyfus and L’affaire Clarke share an injustice, one by the legal system, the other by today’s cancel culture, in both cases it is to be found guilty for something one didn’t do. Today’s punishment isn’t exile to Devil’s Island, it is be to be canceled and to have one’s career ruined. This book, then, is a defense and response to an injustice committed against George Elliott Clarke.

What accusations were brought against Clarke? It is that Clarke was friends with someone who had, with another man, beaten to death an Indigenous woman twenty-five years earlier; compounding the crime, the murderer (whose name I will not mention here) served only 3.5 years before being released, he then became anonymous, he changed his name and moved to Mexico. Clarke’s first “crime” for the cancel culture gang is that he knew and corresponded with, and even met, this individual. What Clarke’s accusers ignored is that Clarke knew nothing of this man’s history until he blurted out his confession to Clarke in September 2019, after 14 years of friendship gained under false pretenses.  Yet, simply knowing the ex-con was enough for “digilantes” (Clarke’s coinage) to find Clarke guilty of something egregious. Clarke’s second “crime” concerns a lecture he was asked to give regarding Murdered and Missing Indigenous Women and Girls at the University of Regina. Over this, there were zealous attacks on Clarke; one person even doubted that Clarke was part-Indigenous. Read the Tweets that condemn Clarke, some are hateful, including a letter someone wrote to the University of Regina protesting Clarke’s invitation to lecture at the university; a bookstore promised to remove Clarke’s books post haste from its shelves! Cancellation is a synonym for censorship. The protest against Clarke’s presence at the University of Regina was based on misinformation that Clarke was friends with someone who had murdered an Indigenous woman, and that Clarke’s lecture would include poems by this man. Clarke explained that since the proposed lecture had neither been researched nor written, how could he prejudge its content? Later he withdrew from the lecture, to try to avoid any further controversy. Plainly, it was McCarthyite guilt by association, guilt by lies, and ad hominem attacks that were being used to bring down George Elliott Clarke.

Clarke’s accusers included both biased reporters and the social media audience, people who are quick to anger and quick to assume a holier than thou attitude to opinions that differ from their own. The reporting of the case ignored that Clarke never knew the history of the murderer-turned-poet who wrote to him without introduction, who sent him poems, who befriended him, who talked poetry with him and presented himself as a poet in the Beat tradition, a faux Jack Kerouac/Gregory Corso/Allen Ginsberg kind of poet, someone Clarke met by chance at a Toronto book launch in 2005. In other words, Clarke’s kindness to an aspiring poet whose true history had been kept from him became ammo against him; he was condemned based on guilt by association. Indeed, Clarke writes that he was slandered and canceled for “allegedly caring more about Poetry and or Free Speech/ than I do about the Human Rights Emergency“; he writes,

To suggest that either Poetry (Rhetoric) or Civil Rights

must be cancelled to assert Solidarity

with any community of righteous Grievance

is to posit a blatant Tyranny.

Is it an exaggeration to compare l’affaire Dreyfus with l’affaire Clarke? On the surface, it would seem to be so until one considers the full effect of “Kancel Kulture” (Clarke’s phrase). No Devil’s Island for George Elliott Clarke, but a potential career ending social ostracism and excommunication awaited him. Some of the cancellers even believed that Clarke was as guilty as the murderer; Clarke writes, “… soon a headline billed G.E.C. as “the murderer”—/ swilling the drastic noun—spilling blood on my name. / (The Halifax Examiner / thus also articulated my spectacular Shame.)” For Clarke’s accusers, simply to be accused is to be found guilty and cancelled; indeed, for Clarke’s accusers, simply to disagree with them is reason to be cancelled.

If the seriousness of cancel culture is still questioned, I suggest reading Jon Ransom’s So You’ve Been Publically Shamed (2015); some of the cases of public shaming, cancellation, discussed in Ransom’s book might begin in a trivial way, a slip of the lip, a joke gone wrong, but events soon escalate to overwhelm the victim. No wonder few people in the public eye make extemporaneous statements, everything must be thought out, a misunderstood or misspoken comment may result in cancellation. The consequences of Clarke’s cancellation were potentially devastating and did, in fact, devastate Clarke’s life as long as they continued. Ransom quotes one of his interviewees:

“The justice system in the West has a lot of problems,” Poe said, “but at least there are      rules. You have basic rights as the accused. You have your day in court. You don’t have          any rights when you’re accused on the Internet. And the consequences are worse. It is       worldwide forever.”

And it’s not as though George Elliott Clarke is a minor or insignificant poet. Clarke is the author of acclaimed award-winning books including winning the Governor General’s Award for Poetry, he is a recipient of the Order of Canada, a professor at the University of Toronto, the 2017 Parliamentary Poet Laureate, and he has received at least eight honorary doctorate degrees; but his achievements and reputation meant nothing when it came time to attack someone who, the mob believed, transgressed their morality. Any residual goodwill one may think one has disappears in seconds as the cancellation gains momentum; the greater the victim’s achievements, the more zealous are the attacks against the victim.

Other poets have been censored, cancelled, including an attempted cancellation of George Bowering who, like George Elliott Clarke, is both a former Parliamentary Poet Laureate and a Governor General’s Award winning poet. Bowering’s No One (2018), published by ECW Press, almost didn’t make it past the woke ECW staff who claimed he objectified women and considered it their duty to cancel the book. Here is what Brian Fawcett writes on cancel culture in his essay, “Book Publishing, Bookselling, George Bowering, and the new censorship” (dooneyscafe.com, 22 April 2022);

It’s never been clear exactly what it was about No One that the ECW staff members          found objectionable or objectifying.  One of the several problems with what is now being      identified as “cancel culture” is that the cancellers appear to feel no obligation to provide detailed explanations of what upsets them and why it is upsetting. The emotions,    apparently, are proof by and of themselves, of authenticity: it is true because I feel it is       true. Without disputing the authenticity of their emotions, it’s difficult to have a rational   conversation about what other social and political issues and values might intercede or       countervail, and impossible to scale alternate values or, in some instances, individual and      social rights.

But let me praise this book as poetry; George Elliott Clarke’s J’Accuse…! (Poem versus Silence) is the major literary event of the last five years; the poetry is a combination of word play, word associations, vernacular English, double entendre, and always exhibits intelligence and indignation that justice and truth have been made subservient to false morality and mob justice, mob ignorance. Now you know how a person’s reputation can be destroyed or almost destroyed by a politically correct attack, a cancel culture attack, on that person. But George Elliott Clarke survived, as Cinna the Poet didn’t survive his attackers, as breaking the silence is an act of integrity and morality, and Clarke has written this impressive book.