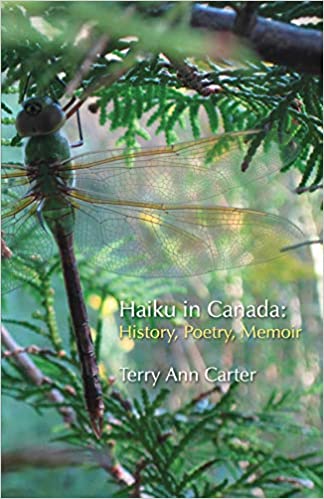 Rarely do books appear that embody a decade’s worth of dedication. And perhaps it is also true, that each book that is published represents that author’s whole life. Haiku in Canada does both: it is a book that encompasses a sweep of close to 120 years of history, alongside reflections by the author on her way of haiku over the past 20 years. As editor on this book, I shared the homestretch of preparation. Granted this is unusual for a reviewer, however I believe this allows me to share a unique perspective with readers.

What began as the topic of a conference presentation moved into a series of articles that were published in online journals. As an educator, the founder of two haiku groups, and past president of Haiku Canada, Terry Ann Carter was well placed to write this history book. She modeled the text on the writing style of “zuihitsu” or “assorted writing” made famous by Sei Shōnagon. This allowed her to weave together her “collection of papers, newsletters, journals, emails, personal notes, letters, books, chapbooks”using first person when writing of her journey, and third person when the material required a more formal tone.

The history begins in the early 1900s when Japanese immigrants on the west coast of Canada established poetry circles. Although the origins of these first groups are obscure, their poetry does appear in the Japanese-language newspapers of the time. During the Second World War, all persons of Japanese descent were relocated to internment camps in the interior of British Columbia. Haiku circles were formed to help normalize the conditions of extremity, and this poignant haiku by Kaoru Ikeda appears in translation in the book Stone Voices (1).

the right job for an old one

In the 1960s, lyric poets turned to haiku with the increasing influence of Asian culture. And it was in 1977 that the Haiku Society of Canada (now known as Haiku Canada) was formed: Terry Ann weaves together excerpts and haiku from the early pioneers of English-language haiku up to the current avante-garde. As well, she devotes a chapter of the book to the poets of French-language haiku (with translations).

During the last six months of preparation, I know that the manuscript doubled in size:  the book features 185 poets, and close to 400 haiku. There are 17 pages of references for which any future historian will be grateful. Charles Trumbull, former President of the Haiku Society of America, stated that “Haiku in Canada is must-read for everyone interested in the evolution of North American haiku” (2). I will close with this haiku by Anna Vakar (3), for my intention is to share the seeds of haiku by Canadian poets with a much wider audience.

I was about to plant them

when the wind blew

Poet and paper artist Terry Ann Carter (Victoria, BC) is the author of six collections of long form poetry, two haiku guidebooks, and five haiku chapbooks; she has edited four haiku anthologies. As past president of Haiku Canada, founder of and facilitator for KaDo Ottawa (2001-2012) and Haiku Arbutus Victoria Study Group (2014-present), she has given hundreds of haiku and book arts workshops around the world.

Philomene Kocher (Kingston, ON) is a poet and photographer, and was copy editor for Haiku in Canada. Her first collection, Singing in the Silo, was published in 2014, and her second book of haiku is forthcoming. She served on the executive of Haiku Canada for 12 years, and her poetry has appeared internationally.