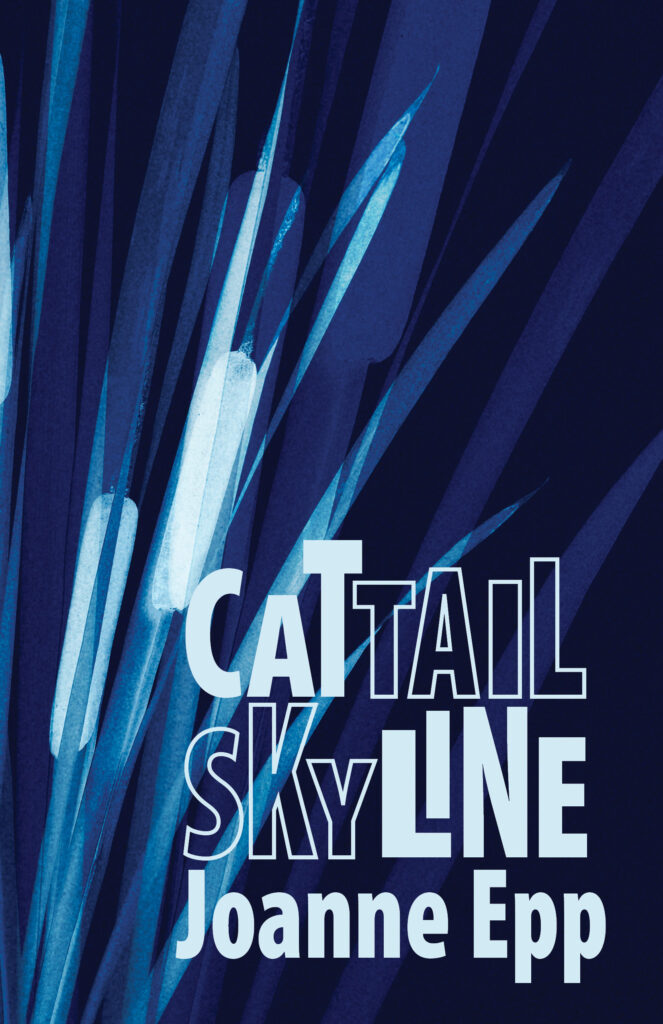 Joanne Epp’s Cattail Skyline (Turnstone Press, 2021) is her second poetry collection. The book is an attentive and intimate poetic treatment of the Canadian prairie landscape. Her poems are immediate and mindful and often steeped in a sense of nostalgia. Though some of the work deals with other locales, it is the prairies that call out most strongly. Many of the book’s pages are populated with up-close looks at the intricacies of berries and wildflowers. The poet also takes time to make broader comments and investigations of the wider world, thinking about these important spaces and landscapes in relation to their social and historical contexts.

Across the collection, strong, vivid imagery stands out, especially in the realm of the visual. Pieces like “Star Lake” are worked in a painterly way. Landscapes and scenes bristle with the feel of brushstrokes and vibrant colour, and so explicitly in “Equinox” as “Summer empties its paint pots/A drip here, a splash there: vermillion.” Other poems take on a cinematic quality. “Park Valley” features the speaker and her choir performing in a church to its few unaffected parishioners, who sit almost motionless in a blend of apathy and inertia.

Other poems, many in fact, are deeply mindful, like “Wild Strawberries,” evoking a sense of wonder, of awe, of the ordinary-made-extraordinary by attending fully to the minutiae of prairie fruits and flora. Several of the pieces, the berry poems, bring to mind texts like Seamus Heaney’s “Blackberry Picking” and Alden Nowlan’s “Picking Raspberries,” along with many other works of poets who have played in the trope of berry picking verse. In “Saskatoon berries,” the literal fruit of remembering becomes visceral and sensorial with a “mouthful of sweet purple/juice on the tongue.”

The book itself is divided thematically into several sections. The “cemetery road” prose poems, serial pieces, appear throughout the collection and act as stopping points. They standout for their steadfast attention to place. After encountering them again and again, it seems like a poet’s perseveration, scenes of detail and beauty, often focussing on anything but the fact of the purpose of the cemetery itself. Similarly, the “Omand Creek” poems, a monthly sequence, play with mood. The poet-speaker’s eye (or “I”) shifts in relation to flipping from one calendar page to the next. Each month comes with its own response, its own thematic focus. In July’s piece, “Come closer,” with its “yarrow canopies; milkweed stars,” the speaker revels in the details, asks “Why return to the path?” Epp stays clear of “pathetic fallacy,” of the land speaking or carrying some type of human emotion. What is important is within the frame of the poet’s looking.

Across the collection there is, of course, this personal, individual self speaking. There is also the self of a wider consideration, a self looking out at the larger world. In this mode, these poems, gentle in tone, rove with a critical eye over settler-colonial legacy and whiteness. Several pieces explore these political and social connections to land. Places of significance to the speaker are “revisited.” The poem “Bearings” is a reading of the political geography, of map and landscape. The speaker examines pages of the “Atlas of Saskatchewan” aware of the superimposition of its colonial features — a witness to the act of near-erasure. The poem describes areas inhabited by various ethnic-religious settler groups which are colour-coded vibrantly, but, as the poet writes, “…[f]or ‘Indian Reserves,’ the palest almost-pink./Against the surrounding colours, it almost disappears.” Another poem, “Gabriel’s Crossing,” references the historical Métis leader Gabriel Dumont and the narrative of the Red River resistance in juxtaposition to the school-taught history of Canadian colonial identity and its dominant, over-written narratives.

The subject of travel is also looked at, travel by train across Canada as well as travel to Cambodia. In “Vesak Day in Tram Kak,” the evident otherness of the speaker is recorded, along with the objective observances and descriptions made from a speaker who is outside of the culture. This experience of otherness is characterized by the speaker as “…the great joke/of my being here, winter-pale,/not understanding a word.” In these travel poems, as with the collection as a whole, place and small detail are upheld as the common thread of the speaker’s attention.

Ultimately, where the collection finds most of its energy is in signing of the prairies.  With Canadian poets, place and landscape is traditionally and often a muse, even a character. This collection does partake in that tradition, with a pastoral emphasis, with a pull toward description, but also moves far beyond that. The beauty of place, with its fraught social histories, is attended to with the poet’s careful and painterly eye. A reader might think of this volume alongside Tom Lilburn’s “To the River.” Though with very different musics and registers, both books share an equivalent level of devotion and attentiveness to the prairie-scape. Addressed in an unassuming way, to a friend, to an intimate listener, these poems are a quiet reminder of how poets are often deeply linked to the places they inhabit. This book, with Epp’s signature, investigates this relationship with an artistry and a desire for the reader to come close and to revisit and remember.

Born and raised in Saskatchewan, Joanne Epp has published poetry in literary journals including The New Quarterly, The Antigonish Review, and CV2. Her chapbook, Crossings, was released in 2012. Eigenheim is her first full-length poetry collection. Married with two sons, she spent several years in Ontario and now makes her home in Winnipeg.

Michael Edwards is a writer living in Vancouver, BC on traditional, unceded territory of the Musqueam people. A graduate of The Writer’s Studio Online at SFU, his poems and prose have been published in various online journals. He is also the editor of Red Alder Review, an online publication focused on building connections between writers and the wider community. Blog: michaelwriter.home.blog // Twitter: @michaelwrites1