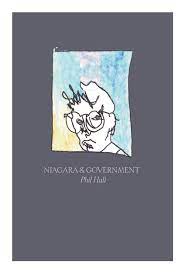 “I have compounded another thingamajig,” exclaims Phil Hall partway through his recent collection, Niagara & Government (Pedlar Press, 2020). The thingamajig in question is a scavenged toy compass that Hall has fit inside a bottle cap, to his great satisfaction. But it also stands in for Hall’s overall approach to writing: Niagara & Government is a display case for Hall’s poetics of assemblage, by which he brings together unexpected parts to create vivid, witty, and confessional word art.

Hall tinkers with various units of assemblage, including words (“tear-kettle,” “Miróbinchy,” “birdsmithy”), verses (“the line with no hook is my fish”; “you cannot   dry me out of    my song”  ), and entire poems linked in long sequences, such as the affecting, 22-poem “Bottom.” This is where he describes the compass-slash-bottle cap, but “Bottom” also connects disparate ideas about age, addiction, self-reflection, and invention.

He then surrounds his makings with plenty of tabbed white spaces, hanging stanzas on pages as if on gallery walls. Here are stanzas 1 and 2 of “Bottom,” poem 4:

Hummingbird  as a name

or Drink   for short

one quick open syllable each

Sometimes Hall seems to nod in approval at such works. In poems like “The Prodigal,” he deems his assemblages honest craft in a landscape of poetic falsity: “my poems resist     being of     anything non-visceral”.

Much like in his 2011 Governor General’s Award winning Killdeer (BookThug), in which Hall traced his lineage in Canadian poetry partly through forceful rejection of what he doesn’t write, in Niagara & Government he explicitly values his style over “typey typey” or subject-driven “ego blab” written by formally trained poets, as he notes in “Fabergé & Pelt”:

Other times, Hall assumes the posture of harsh critic, deriding his own prolific output: “I said too much    too proudly    too soon,” he scoffs in “A New Book”; then, in “Failure,” threatens to chuck everything out:  “I should print out my new book // scatter its pages in the maple bush    & let it go at that”. For Hall, in that metaphorical bush, poetry gets overwrought:

that unboiled calligraphy        I keep trying for

Still elsewhere, Hall appears resigned to his technique of assemblage as medicine or daily ablution. Fitting ideas together becomes part of a larger strategy to reassemble himself in recovery from addiction, as proposed in poem 18 of “Bottom”:

But Niagara & Government exceeds these judgements. This work is neither superior, nor syrupy, nor even salve. Words and ideas may join at odd angles, but as Hall argues in “Local Produce”: “if it is understandable, it is not true to life.” Hall’s thingamajigs, then, give rise to mystery; assemblages are curious machines carrying forward not Hall’s perfected voice, but his very life.

Much of Niagara & Government centres on Hall’s lifelong ache for self-expression, which was unwelcome in his family of origin, taken as evidence of highfalutin self-regard, as he recounts in “Screen & Costume”:

Silencing was perhaps the ultimate trauma of Hall’s formative years. To survive, he cut ties with family. This break hinged on his ability to write into existence a new literary lineage: “the next word has // my true ancestors in it” (“Bottom,” poem 10). Poetry’s magic machines give him the power to decide what and who is real.

In this regard, the collection’s title, Niagara & Government (an intersection in Victoria, BC) suggests itself as Hall’s most potent thingamajig yet. With it, he heralds two allusions: to the untameable overflow of Niagara Falls—here, Hall’s urge for artistic life—and the wish for poetry to govern provenance, trauma, self, and CanLit’s weaker links.