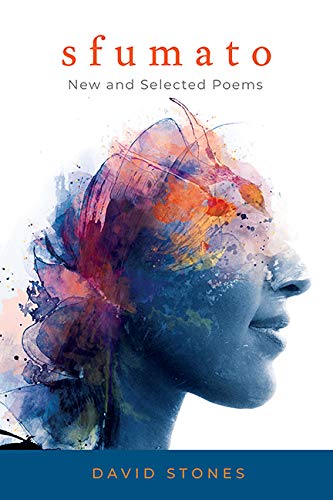 In the book sfumato, the poet David Stones, writes poems that are very powerful and precise, reflecting on things that are often unnoticed. Each poem is a masterpiece so thought provoking  and an in-depth study of life’s, happy as well as tragic situations.

These poems reveal a certain mystery and have a magnetic pull that attracts the reader towards each stanza and word in order to inform, engage as well as entertain.

Writing is no doubt, a solitary experience but in these poems it is a rich and unforgettable sharing of thoughts with the reader…a kind of revelation and a deep insight into what we see.

The poet sees what we cannot see. Poems that deal with simple topics such as Black Box; the hat; empty page and nails, suddenly assume a sfumato-like weave and a deeper meaning. The poet’s acute sense of observation makes the reader literally feel the cold, raw silence of falling snow as he skillfully transfers tis to nostalgic memories of the past.

In the poem,”the poem itself” the poet says,

the idea become the poem itself.

In the poem, “The cigarette,” the image of a burning cigarette as being a “lazy little fuse,” and a “ragged cylinder of ash,” is indeed very striking and makes the reader ponder awhile.

The poem “tea leaves” is a topic so simple, yet it becomes a very thought provoking poem tinged with nostalgia.

and ‘even now that kiss persists’

,’I seem to have acquired

none of these abilities.

And further, he adds,

of who I am

and all the small

A perfect ending of this poem

The poet interprets ‘Sleep’ as

sleep drifts into me

just the way they say

of moments into themselves.

Not only are the words so beautifully chosen, but also take the reader to a new level of thought.

The poems in this book explore the evolving self to reveal deeper mysteries that are very poignant and rich in thought.

Poet and writer from Vancouver Island– Kamal Parmar has been passionately involved in writing since high school and University years. Her genre is poetry and creative non-fiction. Her poems are simple, though poised and evocative enough to set the reader thinking. She has a few books published in UK, Canada and India and many publications in reputed US and Canadian literary journals and anthologies. Her writings have won many honourable mentions and prizes. Kamal has been a member of a several writers’ organizations and Writers’ Guilds. She was an active member of Saskatchewan Writers Guild, for many years and also a voluntary peer reviewer with many Writers organization. Currently, she is an Associate member of the League of Canadian Poets and a Board member of the Federation of BC writers. She is also a member of Haiku Canada, of Canadian Authors Association and of The Writers Union of Canada with whom she is a voluntary peer reviewer, screening poetry manuscripts of self-published writers. –She is the current Poet Laureate of Nanaimo (2021-2023).

David Stones is an award-winning poet, performer, ex-CEO and business leader, guitar enthusiast and self-confessed bon vivant. With poems hailed for their resolute imagery, beauty of language and ready accessibility, David is a celebrated performer of his work. He transformed his debut collection of poetry, Infinite Sequels (Friesen Press, 2013), into a one-man show of the same name (“a brilliant and beautiful piece of theatre” – London Free Press, 2018). The winner of multiple poetry contests and judge’s choice awards, David’s poetry spews forth from presses both in Canada and internationally, including most recently Synaeresis (Harmonia Press), Big Pond Rumours, Beret Day Books, Authors’ Press (India), Hidden Book Press, Skywing Press and Her Royal Majesty (Paris, France). David lives peripatetically between Toronto and Stratford, Ontario. His latest poetry collection, sfumato, is published by Blue Moon Publishers.