The Green Archetypal Field of Poetry: on poetry, poets and psyche by Stephen Morrissey, Ekstasis Editions, 2022 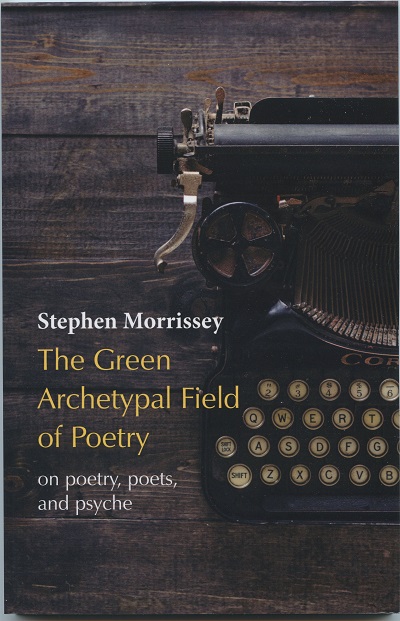 In The Green Archetypal Field of Poetry: on poetry, poets and psyche, Montreal poet Stephen Morrissey draws upon and revisits a lifetime of creative and critical writing.

A member of Montreal’s “Vehicule Poets” in the 1970s and the author of nine published books of poetry, in his new book Morrissey traces the evolution of, and influences on, Canadian modern poetry with a focus on the “Montreal Group” and the “Vehicule” poets.  A complement to his previous book A Poet’s Journey: on poetry and what it means to be a poet (2019), The Green Archetypal Field functions as a master class on poetry and poetics.

Why have once prominent and critically praised Canadian poets such as A.J.M. Smith fallen into obscurity? he asks. What happens when a country loses its collective memory?  Should the definition of what constitutes a “major poet” be focused less on the volume and more on the quality of the work – particularly in the case of exceptional poets who may, for one reason or another, have produced a limited number of poems?

Morrissey reflects on a time when older, established poets such as Irving Layton, F.R. Scott and Louis Dudek mentored and nurtured younger poets: “The older poets in Montreal created an environment in which to be a poet was a possibility, not something alien and foreign,” he writes.  “We didn’t have to look to England or the United States for what it meant to be a poet.  Established poets lived among us, we saw them on the streets where we lived, we read their poems in school, and we read reviews of their books published in local newspapers.”

Louis Dudek, for example, was not only Morrissey’s teacher when the latter was a graduate student at McGill, he was also a mentor and a friend. “He made me feel that the life of a poet was the only one worth living,” Morrissey recalls.  He writes movingly of the great importance to him of a meeting he had with Dudek in 1975:

“He read some of my poems, which he liked very much.  He gave me something that afternoon that only an older poet can give to a younger poet: he gave me confirmation that I was a poet.  I left that meeting feeling that I had nothing to worry about, just keep writing and my life as a poet would unfold.  And that’s what I did.”  (Dudek went on to write the introduction to Morrissey’s first book of poetry, The Trees of Knowing, in 1978).

In The Green Archetypal Field, Stephen Morrissey traces the origin of his becoming a poet back to the single most significant event of his life – the death of his father (following unsuccessful heart surgery in Boston), when Morrisey was six years old.  Suddenly thrust into the role of a “latchkey child” in a single-parent household in which his father was never mentioned, Morrissey’s profound grief and loss went unaddressed, and was therefore unabated.

“For some of us there is a single moment when our lives changed radically, when life is reconfigured,” he writes in a chapter entitled The Great Reconfiguration. “Life is one thing, and then, a moment later it is something else… Almost every aspect – I believe every aspect – of my existence was changed into something other than what it had been only seconds before my father’s death.”

Forced at a young age to confront the “impermanence and insecurity” of life, it was only as a result of beginning to write poetry in his teens that Morrissey found a way of both processing and articulating his unresolved grief and trauma.  Although he didn’t know it at the time, the course of his future life as a poet had been set.  Poetry, he points out, is a calling. “No real poet ever decided to be a poet, it doesn’t work that way.”

Morrissey’s calling to write ‘confessional poetry’ specifically, was bolstered as a result of reading an interview with the American poet Allan Ginsberg, which was published in The Montreal Star in 1967.  “Scribble down your nakedness,” Ginsberg advised. “Be prepared to stand naked, because most often it is this nakedness that the reader finds most interesting.”

Although writing confessional poetry often necessitates what Morrissey calls “a journey into darkness”, he believes that “if the poet has the courage, it is also a place of great creativity, of revealing what has been hidden or disguised… [of] meeting one’s shadow, the rejected and dark aspect of our inner being; it is a journey to selfhood.”  Ideally, that journey will lead towards “wholeness.”

Central to his life and his work is Stephen Morrissey’s sense of himself as a Montreal poet – as opposed to a poet from any other place.

“Poetry returns us to place; poetry explores place, it extols the humanity of place over the anonymity of the contemporary and soulless built environment,” he writes. “Without identifying with a specific place there is a levelling off and diminishment of what makes us human; there is the emergence, as we see in the world today, of a dehumanized global society.”

Fifty years of reading, thinking about, and writing poetry have convinced Stephen Morrissey that “We go to poetry with nothing to say, or we go to poetry with something to say that is not necessarily what we end up saying, but in either case we find our voice, we find an authentic expression of what the soul wants to say, and this is poetry.”

About the reviewer:  A native of Montreal, Cynthia Coristine currently lives in Ottawa.  She is the co-author, with Ian Browness, of From Griffintown to the Square Mile: The Life James Coristine (2009).