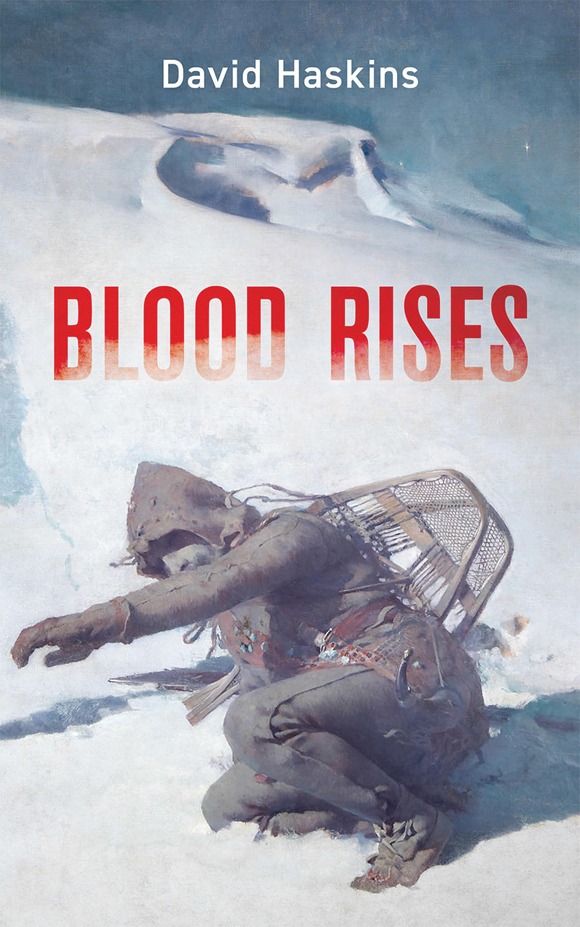 At the breathless top of the world along the arduous Inka trail, “Condor, oldest of all flying creatures” brought the sun on his back to banish darkness and fear. David Haskins’ transforming late life ascent into Machu Picchu takes us to where “[t]he Word was nothing.” Embracing the poetry of an ancient people in their dazzling creation myth, Haskins takes the unspoken “Word” and follows “the something that came from that,” towards “Word spoken” (“Prologue”). Although it is the final section of his collection, Blood Rises, Haskins’ arduous trek provides an initiation into his own telling of light and dark, love and loss. In this collection Haskins explores divorce, cancer, the ecologically fragile state of the world and a 20th century Canadian writing community profligate with talent.

The larger journey Haskins takes is imaged in a gruelling climb to the Andean summit, the ultimate physical test. “Nine hours a day gasping rarefied air,” Haskins winds along Inka roads that “thread the Andes…like khipu strings knotted with secrets of Empire/ that Spanish rosaries could never untangle (“Inka Trail”). Khipu is an ancient writing system reputedly used by the Incas to communicate accounts as readily as memories. Opening this grouping of poems is a photograph of the Intihuatana, the prism stone at Machu Picchu positioned to harness the sun. Animating Andean mythology, this dazzling depiction of life’s core also highlights the emotional intensity that drives this volume.

The voice is sure of itself, fearless and steadfast in its own perceptions,  going where it must, finding accurate unfussy language and many apt metaphors for complicated states of being.

Titles of sections – quirky and apt – are italicized for both emphasis and irony. In the wild among us, the gulls of “November,” wheel in from the lake “curious to know how we endure shut in our boxes/ without going crazy.” Finding no fish in the garden, they adapt to “the provident drizzle, the empty sky.” Haskins pays attention to life where it happens, seeing clearly what is before him. With the precision of haiku, he highlights Muskoka moments: “drowned deadheads and softball lilies,” or “a speedboat, racing into rumour.” He tosses sights and sounds aloft in clear images that deftly touch and go (“Loon”). He gives us the world of stones in exact, wry couplets generally reinforcing the vivid existence of wilderness where we live, along with our responsibility to acknowledge and care for it.

Haskins’ fervent embrace of the natural world co-exists with his fury at how we are destroying it. The delicate, complicated relationship between the day of a sister’s death and a brightly hovering butterfly threads back though memory to a boy who learns “you must kill beauty to keep it” (“Forgiven”). The casual cruelties of childhood morph into the inevitable destruction of a planet. In “Urban Fox,” an iconic creature with her fabled history of the hunt and the fur collar suffers habitat loss to become a “scavenger of human refuse.” Her future becomes a self-destructive gnawing towards freedom. She will bleed out in a trap along with her cunning, and “the mysterious sisterhood of fox.”

Haskins’ maverick, sometimes ornery voice hurls sardonic rage at the killing of a lake or of a magnificent doe, “[t]he severed head borne aloft on a shield of pine/ all so your children will know who’s boss” (“The Fall Kill”). Moments of overstatement and unnecessary explanation in the book are characteristically redeemed by an unflinching integrity of delivery.

“Resilience,” dedicated to the Haida painter, Robert Davidson asks “How do you paint the Southeast wind/ that blows the pox into every eye?” But that also “moves the line” and “lifts the…whale” making you human? Through the elemental imagery of a natural force essential to the whale hunt, this poem whispers on the wind the splendour of a society, highlighting its cultural glory, in this “numinous beast,” a “spirit creature breach[ing] from a crack in the past.” Briefly at the end of the piece, Haskins seems to signal the presence of Haida culture in a few spare signs: “a mortuary board, a potlach pole,” a night watchman sitting on a log in South Moresby listening for “the breath of the Southeast wind.” Through the painter’s art and the poet’s, Haskins praises continuing Haida strength.

In “naked again he writes” Haskins walks us through the grand old days of CanLit. “How to Write a Canadian Poem” features “fireflies, blackflies, bones, stones, water, mirrors” as well as “history in trees” and inevitably snow – imagery that reminds us how far our literature has come from what now feel like billboard icons of nationality. A tribute to Steve McCaffery begins with the sound poet’s innovative vocals and goes on to analyze them in stanzas catching poetry’s ancient roots: “the rumble that chases/ tree-splitting lightning,” that “sings in the sleep/ of the poet’s/ pre-history” (“p’OM”). Sly and satiric, “Poetry in Tupperware,” mocks the notion of inspiration. Playing with a creative recipe that ranges from spaghetti to the song of the sea, Haskins bemoans the exhausting insistence of a muse that recycles scraps of dreams, miracles of nature, and literary devices in the never-ending effort to ‘make it new.’

The Great Canadian Poetry Weekend of 1980 – a major festival, held at Blue Mountain Resort in Collingwood, Ontario – gives us “Dorothy Livesay and the Cyclops” in which this tough poetry pioneer and foremother to so many is stranded amidst CBC technology and commercial interests, her voice “the thin plaint of imagination” asserting across decades: “The woman  /  I am.” Street poet Milton Acorn is a “wounded warrior” (“Poetry Reading”). Riffing on “The Pride” – John Newlove’s controversial treatment of colonization and prairie history – Haskins exposes the high cost of truth-telling, depicting Newlove as irascible, “sleep heavy” and proud, wailing his words – vodka-slicked and prairie-swept – like “harmonica blues/ blown by an accountant” (“Beyond the Pride”). This is an accurate portrait of a writer worn down and worn out by a major work that was largely misunderstood in its time. In “I am Not Your Man,” from a 2009 Jian Gomeshi interview, Leonard Cohen understands “rest is how the rust gets in.”

Robert Zend remains impishly true to his ground-breaking book Beyond Labels with the delightful absurdities affectionately parodied by Haskins in “Counting Down to Zero,” while “For Earle Birney,” depicts this grand old man of west coast poetry in solitary splendour at his typewriter, naked but for a hat “on the roof/ of his house in the bush/ in the heat.” With “The World Is Always Being Born,” Haskins catches the creative process on the move. Various poets and one goldfish circle through ecstasies of wonder, the fish swimming round her bowl in constant discovery, bobbing momentarily to hear bill bissett rattle and chant, then instantly off, “her eyes wide open/ her tiny brain always on” because “every pass is new.”

The sections keening calls and beneath the civil skin evoke powerful emotions with metaphorical precision. Haskins depicts marriage dying like starved old bitches. Heavy lifting eliminates “debris from twenty years of husbanding” (“Movers”). A father’s letter betraying his infidelity and discovered by his young son compromises innocence. A train, its guilty passenger choking on obsession, flees illicit passion, while “screaming to return to her,” (“Leaving Athens”).

Poems addressing the agonizing death of a second life partner from stage four lung cancer do not flinch, either from their subject or the demands of the art, while “Things I Do to Miss You” strikes infinitely human notes of farewell with such heartbreaking habits of familiar love as “park on my side of the driveway/ sleep on my side of the bed…dry myself with your bath towel…fill the feeder to attract a cardinal/ thank you when one comes.”

Maintaining a resolute strength of voice to the last line of Blood Rises,  Haskins’ “Aguas Calientes” declares defiantly, “I am defined by what my imagination eats.” His poetry pilgrimage has taken us to the top of the world and back on a fierce and tender journey.

Patricia Keeney is an award-winning poet, novelist, theatre and literary critic. The author of ten books of poetry and two novels, her writing has been translated into French, Spanish, Bulgarian, Chinese and Hindi. Her latest poetry volume, Orpheus in Our World (NeoPoiesis) connects ancient Greek lyrics with contemporary theatrical dialogue. Her latest novel One Man Dancing (Inanna) is a story of Africa, politics, art and personal survival set on the world stage. Her upcoming novel, Emptiness and Angels combines Biblical mystery, feminist satire and spiritual quest. Keeney is a longtime professor of Literature, Humanities and Creative Writing at Toronto’s York University. Website: wapitiwords.ca

David Haskins is the prize-winning author of This House Is Condemned, Reclamation, and over 150 published writings. At the age of eight, Haskins emigrated from post-war Britain to Ontario. For 36 years, six as Department Head, he taught high school English. Recently widowed, he has two sons, and drives a blaze orange 1970 MGB. He resides in Grimsby, ON.