The Blue Moth of Morning by P.C. Vandall, The Porcupine’s Quill, 2020. 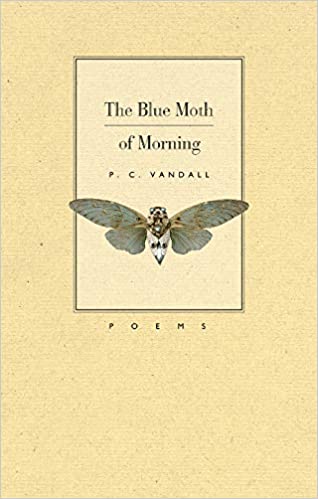 It wasn’t until I reached the last pages of The Blue Moth of Morning, in the section entitled Stage Four: Moth, that I began to understand the structure and/or intent of the poet and/or editor. Call me slow, but the significance of naming the book’s four sections – Egg, Caterpillar, Cocoon and Moth – stages instead of parts didn’t sink in at first.

Ohh, I thought, the stages refer to the stages of the moth’s development. (Can you tell I’m not very sciency?) Stages in theatres came next to mind; places where one can act out life’s dramas and triumphs. The stages of cancer. A stage can also be a place in which to pause and reflect. In French a stage means an apprenticeship. Up to the point of writing this book, Vandall seems to have achieved four stages in her life: childhood, adolescence, young marriage, post-marriage. The poet as moth.

And the book looks lovely. Until you notice, in the cover image of the brown-grey moth, soft and stark against matte yellow paper, that it is wearing flying goggles while rivets decorate its body in the style of steam punk. A delicate thing pumped and ready for take off?

And it was this duality that I kept noticing as I read the book. I’d read a few powerful, lyric poems, then one or more that seemed flip, facetious, or full of puns. Thus, my review’s title: Two Voices. Read on to see which voice I preferred, or if I even had a preference.

The first stage, Egg, is bookended by two poems that explicitly refer to eggs. In the first ‘Scrambled’ there is a scene of near or actual child abuse, depending on how you want to interpret the scene in which “…he tiptoes in // and brings a soft-boiled egg. He tells me / to slip it inside my mouth and hold it.” The abuser tells her she’s “angelic / with a milk-white egg in my mouth.” And there’s a threat in the last line as he says she’ll be “Beaten till scrambled if you tell anyone.” (Vandall’s italics.) So, if not abuse, certainly very, very weird behaviour.

Then, 11 poems on, at the end of Stage One, is ‘Spoiled Rotten’. The poet has left one egg in the carton in the fridge for ‘her’. Mum? The single egg infuriates ‘her’ and ‘she’ throws it onto the floor. “This isn’t about the egg or the carton / it came in. It’s merely a way to mask / the fleeting metaphor like a bandit.” ‘She’ knew about the abuse? The poet thinks ‘she’ should have?

In between these two poems, Vandall presents: herself as an adolescent failing to attract boys; Eve’s (in the Garden) contrasting artfulness at getting what she wants; child murder; geological disaster; hints of submerged family violence; and how, as an adult, and possibly because of all the preceding, the yoga class Vandall takes to relax isn’t working.

Stage Two: Caterpillar has more content related to adult relationships and more social, religious critiquing. That sounds tame, doesn’t it? Get ready for poems that are rough, rude, crude and cruel, sometimes all four at the same time.

There’s a lot of mockery of the men in her life here. The title of ‘Applesauce’ is explained at the end of the poem; instead of peaches that “were heady / and ripe; juicy and firm in sweet nectar”, she concludes “With you, it was more like applesauce.” I like applesauce but I suspect she’s telling us he couldn’t get it up or failed to finish. Rude.

In ‘Cougar Pie’ she makes fun of older women and the younger men who use and are used by them. “Your goal is to massage / the meat, making it easier to chew.” Crude.

I was more impressed by the two poems, ‘Good Girls Don’t Bleed’ and ‘Academy for Girls’. Really? We’re still being called out for having periods and the occasional period leak? And white women are still being called whores by men in the streets of the Middle East? My personal experience of both forms of shaming occurred a generation ago. Too bad for us, eh, girls?

I also liked the way Vandall works the metaphor in ‘Canehdian Jesus’. “Noah would build a shed, / Daniel would face a den of wolves and Joseph / would sport a fur coat of many hides.” Christ would find out “that walking on water // wasn’t such a miracle after all.” And the ending appeals. Though we’re nice Canehdians, we’d “kill him anyway.” Good dark poem.

There were a few poems about marriage in Stage Two. Stage Three: Cocoon is mostly about marriage. The titles tell the story: ‘Romeo, Romeo, wtf?’, ‘Matrimonial Cake’, ‘In a Rut’, and ‘When Did You Leave?’ I found some of the other poems more interesting.

‘Idol’ begins “Maybe she’s bored of being the Blessed Virgin,” moves through some wonderful images like “I imagine her lifting the veil and falling / like a rain cloud onto a street.”, and leaves Mary in a bar, wishing she could “tremble like wild / wisteria, throw olives into a parched wind / and no longer appear as the nun getting none.” Just this once, I’ll forgive the pun.

The gritty ‘Three Minutes’ likens the time it takes to perform a simple household task or “The time / it took my mother to make up her mind // to leave my father.” with cryo-surgery, “a steady stream // of arctic-blue liquid nitrogen / against my cervix.” And she asks, “I wonder if the earth aches / when it thaws.” Been there. Rough.

It’s in ‘Full of Crow’ where we get the first poem about being a poet, and it’s a dark one. What does eating crow mean again? Oh yeah, admitting one is wrong or defeated. Well, not much of that here – I mean in this poem – but plenty in previous ones. In ‘Full of Crow’ she seems totally in control; keeps crows in the freezer, dissects them, makes them into jam and sells them. I chose to think of the crows as poems; stored emotions and experiences, edited, published or read to an audience, as “she serves out a murder of crows, grinning // as they chew bitter sweetness.” The ‘they’ being the audience. Nice.

Things, as we might say, get better in Stage Four: Moth, though Vandall lives through death and divorce, and finding another man. It doesn’t really matter what ‘Hide and Seek’ is about. Just listen to this language.

Outside the snow bellyaches

soft and blue as flakes of sky fall silent

across a field where once lived a clear lake.

There’s a flat line where a fence used to be,

a line charcoaled in crows and geese. Ice curls

a snarled lip around the water’s edge.

The air is stone and the grass is rubble.

I can see the frostbitten docks, the quills

and prints. I can even see the shadows

that cast and vanish below.

Urban dystopia. Subtle and beautiful. More of this, please.

‘Disc Jockey’ contains some similar images from a scene of picking blackberries with her now deceased father. “There were patches of purple vetch creeping // up your legs and an unsung requiem / lingering between us.” Is she picking with him or is this a memory as he dies? Both, perhaps.

‘The Parking Stub’ at the hospital after his final ride there is kept to recall “the last time you held / my hand, my gaze, my heart, my attention.” Simple language, always best when it comes to death.

And more death in ‘A River of One’s Own’, which addresses author Virginia Woolf’s slide into oblivion. Here we get the title of Vandall’s own book.

Virginia, you are the blue

moth of morning, the sapphire wings of dawn

unfolding from the darkness and driven

towards the light. Did you brush the moon dust

from your pale wings?

And at the end of the poem

Did you emerge from the darkness to find

a place, however briefly, to rest,

before drowning in that diaphanous light?

Much as a moth, creative mission accomplished, rises toward the moon or a streetlamp, warms, worships, and dies.

There are many other poems in this collection I have not touched on. I tend to discuss more deeply the poems I like best. Other readers will have their favourites.

P. C. Vandall is the author of three collections of poetry: Something from Nothing, (Writing Knights Press, 2013) Woodwinds (Lipstick Press, 2013) and Matrimonial Cake (Red Dashboard, 2014). Her work has appeared in numerous magazines in Canada as well as England, Ireland, the United States, India, and Australia. She resides on Gabriola Island with her husband and two children.