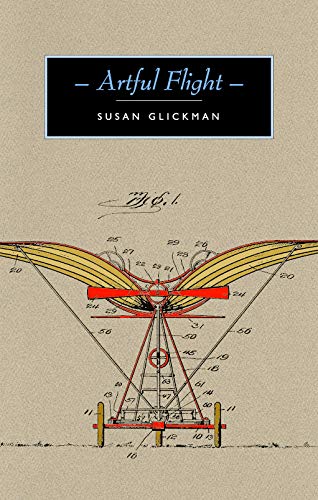 It’s what Susan Glickman brings together in her collection of essays and reviews spanning decades of thinking, writing and being in the Canadian literary landscape and the wider world.

In a clear-sighted introduction to this collection Glickman – a poet and novelist in her own right -is surprised at the “fugitive prose” she has accumulated over her professional life and poured into essays, a flexible form allowing her questing mind free flow. Fulfilling the promise of creative criticism, Glickman enters the imagination of her writers with sensitivity and knowledge. She participates in conversations that approach, at their most effective, a kind of co-creation, enlightening both author and reader and often the critic herself.

Artful Flight provides a deep dive into Canadian poetry and the poetry makers who shaped where we are as poets and readers today. Glickman gets inside how they did it. Through her combination of critical intelligence and poetic instinct, we are invited into process, a sharing of how (selectively) modern Canadian poetry means, articulated by someone who understands and appreciates it as well as practising it. Glickman’s poets are not just remembered but dynamically acknowledged, their fine lines of influence traced and refreshed with critical integrity, with immediacy and excitement.

Not only is Glickman clear she is courageous, contradicting that ‘eminence gris’ of CanLit, Northrop Frye on his early relegating of our literature to a ‘garrison mentality’ “because detached from European culture.” Nor does she shrink from clearly indicating throughout her reviews and essays where a poem soars and where, occasionally, it fails to fly. And often why she eagerly anticipates this or that poet’s next work. Glickman is seriously encouraging.

In sharp essays about craft, she sheds light on such topics as the use of the second person impersonal, illustrated in poems by Kim Maltman and Roo Borson. The technique, often “a sidelong wooing of the reader to enter into the experience of the poem as the fictional persona” is intriguingly slippery. Her discussion of the poetic line typifies Glickman’s incisive analysis: “The poetic line is where feeling and syntax meet” and “it is important to look at the way lines and sentences differ…in the way that they are articulated by the voice.” And although poetry must pay some deference to grammar, it “is always testing the limits of syntax to achieve more freedom for itself.” She speaks of “the accurate scoring of poetry,” that renders “the poem on the page an exact guide to reading.” Further, “poetry is never speech” but “the result of aesthetic design.” After an adroit dance through William Carlos Williams’s “Red Wheelbarrow,” she states simply that his language is not so much a function of the American Idiom as the way the poem insists Williams design the language it needs.

Glickman gets to the heart of her poets quickly. Robyn Sarah’s “aural symbolism.” Anne Szumigalski’s “mystical bent,” her Celtic narrative. Diana Hartog’s accessible personality comes through the “state of attentive wonder in which she composes her poems.” The consistently political poetry of Gary Geddes typically adopts the persona of a figure in an historic situation, skillfully balancing metaphor with exposition. In her assessment of the poet’s Selected Poems (1970-1995) Glickman urges him towards a freer exploration of this blending in his future work, citing how lyric and political have been powerfully fused by such poetic giants as Neruda and Forché.

She explores the politics of poetry found in Peter Dale Scott. “Coming to Jakarta: A Poem About Terror,” his many-canto’d epic is propelled by outrage at the CIA intervention in the politics of both Indonesia (with Sukarno) and Chile (with Allende) that ousted those leftist leaders. The poem’s political roots are also personal. Scott’s diplomatic and legal background (the “hidden agenda” behind his public face) propels his insistence, like Pound, on ‘a twentieth century poem that includes history.’

With her synthesizing vision, Glickman’s reviews generate literary ideas that reward scrutiny. She illustrates how “the Canadian use of documentary sources in Canadian poetry,” when not “transformed by the imagination,” fails, as opposed to the success of such sources in the seminal works of Atwood’s The Journals of Susanna Moodie or Ondaatje’s The Collected Works of Billy the Kid. Glickman takes us on a lively romp through the love poetry of Don Coles (K. in Love) and David Solway (Modern Marriage) both of which, in defining “the extremes of masculine psychology” are “books for grownups.” Coles is “all quivering adoration and breathless deferral” while Solway “makes no pretense of being nice.”

Glickman’s discussion of Michael Ondaatje’s “new and selected,” The Cinnamon Peeler (1993) begins with her disappointment that it contains only one new poem. Her explanation makes us look again at the value and function of any ‘Selected.’ “Ondaatje not only culls poems and reorganizes them to tell a new story…he does some serious editing of individual poems.” Further, “each time a poet selects from his or her works to compose a new representative whole, we have the pleasure of seeing literary autobiography being (re)-made.” This is the kind of critical thinking that enlarges our perception of the literary culture we think we know, reminds us of the substantial work it requires and how it changes.

Glickman investigates in great depth and detail the poets she feels have changed the landscape, articulating patterns over a range of work. In her essay on Don Coles’ Landslides: Selected Poems (1986) she remarks how his situations centre on “visual memory, usually provoked by an image,” how the speaker is a sort of Everyman exploring archetypal roles in a domestic narrative with an educated diction that is also quietly self-deprecating. Glickman characterizes the new poems in this Selected as beginning with “shivers of mortality” then transforming into “dream and fable. By contrast, Coles’ The Prinzhorn Collection freezes time and preserves a moment in history. These poems grant “the unmailed letters and drawings of the forgotten inmates in an insane asylum the serious audience of which they were originally deprived.” Always the conscientious guide, she suggests future direction: either towards a surrealism that continues to transcend the “narrowly personal” or the kind of “collective experience of history” represented by ‘The Prinzhorn Collection.’

Glickman is often a phrase-maker. Her detailed discussion of the Persian ghazal in the poetry of Phyllis Webb leads to such revelations as the “aesthetic androgyny” Webb discovered in the form and how it freed this metaphysical poet into a wilder flow of images, into process. Characterizing John Newlove as a “bruised idealist lurking under [a] nihilist’s spiky armour,” she spends a thoughtful essay comparing the strain apparent in poems that represent experience to the hypnotic strength of poems that become the experience. She distils the wide-ranging complications of Erin Moure: “a convergence of mysticism, feminism and socialism in an ethic of personal transcendence and an aesthetic of subversion,” a poet who deconstructs and reconstructs language (sensually, spiritually, politically) “allowing the individual to speak her particular truth and still be understood.” Glickman recognizes how Bronwen Wallace, whose poetic voice closely imitates ordinary speech is drawn instinctively to a narrative form that “accommodate[s] many voices” because “the truth is polyphonic and experiential rather than monophonic and absolute.”

In her final section, The Self in the World, Glickman shares personal and professional reflections revealing many selves. The fearless wanderer, the frustrated academic, the overextended mother, the ecstatic lover of music and the visual, all held in wrapt suspension by her joyful addiction to language. The range of lived experience – both difficult and enriching – and the embrace of art “as a form of attention” expressed in this book make for the best writers and critics.

Patricia Keeney is an award-winning poet, novelist, theatre and literary critic. The author of ten books of poetry and two novels, her writing has been widely translated. Her latest poetry volume, Orpheus in Our World (NeoPoiesis) connects ancient Greek lyrics with contemporary theatrical dialogue. Her latest novel One Man Dancing (Inanna) is a story of Africa, politics, art and personal survival set on the world stage. Her forthcoming novel, Emptiness and Angels: A story of the divine feminine combines Biblical mystery, feminist satire and spiritual quest. Keeney is a longtime professor of Literature, Humanities and Creative Writing at Toronto’s York University. Website: wapitiwords.ca

Susan Glickman’s itinerant lifestyle has included the study of classical civilization in Athens, yoga in India and English literature at Oxford. She has enjoyed a varied career as an educator, editor and academic, and has written over a dozen books in a variety of genres. She lives in Toronto.