What have we left to us?

Examining questions as a means of existential analysis in poetry 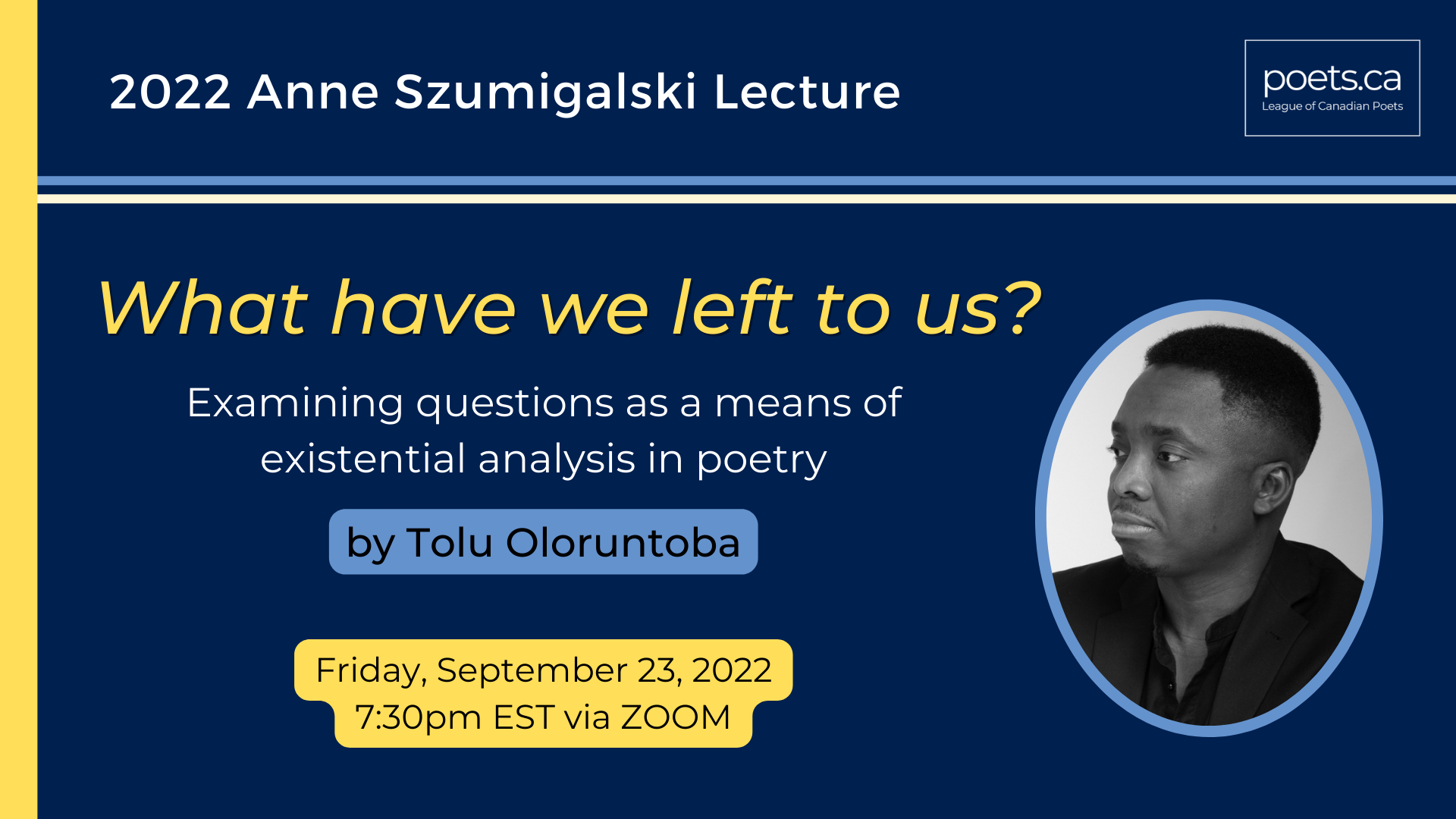 With this lecture, Oloruntoba explores questions as a means of existential analysis: What can questions show us about the deeper intents and potentials of poetry? How may we apply that to literary analysis and for navigating current times? Are the questions of the poets representative of their eras, or do they remain archetypal? From a close study of Anne Szumigalski’s oeuvre, Oloruntoba homes in on at least 77 of the questions posed by the lecture’s namesake. By exploring ten realms of questioning, including semantic, functional, philosophical, pedagogical, Socratic, scientific, research, rhetorical, and existential, the poet asks other questions: Can we find our way into deeper levels of poems by tracing their questions? What else could these powerful rhetorical nodes yield? Can this tendency help us navigate the world? And what existential answers are achievable when we ask better questions?”

Join us on Friday, September 23 at 7:30pm EST to ask these questions together with Tolu Oloruntoba – for answers and, of course, more questions.

Tolu Oloruntoba has been a physician, editor, and project manager, and has lived in three countries. His literary work combines existential analysis with historical and contemporary critique. His debut collection of poetry, The Junta of Happenstance, won the Governor General’s Literary Award for poetry in English and the Canadian Griffin Poetry Prize. He lives with his family in Semiahmoo, Katzie, and Kwantlen territories known as Surrey, BC. His second collection, Each One a Furnace, was published by McClelland & Stewart.

*Read these lectures in Measures of Astonishment 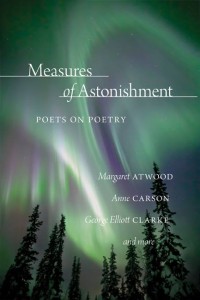 Check out your local bookstore to purchase a copy, or grab one online through McNally Robinson or Indigo!

ABOUT THE LECTURES
The Anne Szumigalski Lecture Series is generously sponsored by Jacques Nolin and Jennifer Boire.

The Anne Szumigalski Lecture Series is hosted each year at the League’s annual conference, commemorating award-winning Saskatchewan poet Anne Szumigalski. The lectures began in 2002, a few years after Szumigalski’s death, and are modeled after the Margaret Laurence series of lectures by distinguished Canadian writers.  Szumigalski was a mentor to numerous prairie poets and much loved in the literary community, especially in Saskatchewan and Manitoba. She was a founder of both the Saskatchewan and Manitoba Writers Guilds, and helped establish the literary magazines Grain and Prairie Fire.

As a member of the Saskatoon Poets’ Group in the mid-1970s, what I remember most about Anne Szumigalski was her presence. We would sit down in a circle and read our poetry aloud to each other. I remember especially the times at Terry and Carolyn Heath’s on Clarence Avenue, a house in which my wife and I later lived, and in which my son was born. I remember Carolyn’s sharp, perceptive comments, but I remember Anne’s more gentle criticism, as if just by being there she called into question any humbug and pretence I might parade out. This was something new for me, and dangerous – to share works in progress and invite criticism from my peers. It was exactly what I needed.

The Anne Szumigalski Lecture Series, proposed by Regina poet Paul Wilson in 2001 and approved by the League’s National Council the same year, commemorates the award winning Saskatchewan poet, who died a few years earlier. Szumigalski was a mentor to numerous prairie poets and much loved in the literary community, especially in Saskatchewan and Manitoba. She was a founder of both the Saskatchewan and Manitoba Writers Guilds, and helped establish the literary magazines, Grain and Prairie Fire.

The lecture series was modeled after the Margaret Laurence series of lectures by distinguished Canadian writers, long held as part of the Writers’ Union of Canada’s annual general meetings.

Since its inception in 2002, The Anne Szumigalski Lecture Series  has been a rich and ongoing dialogue among poets: a dialogue because, taken together, the lectures present a room where we can stand in the  doorway and listen as Tim Lillburn, Anne Carson, George Elliot Clarke, Margaret Atwood, Mark Abley, Don McKay, Marilyn Bowering, Anne Simpson, Glen Sorestad, Robert Currie and A. F. Moritz discuss the art and craft of poetry.

Soon, with the publication of an anthology of the first 11 lectures, we will be invited into the room, and shown to a cozy chair where we can follow at our own pace, go back pause and puzzle, read again,  be delighted, challenged, invigorated, charmed and exhilarated by the thoughts and musings of some of Canada’s best poets.

This is a book for student and teacher alike; for beginning poets and those who have found their voice, but mostly it’s a book for all  of us who are wise enough and lucky enough to find —no, to take the time to be engaged by these lectures.

Oliver Wendell Holmes said: A mind, once stretched by an idea, can never return to the same shape.

If ever an anthology could bend us out of shape, it’s this one. I am pleased and honoured to have been part of its development.