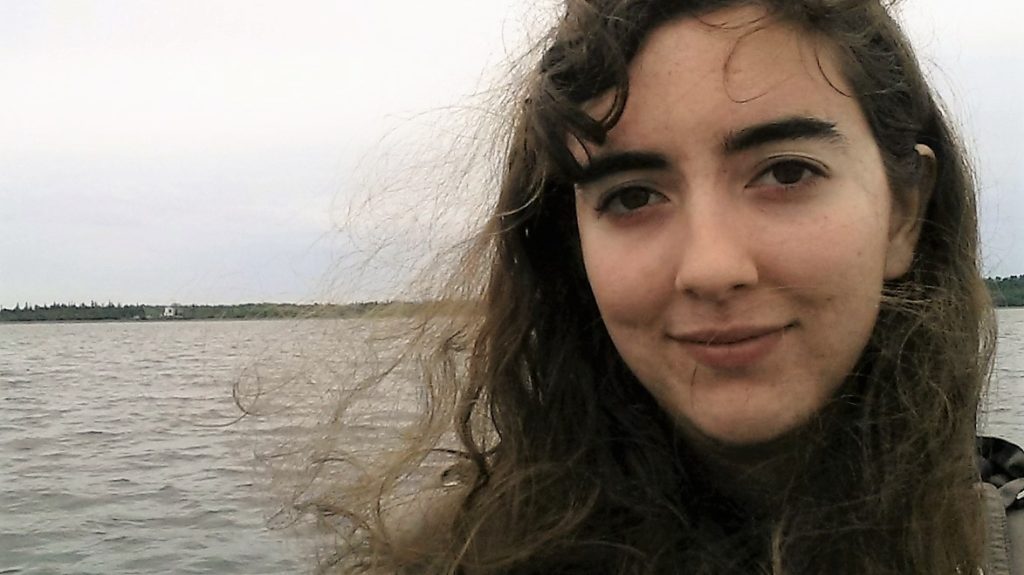 League member Leah MacLean-Evans lives on the unceded territory of the Algonquin Anishnaabeg people. She’s the 2017 fiction winner of the Blodwyn Memorial Prize. Her writing has appeared in Qwerty, untethered, Ottawater, On Spec Magazine, and elsewhere. She has an MFA in Writing from the University of Saskatchewan and is the proofreader of Grain Magazine.

We spoke with Leah  – the winner of our 2018 National Broadsheet Contest – about her writing practice, her winning poem, and what she’s working on now.

League of Canadian Poets: What made you want to submit to the broadsheet contest?

Leah Maclean-Evans: I loved Doyali Islam’s winning poem from last year, “cat and door.” It’s a poem I kept returning to. I love the use of space in that poem, and the way it captures such a familiar moment of distance between the speaker and the cat. I love cats, but I struggle to write poetry about them. When I see writing that I really connect to being given a platform, it makes me want to submit to that platform. Plus, I already belonged to the League, and there was a discounted submission fee for members.

LCP: How did/does your approach to contest submissions differ from your regular writing practice?

LME: Since contests usually charge submission fees, I think more carefully about where and what to submit than when I plan to submit to journals or other publishers. I don’t write toward contests, or any journal, I just look at what material I have already and cherry pick. For contests I try to send work that has already had positive feedback from editors, even if they haven’t accepted it. I think in terms of worst-case-scenarios: If I don’t win, is it a subscription that I would pay for anyway? Is it a journal I would try to financially support anyway? Is it a journal I want to be in, but I otherwise would have to wait a year to submit again? Usually I have to say yes to more than one of those things before submitting to a contest. Like many freelance writers, my budget is limited. I feel conflicted about paying contest fees. What do the fees support and who do they exclude? Sometimes it comes down to whether, on a particular day, it feels more like self-care to take the chance on myself and spend the money, or to save the money for something less uncertain.

LCP: Is there anything you’d like to tell us about your inspiration for your winning poem?

LME: I’m a survivor of sexual assault and a feminine-presenting cis-woman, and I’ve often felt that I’m seen as a woman first and a person second. In our culture, that can be dangerous. And then, as a kid I used to keep fish. I think the less human-like an animal is, the less of ourselves we project onto them, including our beliefs around gender. This poem is a wish to be seen for all the parts of myself, even those that fall outside the traditional bounds of my gender, like autonomy and resilience.

LCP: You write fiction also – how do you find the creative process differs between prose and poetry?

LME: For me, figuring out a poem is like following a rope until you reach the knot where ideas and experiences and words have snagged on each other. Writing fiction is like gathering pieces of rope and figuring out all the places to knot them so that they make a net. For both, there’s usually a long period of thought beforehand, and then the writing happens comparatively quickly.

LCP: What writing projects are you currently working on?

LME: I’m looking for a publisher for a novel I’m just finishing about a young woman searching for her sister, and her relationship with her new landlord, who is an elderly woman who’s developing dementia. There are strange magical things like a rogue deer that their neighbourhood and city counsellor become obsessed with. I’m also working on a series of poems about birth control and menstruation as they intersect with mental health and trauma, and another series of poems about farming RPG video games, three of which are forthcoming in Canthius. Since I’m wrapping up the novel, I’m exploring in a lot of directions at the moment.

Thanks to Leah for sharing her insight with us! If you haven’t already, be sure to read her winning poem Name Me After a Fish here.