Review by Stanley Fefferman, also found on Opus One Review 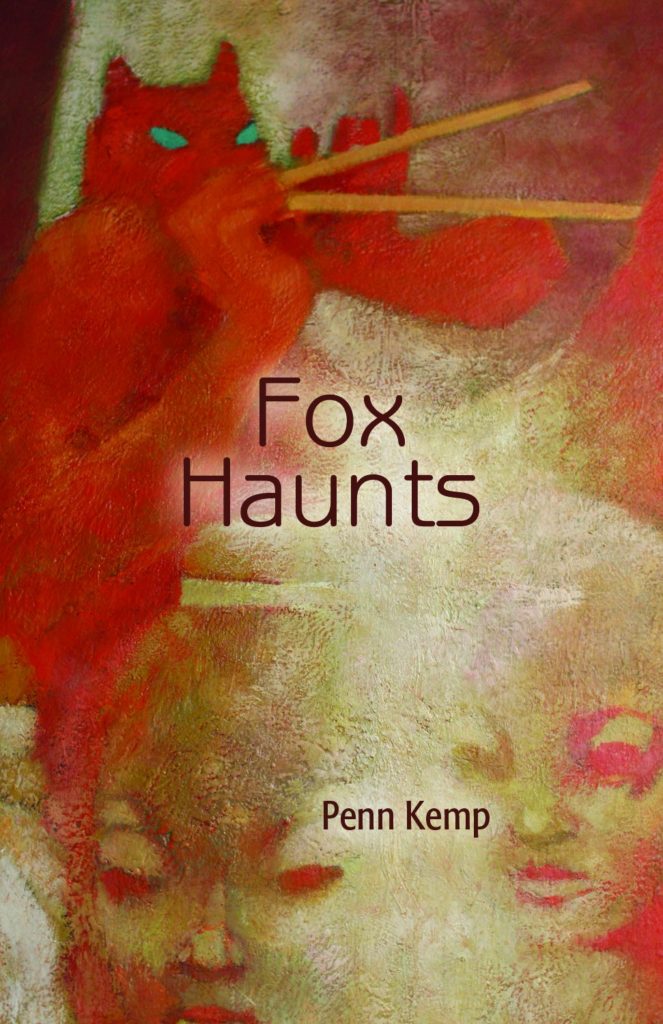 The way suburban garden fences are a line the fox crosses from the countryside to steal our chickens, is like the line fox, since time immemorial, has crossed from the countryside into our myths, into our dreams, into our literature and our language. Shenanigans is derived from the Gaelic word for fox. A skulk of foxes is the collective noun. Jimmie Hendrix sang of his “Foxy Lady.” And here is a stanza from Penn Kemp’s poem to Inari, the Shinto fox-god deity:

Fox girls dance beneath the twisted maple
caling their sister to tranform from mist
as beguiling women with red in their hair.

Fox Haunts is a meditation in 90 poems on a predator who is our closest neighbour and who is getting closer all the time as it’s habitat yields to subdivisions. The longest section of Fox Haunts, entitled “Urban Fox,” consists of poems about foxes Kemp might have encountered: her writing can be elegant.

Kemp empathizes with the drama of the hunt, the inside as well as the outside of it.

Fox circles her prey, closing in
on her victim in ever tightening
gyres. Her fixed glare freezes

Almost like peace. Soft as comfort,
this compliance in the fox’s grasp.
Just a single shriek before the

At her best, Kemp’s narrative and poetry are transparent. She has variance in her voice: sometimes she addresses her images directly to the fox:” I come upon your prints on/muddy path, neatly, deliberately splayed.” Sometimes, she drops into a journalistic mode and addresses the reader directly in what sounds to me like chopped prose: “Like Canada Geese, Fox may/be adopting city life to avoid/ hunters, the tough slog of/country life. Clever fellow.” Only to follow that with a passage of the most startlingly direct poetry:

They look upon the easy prey of pets, soft
and vulnerable bichon frisés left outside
by themselves in the yard, those with no
defense but a petulant, startled bark —

before they are meat, carried off dangling
in the soft jaw of a mother triumphantly keen
on feeding her kits.

Kemp is ‘entranced’ with the world of “Wily wiry trickster tales,” and devotes a section to ‘Fox’ references in the writings of Taliesin, Ovid, in the legend of Samson, in other Hebrew Scriptures relating to Solomon and Ezekiel, in Aesop, W.B Yeats and St. Exupéry, Akiro Kurosawa and Alice Munro whose father raised foxes for fur on a farm where he also kept ” Old horses in the barn waiting/their turn to be fed, to be feed.” As for the night sky, Kemp puts fox in the constellation Canis Major and Canis Minor, This bit of Fox arcana brings into close focus the mythical resonance of that beast in the human imagination.

After having the pleasure of reading Fox Haunts, and of writing down these few thoughts, I look forward to more hours with the book, looking into the stories behind lines like:

Fetch Laelaps, a bitch commanded to catch all

she chases. Let her seize that Teumessian fox!