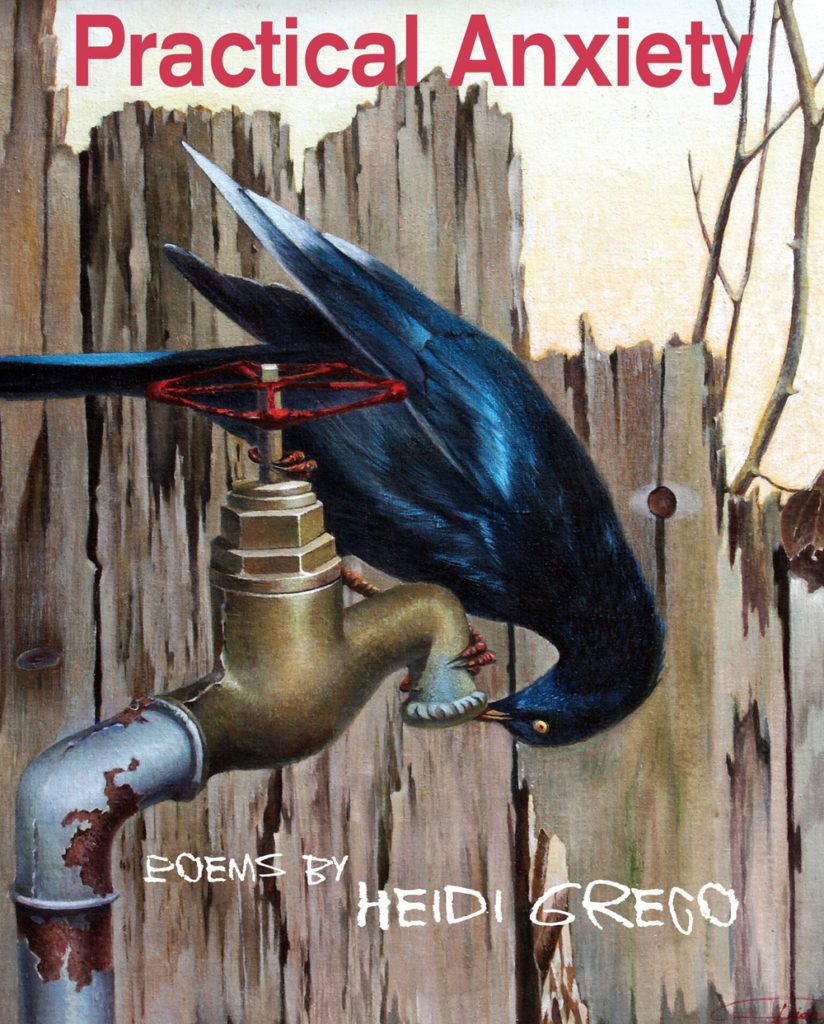 When Inanna Publications announced Heidi Greco’s newest collection Practical Anxiety, it blurbed that the poems “dwell in the hearth of domesticity.” I was intrigued by the title, especially if the poems might relate thematically to my own life as a suburban mother. As I began to read, I was startled. Greco’s somewhat dark slant was unexpected, but refreshing nonetheless. Even more, the craft of her writing was a joy. It was pure pleasure to see enjambment used sparingly for significant emphasis; stanza divisions that mirrored though tdevelopment; descriptions focused to pinpoint exactly “how” something looked or felt; and details well chosen to welcome the reader into the speaker’s personal experience. In short, Greco’s poetry was precise, concise, solid, yet sparkling. She could write about penguins on Mars, and I would enjoy her lines simply for their art.

In the opening section A STRING OF WORRY BEADS, the anxiety of the book’s title becomes clear. These are not sunny memories of childhood, but tap into uneasiness and risk. To underscore such feeling, many of the poems avoid resolution and are left open-ended. For example, in “Oh dear angel,” as the father’s car backs down the driveway, panic flashes. Will he run over little Dick and Jane? Or just in time, will the “pink-gowned guardian angel…Looking bored” redirect her attention from her “thick cigar, the tip of it hottest orange”? We are purposely left hanging. As well, usually pretty children’s images are turned upside down. In the dreamed “Land of the Sugar Plum Fairies,” the fairies with“purpled / skin like a deepening bruise” are “waiting in their tutus to leap onto the covers, grab me.”

Equally ugly, reality haunts children in other poems:a brother stillborn; a “carpet of black” flies “spreading germs”; a refrigerator abandoned in a field that might conceal the corpse of a boy; and small kids who tried to house and feed fireflies in a bottle growing into teenagers who ripped the bugs apart to smear on their jeans.

The next section THE MATHEMATICS OF ANXIETY extends this “sinister danger” into adulthood. Greco focuses closeup on domestic fears such as the unpredictability of lawnmower blades and the windowpane death of a hummingbird, all capped by health worries about blood in morning pee, twitching under an eye, and a hardening under the skin “somewhere lurking nasty, out of sight.”

GOOGLING FOR JESUS gives an uneasy twist to religion, “all those bits of heaven right between the eyes,” the final phrase eerily echoing a murderous bullet wound. However, in “Heaven is someplace and no place we know,” the speaker at least “takes solace from cutlery.”

Midway through the book, EARTH AS IT IS expands Greco’s vision into the realm of nature. “If a tree falls in the forest, I know before I hear it. / Connected, I bleed for it inside.” Now much of the imagery takes on a more lyrical quality, as in the beautiful lines “possible rain // coolness to bless us, kiss / the parched mouth of earth.” But the anxiety is still there in her contrasting what nature ought to be with its human desecration:

or nothing more substantial

to float on wind, disappear in a whim of flame.

INTO THE LIGHT at last introduces moments of serenity and quiet optimism. The full moon in April is so bright

sung with your fingers

sliding around the edge

of a glass half-filled with water

its tone long and clear

By the final section MOUNTAINS TO CROSS, even death is treated with tenderness. Greco writes about her mother:

with shining eyes she tells us

wings about to unfurl

The anxiety of earlier years has given away to a belief

that every holy bud will ripen as it rises, open

its blushing mouth, sing praises to the light, reassure my waning faith

in hope and second chances, reaffirm the promise of springtime.

As well as the thematic ascension from anxiety to relative peace, what makes these poems so compelling is Greco’s mastery of language. Her lines are tight, every word counts. Note the vigour of her verbs in “Relentless” and the attention to detail.

The day the tide rose, it swallowed the beach slowly

thencrept along the bricks of the city promenade

fingered its way across the road,insinuating salty paths

Her imagery illuminates. Consider these examples from “River of salmon, river of dreams:” “she laid her cache of eggs in the secrecy of gravel;” “bony hands of wild salal;” ”remembering / promises made. They flick their tails, / swish off, dive deep, energy renewed” and “sides as bright as if aflame, blood-ruddy.” As well as pictures, she evokes sounds: “a name / with zing of salty tang: sailfish, saltman, salmon” and “the salmon run assembles // a horde of silvery murmurings.” Elsewhere, my favourite example for its sound effect is “the light-slicked surface of rain-rinsed streets.” The repeating “s” sound makes the splashing audible.

Nor has Greco ignored the sense of touch. Describing an autumn leaf in “On the wane,” she offers lines tactile enough with harsh “c” and “r” sounds to make fingers curl:

it basks in scarred light

cast by the cratered moon

each crevice reflected in ridges

of its own veined skin.

“Morning Commute, Vancouver” even gives personification a twist. Greco describes both humans and fish in terms of each other, as a salmon

…swims along the freeway

beside the rest of us of the working-class fish, climbing

corporate ladders, half past six.

On a larger scale, Greco’s layout on the page, be it the extension of a line, or the shape of a whole stanza, visually reflects, and so supports, both rhythm and the advancement of thought. Even the structuring of the entire book, from anxiety to calm, and from childhood through adulthood, then death, to “my next life” is satisfying in its parallelism.

But I do take issue with Greco on one point. Her concluding lines in “The poem I am not going to write” insist “the books deserve better / poems than I can write today.” I respect her humility, but dispute the words’ veracity, for what she has published as Practical Anxiety is already of the best order and an inspiring demonstration for all who would improve their own art.